Attentive Child is advertised to support attention, focus, and improve school performance in children suffering from an attention disorder.

2) The Company Behind Attentive Child

Attentive Child is made by the American manufacturer Source Naturals[4].

The company was founded in 1982 by Ira Goldberg with the goal to support each individual’s potential to enjoy optimal health. Source Naturals pioneered the concept with Wellness Formula, now one of the best-selling immune support supplements in the United States.

Today, the company offers more than 600 high-quality products specially formulated to help individuals support their overall health and deal with a wide range of health conditions. 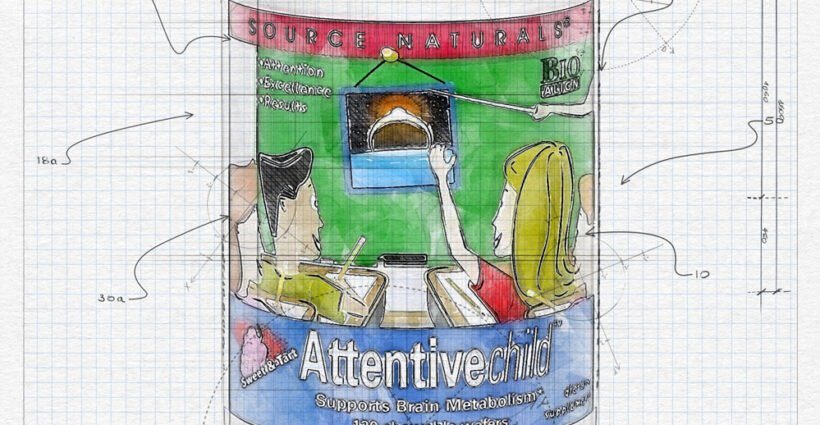 Attentive Child contains an array of nutrients that may help children calm down and focus better.

It contains DMAE, a substance typically found in the brain, shown to help enhance mental concentration.

Since acetylcholine plays a crucial role in many brain functions, such as learning and memory, proponents allege that taking DMAE in supplement form may boost brain health by raising acetylcholine levels. [5][6]

Magnesium is involved in over 600 cellular reactions, including muscle function, activation of B vitamins, muscle relaxation, and the nervous system’s functioning.[8]

L-Aspartate, an amino acid, acts as a neurotransmitter to stimulate receptors that are believed to play a role in memory and learning. However, this amino acid is rarely used in dietary supplements intended to support cognitive functions.

Some Attentive Child claimed benefits include:

5) Is Attentive Child Safe for Everyone?

Attentive Child is advertised as safe to take with no noticeable adverse effects. However, the formula contains several ingredients that may cause mild side effects in some users.

Depending on your child’s tolerance, they may experience:

Magnesium is LIKELY safe for most users when taken appropriately. In some people, magnesium might cause stomach upset, nausea, vomiting, diarrhea, and other mild adverse effects.

When used in substantial amounts (greater than 350 mg daily), magnesium may be potentially dangerous.

6) What You Need to Know Before Taking Attentive Child

Attentive Child contains grape seed extract, which might act as an anticoagulant, or blood-thinner. It could increase bleeding risk if taken with other blood-thinners such as warfarin (Coumadin), clopidogrel (Plavix), or aspirin[22].

Magnesium may also interacts [23] with some prescriptions, mainly with antibiotics such as:

7) Where to Buy Attentive Child

Attentive Child is available for purchase in several different packages:

9) How to Take Attentive Child

10) What Users Are Saying

"I absolutely LOVE these!!! My son has issues paying attention in class, and he's never been officially diagnosed with ADHD, but I'm sure he would be if tested. He takes two in the morning on the way to school (he's six), and I can always ALWAYS tell the difference. When he doesn't take them, he has a note from the school on something going wrong." [Read full review]

"Very pleased with these wafers. My son was on prescription meds until a friend recommended these. We were paying over $100 a month for his medication. We are happy to be away from the prescriptions and on this product." [Read full review]

"My child could not stand the taste, and it did not help with his attention issues at all. Though this did not work for us, I still would recommend trying it for other children. My son is diagnosed with ADHD and is on prescription medication, so this didn't equal what he usually takes." [Read full review]

Attentive Child markets itself as a children’s brain supplement. The formula is designed to improve focus and primarily maximize cognition or memory.

While the intent of the supplement is good, we’re not certain that a child’s brain would be receptive of the formula or if this kind of supplement would actually benefit kids.

The formula does have studies to back up its claims, but your child’s pediatrician’s advice should be given priority when it comes to any form of children’s supplements outside of basic vitamins and minerals. 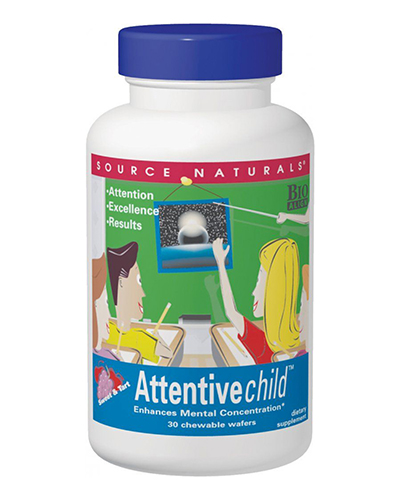 clear
Q:
What does Attentive Child contain?
A:

Q:
Attentive Child is all about what?
A:

Attentive Child is advertised as a potent focus and attention supplement designed to support the multiple systems that affect children's neural and cognitive function like neurotransmitter synthesis, brain metabolism, and nerve cell communication.

Q:
What are the Attentive Child side effects?
A:

Attentive Child is advertised as safe to take. However, some individuals may experience mild adverse effects due to the ingredients in this formulation.

Source Naturals Attentive Child can be purchased from most local stores, supermarkets, and online retailers like Walmart, Amazon, eBay, Costco, Target, and eVitamins.

Q:
How much does Attentive Child cost?
A:

Q:
What are the advantages of taking Attentive Child?
A:

Attentive Child is advertised to support attention, focus, and improve school performance in children suffering from an attention disorder.

Attentive Child is a popular dietary supplement for attention and focus. The formula includes several proven and well-researched ingredients and it has received many positive reviews and testimonials from happy customers.

Overall, this dietary supplement may work well, especially if you are looking for a more natural, less harmful approach.

Attentive Child contains ingredients that may interact with certain prescriptions (especially antibiotics) or alter the way the prescription medication works. We recommend consulting a pediatrician before giving this supplement to your child.

Q:
Does Attentive Child work better if taken in conjunction with other supplements?
A:

Source Naturals Attentive Child can be taken with other dietary supplements. However, we recommend consulting a healthcare provider before mixing several nutritional supplements.

Q:
Can I give Attentive Child to my child?
A:

Attentive Child is intended for children and teenagers ages 5 and up.

Attentive Child doesn't contain any potentially dangerous or banned ingredients. However, it contains soy, which is a known allergen.

Q:
Who uses Attentive Child?
A:

According to Source Naturals, this dietary supplement was specially formulated for children who have difficulties staying focused and paying attention in school.

Q:
Is Attentive Child recommended for pregnant or nursing women?
A:

If you are pregnant, may become pregnant, or breastfeeding, consult your health care professional before using this product.

Q:
How should I take Attentive Child
A:

Q:
What is the fastest way of contacting Attentive Child customer support?
A:

Q:
Can I return Attentive Child?
A:

Source Naturals sells through a number of online and offline retailers (local stores and supermarkets). The return policy depends on the store you purchased the product from.

Most buyers are happy with this supplement. However, some consumers complained about the product being ineffective and mild adverse effects.

Q:
What other people say about Attentive Child?
A:

Attentive Child reviews and testimonials on Amazon are positive. The supplement is rated 4 out of 5 (695 ratings), with 70% of the users rating the product with at least 4 stars.

Q:
Who is the company behind Attentive Child?
A:

Attentive Child is made by Source Naturals.

My daughter was sick for 6 months with vaginal ulcers when she was taking this product, as soon as I stop giving her the pills the infection stop.

Can’t say that it differs significantly from other products of its type. I gave this to my youngest daughter and didn’t notice any type of change, not even after two months of treatment so I don’t feel like it was worth it.

I have a five year old daughter that usually forgets where she puts her toys, when it’s time to eat and other minor things like this. But given that I’m a concerned parent, I decided it’s time to take some measures so I bought this supplement. It’s been a month since I first gave them to her ( I opted for the wafers version) and I must say I’m pleased with the results. She almost never forgets anything an she is more focused on what she’s doing rather than drifting away to who knows where.

I ask my friend abou this product
And now I scare to give to my son
No. Absolutely not.
(1) deceptive marketing when it comes to 4 of the ingredients. I would not use that product as an adult and especially for children. Loopholes in regulations allows this to be marketed this way. Sad and unfortunate – at the expense of health and profit for this company;
-additionally –
(2) fructose and xylitol both impact blood sugar levels. Any artificial sweetener makes the body release insulin anyway for reasons not appropriate to explain in text.
Fructose has a major influence on the rise of diabetes and obesity in this country… Fructose helps create insulin resistance especially when ingesting other types of sugars during the day.
This product’s statement about “low impact” on blood sugar levels is a deceptive marketing ploy using semantics.
(3) the method for synthesizing phosphatidylserine regarding this product is very cheap and highly industrialized… Very low chance of absorbing PS (phosphatidylserine) plus the soy should be a huge no no with children period. High impact on hormones, especially sex hormones while in development.
Anyway… There is more but i think you will get the jist..
That product will absolutely not help a child focus
It is also the wrong way to use PS (phosphatidylserine)…. But because it seems clinical, scientific, and trendy, it is somehow good? PS is a good product but under a different application and processed more efficiently and not the cheapest way possible to maximize company profit…

Gave this to my son for 3 weeks, caused extreme anger and memory loss/focus. It did exactly the opposite.

Attentive Child works! My 9 year old son has been taking 2 wafers every morning with dramatic results! He has an IEP for a specific learning disability and was tested as having the inattentive form of ADD. His teachers have all been amazed. His concentration and focus in school and on the soccer field are now fantastic! Even things that would otherwise frustrate him or make him angry have simply not bothered him any more. He said he can now concentrate without trying, he just can. I am so happy our pediatrician recommended this product! We tried 3 different ADD drugs and they all made him sick and lethargic. What a breakthrough discovery! Now they need them for adults!!

Thanks for your review. I’m going through the same thing with my 9 year old. He is so inconsistent with his grades. I know he can do it but just can’t seem to focus and stop daydreaming. Thanks for sharing. How long before you saw a difference? We’re only on day 4 so I’m sure it may take a little while.