Curcumin C3 Complex with BioPerine is a nootropic supplement which promises to give you a potent dose of turmeric and its antioxidant properties. It’s sold by California company Doctor’s Best, located in Orange County on the west coast. The company says they were founded in 1990 and offer more than 200 products. Their dietary supplements are supposed to be backed with solid research and high quality ingredients. Because of their longevity, Doctor’s Best is often regarded as a trustworthy brand. They might, on occasion, be older than some potential customers.

2) Is Curcumin C3 Complex Right for You?

Unlike traditional turmeric products, this contains two patented ingredients. The first is a Curcumin C3 Complex. This is a turmeric root derivative standardized to contain at least 95 percent curcuminoids, which is notable because most turmeric products don’t have this amount of curcuminoids. These enable your body to take in curcumins. Curcumins are essentially antioxidants found in turmeric, which give it its trademark bright yellow color.

The second ingredient is BioPerine, a black pepper (piperine) extract which is pretty popular in supplements like this one. It helps your body absorb the curcumin found in turmeric, which normally has a relatively poor bioavailability. BioPerine contains 95 to 98 percent black pepper extract, unlike other forms which can include trace ingredients. You should ask your doctor about BioPerine before using any supplement with it, unless this will be the only daily supplement you take. As a nutritional supplement it’s supposed to increase the absorption of various nutrients. It may also help your immune system and moods, but many of its effects haven’t been conclusively proven through medical research. But because of how it increases absorption, it could impact other supplements or medications you’re taking. To be safe, check with your doctor.

3) What Curcumin C3 Complex Does?

5) How Much Does Curcumin C3 Complex Cost?

Bottles contain 120 capsules. If you take two a day, that’s a two month supply. Because this product is concentrated beyond the typical turmeric supplement, you can probably do well on just one capsule a day, which further reduces a reasonable cost. The price is lower than some similar products, and wouldn’t be considered expensive unless you take 3 to 4 capsules daily for some reason. Some people might need to, but only with doctor’s orders. The average person will get 2 to 4 months of use out of this product.

6) How to Take Curcumin C3 Complex

Capsules of Curcumin contain turmeric root and black pepper extract (as BioPerine). The turmeric is interesting because it’s not simply root powder, as most supplement companies use. It’s a patented form called Curcumin C3 Complex. This includes curcumin, bisdemethoxy curcumin and demethoxy curcumin. Turmeric is a plant from the ginger family, native to southern Asia. It’s best known as a spice, one of the main ingredients of curry, and as an ingredient in traditional medicine. It’s also known as a natural dye which can give a strong yellow color to condiments, clothing, and cosmetics. The root has been used throughout history for a variety of conditions, including heartburn and stomach pain. Some people apply it to their skin for sprains, bruises, and other surface problems. Turmeric is possibly effective for fighting high cholesterol, osteoarthritis, and itching. There are a lot of studies about turmeric and it does look to be a very useful type of supplement, especially for reducing inflammation and pain. Its antioxidant properties also can’t be overstated.

Overall, this is a decent supplement for a decent price. Curcumin is a supplement with the potential to relieve soreness, aching joints, inflammation, and more. Some people find that it’s an effective brain boosting nootropic, although this is a little less common. Usually turmeric is used as an antioxidant which can assist with joint health and some pain. Some people rub it on their skin and says it does wonders, but there are a lot of things which turmeric does. If you suffer from chronic aches and pains, and common pain medications aren’t doing it for you, you might want to try a turmeric supplement like this one. 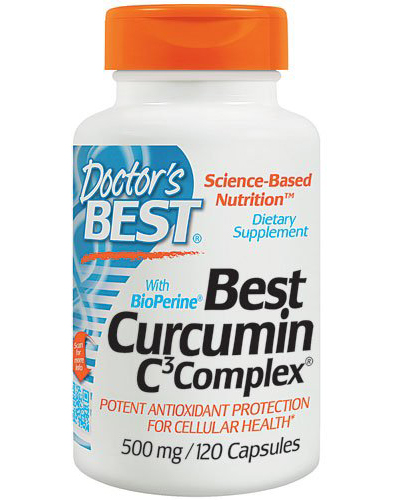 It doesn't work for everyone, but that's something which just happens in the supplement world. Everyone is built differently, so a general formula can't help everyone. But it can help a large portion of people. A good supplement tends to work for about 90 percent of people, if not more. Fewer than 15 percent of a product's reviews should be negative reviews. With this product, most people are indeed satisfied. A few people have said this not only reduced inflammation and pain, but it reduced cholesterol levels and improved focus. Turmeric can do a lot for you and Doctor's Best has put a decent product on the shelves.