Zarontin is a prescription drug claimed to be effective in reducing seizures and epilepsy treatment. It is presented as an anticonvulsant succinimide indicated for the control of absence (petit mal) epilepsy.

Zarontin’s manufacturer is Pfizer, an American multinational pharmaceutical corporation and one of the largest companies in this industry, worldwide.

It has been established in 1849 and started out as a chemical business producing and selling a single product, the antiparasitic called Santonin. The company has been involved in several lawsuits, such as illegally marketing several drugs or unapproved human testing with experimental drugs.

The presence of multiple, potentially fatal side-effects recommends Zarontin as a drug prescribed mostly as a last resort treatment when another medicine has failed to return positive results.

Zarontin is a prescription drug based on the active ingredient ethosuximide, a substance used alone, or other medications to prevent and control a specific seizure type.

The mechanism of action is by controlling the brain’s abnormal electrical activity, which occurs during a seizure.

More severe side-effects include increased risk of suicidal thoughts or behavior in patients using for any indication, severe liver or renal damage, and clinically proven cause for elevated incidence of children with birth defects born to women who used ethosuximide during pregnancy.

3) Is Zarontin Right for You?

Zarontin is commonly prescribed for the treatment of absence seizures. It is stated to help reduce the chances of a seizure occurring for someone who has epilepsy.

Unfortunately, experts don’t always know what causes the seizures. Still, they have been able to devise medications that can reduce them or completely stop them since there isn’t a cure for epilepsy.

According to the manufacturer, Zarontin works by changing the spike pattern and wave in the brain that usually would occur every 3 seconds.

There have been many studies and trials with this medication. What has been noted is that many patients start to have normal EEG results after a few months of use. The National Epilepsy Foundation has promoted the use of this medication.

The manufacturer also claims that Zarontin is safe for both children and adults. It is offered in a liquid form for children and a tablet form of 250 mg for adults. The dose of this medication depends on the severity of the seizures. Some people take it once a day, and others have to take it three times per day.

Zarontin is an expensive form of treatment of epileptic seizures. However, most health insurance programs and prescription coverage plans will pay for it. There could be deductibles and co-pays that a patient is responsible for. It will depend on the exact levels of coverage for a given plan.

The dose after that must be individualized according to the patient’s response, but only as prescribed.

Zarontin (ethosuximide) is a drug prescribed to control absence (petit mal) seizures, also known as epilepsy. However, ethosuximide, when used alone in mixed epilepsy types, may increase grand mal seizures in some patients.

The product’s effect consists in reducing the frequency of epileptiform attacks. It is a prescription drug that should be used with extreme caution and only under a healthcare professional’s supervision.

As with other anticonvulsants, it is essential to be very careful when increasing or decreasing the dosage and should be done incrementally. Abrupt withdrawal of anticonvulsant medication may aggravate absence (petit mal) status.

Zarontin may impair the mental and/or physical abilities (alertness, clear thinking) required for the performance of potentially hazardous tasks (driving a motor vehicle). 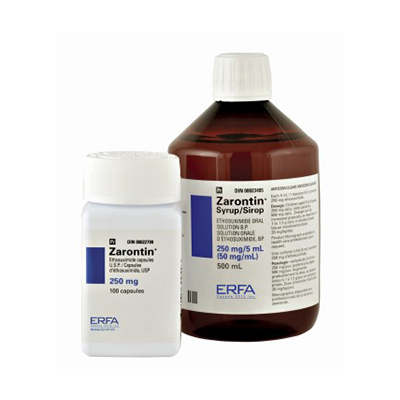 clear
Q:
What are the Zarontin ingredients?
A:

Q:
What is Zarontin supplement?
A:

Zarontin (Ethosuximide) is an anticonvulsant succinimide drug approved by the FDA. It is prescribed in the treatment of absence epilepsy (also known as petit mal epilepsy).

Zarontin (Ethosuximide) acts by bringing balance in the electrical activity of the brain. The drug is not recommended to those who experience hypersensitivity when using succinimides.

Zarontin (Ethosuximide) should also be avoided by people who have hereditary blood disorders.

The company indicates that this product may be taken for the treatment of absence epilepsy. Many users have reported that the product works well and with few side effects.

People looking for an all-natural solution or one deviating from prescription medications may find that this isn't the product they're looking for.

As there are no known medicinal cures for epilepsy, it might be beneficial to take the natural approach to reduce unwanted side effects.