Whole Health’s Ginkgo Biloba is advertised as the highest quality ginkgo available at any price. This herbal supplement is claimed to improve memory, reduce stress, improve concentration, and reduce the symptoms associated with mild to moderate depression.

The company that offers this product is Whole Health, a company with a long history in developing, producing, and selling a broad range of natural supplements, multivitamins, and herbal extracts. According to the company, all of their products are manufactured in the United States under the FDA’s current Good Manufacturing Practices.

There is a 60-day refund policy offered for this product. A customer has to contact the company to obtain the RMA verification. Then he has ten days to return the product for a refund. Returns are limited to one opened package of any item.

2) What Does Ginkgo Biloba Do?

Ginkgo Biloba Whole Health is an herbal remedy that is advertised to contain a high Gingko Biloba extract concentration.

This plant is gaining recognition as a brain tonic that enhances memory because of its positive effects on the vascular system, especially in the cerebellum.

Ginkgo Biloba is believed to work as a blood thinner to increase blood flow to the brain and blood vessels that supply organ systems. It is also thought to increase metabolism efficiency and boosts oxygen levels in the brain.

Although not definitive, there is promising early evidence supporting the use of Biloba for memory enhancement in healthy subjects, reducing chemotherapy-induced end-organ vascular damage, altitude (mountain) sickness, age-related eye disorders, and symptoms of premenstrual syndrome.

The herb is well tolerated. However, people with epilepsy (or anyone with a history of seizures) should avoid this plant because it may increase seizures frequency. There have also been some cases of high blood pressure in people taking ginkgo.

The use of Gingko Biloba has been associated with several unwanted side effects: skin reactions, headaches, dizziness, gastrointestinal problems, and bleeding complications.

3) How Much Does Ginkgo Biloba Cost?

Whole Health’s Gingko Biloba is one of the cheapest products of its type available on the market. One bottle contains 120 capsules, which should be enough for one month of treatment for the average user.

Whole Health is a company with a good reputation among its customers. Many people have found success in using Ginkgo Biloba to help enhance memory.

It is essential to understand that getting the right mixture isn’t always a simple task because everyone is different and needs varying strengths of this blend. 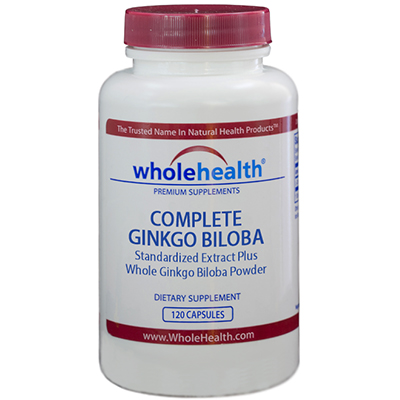