The main components of Vitamin Code Raw Antioxidants are vitamins, minerals and nutrients which are recognized as powerful antioxidants. The formula manufactured by Garden of Life includes Vitamin A, Vitamin E, Vitamin C, Selenium, Glutathione and Superoxide Dismutase to name just a few ingredients, all studied and demonstrated to be free radical scavengers.

The manufacturer mentions that the formula will benefit vital body systems, organs and functions, such as cognitive function (memory and concentration), the immune system, the heart, breast and prostate and skin and eyes. According to the manufacturer, the nutrients included in the formula are obtained from raw food. Additionally, the supplement is gluten, dairy, binders and fillers free.

Garden of Life is located in Florida, United States and has a vast market experience. It manufactures nutritional formulas with the declared purpose of promoting a healthy lifestyle and overall well being. They’re also the company behind multivitamin for women Vitamin Code Women.

Selenium is a mineral with remarkable antioxidant properties. Its special property of replenishing the supply of other antioxidants once inside the body makes it one of the most important nutrients. Research credits Selenium for benefits such as enhanced mood and cognitive function, increased mental clarity and energy levels, as well as cancer-fighting properties.Selenium deficiency is believed to be one of the causes that lead to depression symptoms, poor cognitive function, or memory problems. Also, Lack of sufficient amounts of the mineral may increase the risk of postpartum depression, and Alzheimer’s disease. The daily dosage of Selenium should not exceed 400 micrograms.

Glutathione is naturally synthesized in the live and is responsible for DNA and, protein synthesis, metabolism of toxins, amino acid transport, and prevention of oxidative cell damage. Research on the substance is incipient. Glutathione may help prevent heart disease, memory loss, Alzheimer’s disease and Parkinson’s disease.

Vitamin Code Raw Antioxidants is a blend of vitamins, minerals and other nutrients with powerful antioxidant properties. The formula is claimed to deliver complete Vitamin A complex, vitamin C, vitamin E complex and Selenium along with other antioxidants including Glutathione and Superoxide Dismutase (SOD). Vitamin E is known as one of the most powerful natural antioxidants. Numerous research studies have investigated its ability to fight free radical damage. One randomized, double-blind study was able to demonstrate that regulated intakes of antioxidant medication particularly Vitamin E may help reduce the neuronal damage and slow the progression of Alzheimer’s disease. Encouraging evidence shows Vitamin E may delay the onset if not even prevent neurodegenerative disorders such as Parkinson’s disease, mild cognitive impairment, Alzheimer’s or dementia. Also, Vitamin E may prevent the thickening of blood vessels walls and prevent the oxidation of bad cholesterol.

Superoxide dismutase (SOD) is an enzyme naturally found in the majority of living organisms. This enzyme is a potent free radicals scavenger; hence studies have focused on demonstrating its antioxidant benefits. However, the Effectiveness of oral supplementation with SOD is a matter of debate. Preliminary evidence suggests SOD may be helpful in reducing heart disease risk, detoxify brain cell tissue, boost production of immune system cells, and delay neurodegenerative processes which lead to Alzheimer’s disease and Parkinson’s disease.

The manufacturer recommends taking one soft gel daily. There are testimonials posted online about Vitamin Code Raw Antioxidants. What is being stated includes:

6) How Much Does Vitamin Code Raw Antioxidants Cost?

This is an average priced antioxidant formulation. A 30 pills bottle (meaning a month’s supply) costs roughly $20, no discounts applied. The price is a little higher that competitor products with similar ingredients. However, if the product is purchased with a price discount or a promotional offer, the price may decrease significantly. The manufacturer does not sell directly to consumers but uses a network of online retailers and stores to distribute its products.

The manufacturer recommends taking one tablet of Vitamin Code Raw Antioxidants daily. There is an extremely limited number of consumer reviews, insufficient for us to be able to draw conclusions regarding consumer satisfaction, potential side effects and effectiveness.

Vitamin Code Raw Antioxidants offers a potent combination of some of the most natural antioxidants, so that the body can fight the harmful effects of oxidative stress. Although there are no consumer reviews to testify to the formula’s effectiveness, there is plenty of research available on its ingredients to confirm that the formula will accomplish its advertised benefits at least for some consumers. It is our strong recommendation as always that you consult a healthcare provider when deciding to use any dietary supplement. 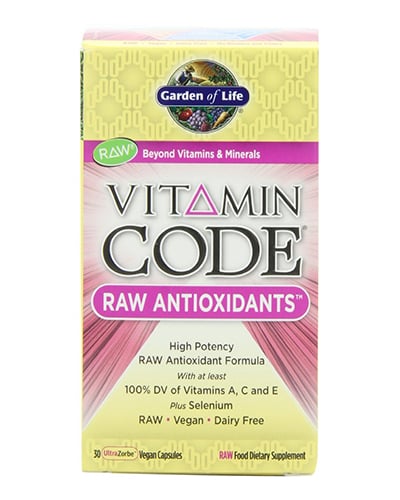 clear
Q:
What are the core ingredients in Vitamin Code Raw Antioxidants?
A:

Q:
What is Vitamin Code Raw Antioxidants?
A:

Vitamin Code Raw Antioxidants features Vitamin, A, C and E, Selenium, Superoxide Dismutase and Glutathione in a formula advertised to assist with heart health, the immune system, memory and concentration, prostate and breasts etc. Many of the ingredients contained by the formula manufactured by Garden of Life are used to prevent or delay onset of mild cognitive impairment, memory loss, Alzheimer's or Parkinson's, as well as to fight other conditions caused by oxidative stress (stroke, cancers, etc). Vitamin Code Raw Antioxidants is free of gluten, dairy, binders and fillers.

Free radicals may cause serious damage if not counteracted by antioxidants. From heart and blood vessels diseases to cognitive impairment, they all have been attributed to oxidative stress damage. The body is exposed to free radicals every day as a result of normal processes that take place inside the body. This is why protection is needed permanently. Vitamin Code Raw Antioxidants did not receive numerous reviews, and it is impossible for us to evaluate its Effectiveness. The ingredients have been however the topic of research studies which back up their antioxidant effects.

I think these are expensive, especially since they did nothing for me. I expected to feel better overall, but after one month I noticed no difference. I switched to another formula.

Some dietary supplements work better/faster than others. Usually, we recommend giving a new formula at least 30 days to show the first positive results. Furthermore, each individual is different. While the manufacturer may claim that a supplement will offer immediate results, from our experience, in most cases, that doesn’t work. So please allow at least one month for Vitamin Code Raw Antioxidants to work.

This is a good product that provides al nutrients in an easy to swallow pill. I\’m almost 60 and i take these for prevention and maintenance.