Ultra Cordyceps is a nootropic supplement which can be used for respiratory system health, reducing the effects of aging, and more. It’s sold by California company Doctor’s Best (sometimes known as Doctor B Vitamins). They were founded in 1990 and offer hundreds of individual products, including dietary supplements. The company says everything is rigorously tested for quality, with all products manufactured in cGMP facilities. Some ingredients are important, but every supplement formula appears to be made in the United States. Cordyceps is of interest because it has a lot of potential uses and just about anyone can take it.

The only active ingredient here is Cordyceps sinensis (mycelium), which contains at least 8 percent cordycepic acid (D-mannitol) and adenosine. Doctor’s Best says their supplement is standardized by High Performance Liquid Chromatography (HPLC) to ensure potency and consistency. Studies of Cordyceps using mice proved promising, with a notable increase in endurance and exercise quality. Cordyceps polysaccharides may improve immune system function, confer liver protection, and have antioxidant effects. The only advertised side effect is that Cordyceps has mild blood thinning properties, so you shouldn’t take it with anti coagulant medication or certain NSAIDs.

3) Is Ultra Cordyceps Right for You?

This is a supplement which is easy to understand because there’s only one active ingredient. Cordyceps sinensis is sometimes called the caterpillar fungus or Yartsa Gunbu. It’s considered a medicinal mushroom which has possibly been used for 2,000 years in traditional Chinese medicine. It isn’t actually a mushroom, taxonomically, but is often referred to a mushroom. There are reportedly more than 20 bioactive ingredients in Cordyceps sinensis, including adenosine, mannitol, peptides, and sterols. Ultra Cordyceps contains at least 8 percent cordycepic acid (D-mannitol) and adenosine.

It’s tough to pin down the exact benefits of Cordyceps sinensis. There are so many potential benefits and very few scientific studies on them. The best human study simply concluded that they didn’t see a significant improvement in the endurance of trained cyclists. This could be due to many reasons. A study using mice showed a notable increase in endurance and overall exercise quality. In folk medicine, the fungus Cordyceps has been used for: increasing energy, enhancing stamina, reducing fatigue, improving sexual performance, treating coughs and other respiratory problems, offering protection for kidneys and livers, regulating metabolism, and more.

5) What You Need to Know Before Taking Ultra Cordyceps

This is a very inexpensive supplement and each bottle will last you two months. You only need to take one capsule a day. There are subscription plans and the possibility of free shipping, depending on where you decide to buy Ultra Cordyceps. Doctor’s Best sells their products on a global scale. You can find their supplements through Amazon and Jet, along with the Vitamine Shoppe and many other retailers. You can buy from physical locations as well as online. Keep an eye out, because there’s another type of Ultra Cordyceps which also contains Ginkgo biloba and Artichoke leaf extract.

7) How to Take Ultra Cordyceps

Cordyceps sinensis (Ophiocordyceps sinensis) is a fungus which grows in the mountainous regions of India, Nepal, and Tibet. It germinates in caterpillars, usually the larvae for a species called “ghost moths.” The fungus is very popular in traditional Chinese and Tibetan medicine, and has been used for at least 700 years. It’s valuable – called “soft gold” by some – and might be able to treat a number of conditions. Cordyceps sinensis is classified as an endangered species in China. This is thought to be a combination of factors: climate change, over-harvesting, and over-exploitation. Its popularity has also increased in recent decades, sold as capsules and in drinks. Doctor’s Best says they cultivate their own Cordyceps, which is a more sustainable and environmentally conscious method than harvesting wild strains.

There are a lot of useful components to Cordyceps sinensis. Its anecdotal long term uses in traditional medicine are often praised, although many of the potential benefits have not been scientifically proven. Very few studies have rigorously looked into the fungus despite its way array of potential benefits, and long time use in traditional Chinese medicine. It is popular, even in modern times, so you may want to look into a supplement containing Cordyceps sinensis. Doctor’s Best has created a safe and inexpensive way to try out Cordyceps sinensis which may have terrific long term benefits. 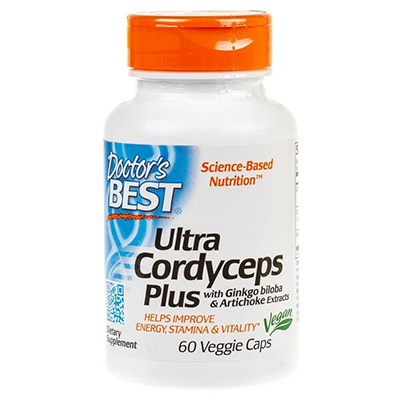 clear
Q:
What are the core ingredients in Ultra Cordyceps?
A:

Q:
Are Ultra Cordyceps benefits actually a reality?
A:

Most reviewers appear to enjoy the supplement. It reportedly helps with increasing energy and stamina while reducing anxiety. One person said that while this does work, real Cordyceps sinensis – harvested in the wild instead of grown in a laboratory – is a lot more effective. Few people seem to enjoy the taste or smell, so it might be best to take this supplement with food. Overall this could be an effective supplement with a lot of benefits. If you're interested in Cordyceps sinensis but want a sustainable and environmentally conscious supplement of it, Ultra Cordyceps by Doctor's Best might be the best solution.