DHEA is a dietary supplement designed to support feelings of energy andwell-being.The formula is manufactured by Ultimate Nutrition, a company founded in 1979 by Victor H. Rubino, one of the top amateur power lifters in the U.S. at that time. Since then, the company has developed products designed to improve sports and athletic performance through increased energy, strength and faster recovery. The product portfolio includes popular products such as pre and post workout amino-acids, protein powders, carbohydrate powders, and various types of fat burners such as Iso Mass Xtreme or Hyper Start.

People who wish to support their weight-training results or to be assisted with overall health and well-being may want to use this. The formula is not recommended to pregnant and nursing women. DHEA is recommended exclusively for people older than 35 years.

DHEA is a single ingredient formula.DHEA is a hormone naturally manufactured in the adrenal glands. The hormone is known for a wide spectrum of benefits on numerous body functions such as the immune system, mood andwell-being concentration capacity, muscle strength, sleep quality, energy level, ability to cope with stress and fat levels, however DHEA is advertised as extremely important to intense exercise and endurance training.

After DHEA is manufactured in the adrenal glands, it breaks down in the body into testosterone in men and estrogen in women. Although large scale studies on humans have not been conducted to determine its exact benefits, DHEA has been researched in over 1000 individual human and animal trials over the past 40 years.

A study conducted on 9 healthy men with an average age of 63 years old who received 50 mg of DHEA daily in an oral dose over a period of 20 weeks showed significantly enhanced immune function. In another study, participants, women and men aged between 40 and 70 years old, received a 50 mg daily dose for a six month period. The study concluded that more than 60% of the subjects claimed to have experienced increased perceived psychological and physical well-being, as well as improved sleep and mood.

A daily dosage is not clearly defined.

Presented as a single ingredient formula, DHEA should provide a positive impact on movement, energy boost, and circulation. Its core component is a hormone which is naturally produced by the body’s adrenal glands, but whose amounts start dropping after the age of forty. It was a relatively misjudged hormone whose effects haven’t been tested until recent times.

The DHEA manufactured by the organism breaks down into estrogen or testosterone, depending on the gender of its user. Even though there haven’t been any large-scale studies conducted on this component, there have been more than one thousand animal and human trials led in the past years. For instance, there was one who had nine healthy men with an average age of sixty-three as patients. They received fifty milligrams of DHEA on a daily basis, and after a period of twenty weeks, there was a noticeable improvement related to immunity. Furthermore, some individuals claimed psychological and physical increase as well as mood levels.

Despite the fact that the producer presents no side effects on its utilization, it warns people that suffer from cancerous conditions or prostate problems to avoid its usage. Furthermore, pregnant or nursing females, as well as adults under the age of thirty-five, should consult a specialized physician before following this treatment.

There are online customer testimonials about this supplement. What is being reported includes the following:

This dietary supplement can be found by bottles that feature one hundred capsules. However, the delivered dosage per capsule differs and may be 25, 50, or 100 mg. This is why it is suggested to consult a personal doctor to decide which dosage is better, depending on age, sex, health, and other potential medical issues. Overall, its price is viewed as affordable and can be found both on official manufacturer website and other online distributors. The daily suggested intake is one capsule with a meal, meaning that a bottle is sufficient for approximately three months of usage. However, after consulting a doctor, the intake may vary, and a bottle may last for more or less than this estimated time.

The manufacturer claims DHEA has no side effects, although reports of acne, hair loss, stomach upset and high blood pressure exist. Some women may even suffer changes in menstrual cycle, facial hair growth and a deeper voice when taking DHEA. The manufacturer recommends taking 1 capsule daily with a meal.

Based on the naturally produced hormone DHEA, DHEA is promoted to ensure support for physical energy (duringtrainingin particular), but also to promote general good mood andwell-being.

DHEA as a hormone however has many more benefits for the body, including for the immune system and for the quality of sleep. Still, many of its benefits have not been scientifically tested and a clear daily dosage has not been established. Consumer reviews seem to appreciate the formula as being effective and delivering on the benefit promises advertised by the manufacturer.

We may hence summarize and conclude that the product will work at least for some consumers. We recommend you carefully read the label and only after you talk to a professional decide if DHEA is right for you or not. 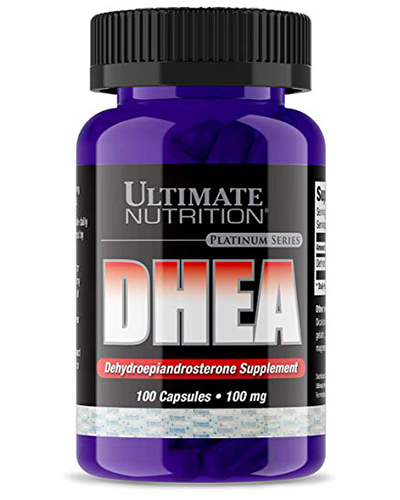 clear
Q:
What are the core ingredients in DHEA?
A:

DHEA represents a dietary supplement based on a single ingredient whose positive effects should be noticed on circulatory, muscular, and immune systems. It was designed by a well-known business on the nutritional area. This product is exclusively suggested for adults who are more than 35 years old and don't suffer from cancerous or prostate infections. It works in the organism due to balancing DHEA amounts that start to decline with age.

DHEA represents a dietary supplement whose effects rely on a single ingredient. Even though several years ago it was viewed as a "junk" hormone whose impact wasn't linked to any bodily functions, research pointed out that it influences movement, immunity, and circulation. This product is recommended for adults over thirty-five years of age because that is the period in which the amounts of its main component start to decrease in the organism. Even though the product hasn't been FDA tested, the customer testimonials point out towards its Effectiveness on both short- and long-term.

I’m a male over 40, that just had surgery eight weeks ago. This product seems to help with the transition. Although I can’t lift too much weight, I’m pretty confident in the future.

i use it to complete my training supplement,very good for anyone.