Glutathione is the most abundant antioxidant in the body and our first line of defense against free radical damage and infections.

The antioxidant also has other benefits including cognitive support, and it’s the cognitive-boosting aspect of glutathione the people behind Thorne Glutathione SR chose to capitalize on.

Glutathione SR is advertised as a revolutionary supplement that can support optimal levels of glutathione in the human body.

Maintaining optimal levels of glutathione appears to be critical for supporting cognitive function as we age. Aging tends to lower glutathione levels naturally, which can lead to increased oxidation and illness.

1) Thorne Glutathione SR at a Glance

2) The Company Behind Thorne Glutathione SR

Thorne Research, Inc. is the company behind Glutathione SR.

Thorne Research, Inc is a small business involved in the production of many different natural supplements, herbal remedies, and multivitamin products. They are located in Idaho, United States.

They have products for specific needs such as:

The single key ingredient in Glutathione SR is simply a reduced form of glutathione.

Glutathione is the most abundant antioxidant in the body. It removes toxins, reduces stress levels, and helps with long-term brain health.

Glutathione protects our cells by:

The reduced form Thorne used is to help it be absorbed faster, although we think the dose is too small for the claimed benefits, especially as recommended doses start from 250 mg.

However, the company claims that due to the sustained-release properties of the formula, their glutathione is protected from stomach acids and helps maintain adequate glutathione levels in the blood.

Glutathione supplementation isn’t new. In fact, many wellness supplements use glutathione for different functions including antioxidant protection, cell health and repair, skin and liver health, and some form of neurological conditions such as Parkinson’s disease.

However, we’re not sure if the dose can carry the load of all those claimed benefits. Most research papers use upwards of 250 mg while others recommend 500 mg per day to maintain circulation.

Judging from what we’ve seen, Glutathione SR may not be as potent as it claims.

5) Where to Buy Thorne Glutathione SR?

Thorne Glutathione SR can be purchased on their web store, Amazon, and other online retail stores.

7) How to Take Thorne Glutathione SR

Take 1 capsule two to three times daily or as recommended by your health professional.

Thorne Glutathione SR is backed by one of the most popular brands in the supplement industry and the science surrounding glutathione supplements is pretty much solid at this point.

The formula is transparent and makes use of a form of glutathione that offers high bioavailability. However, we think the dose per serving (1 capsule, 175 mg) is too small for the intended effects.

Users will have to follow the serving directions and go for at least two capsules per day to get the effects they see on the website. Unfortunately, this will cut the life-span of one bottle in half, making it a pricey purchase. 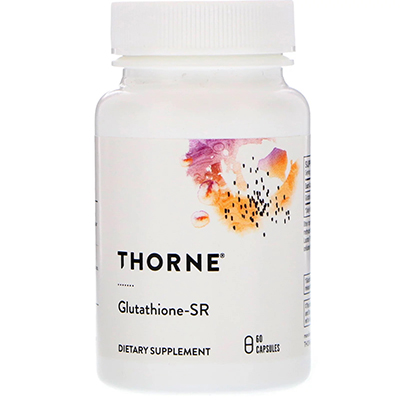 clear
Q:
What are the active ingrediens in Thorne Glutathione SR?
A:

Q:
What is Thorne Glutathione SR supplement?
A:

Q:
Where can I buy Thorne Glutathione SR?
A:

The product is available on their webstore, Amazon, and across various supplement retail stores online.

This depends on how old you are and how much you take.

A young and healthy adult may not feel the effects, but older adults could benefit more in taking this glutathione supplement.

Q:
How should I take Thorne Glutathione SR
A:

Take 1 capsule two to three times daily or as recommended by your health professional.

Q:
How do I contact Thorne Glutathione SR customer service?
A:

Glutathione-SR is sold by Thorne.

Really impressed with this one. It did wonders for my energy levels!