Seroprin-24 is a supplement targeted to individuals who get nervous tension or irritability from day to day tasks and it is designed to ease tension and elevate mood. This supplement is manufactured by Hi-Tech Pharmaceuticals, Inc., a corporation based in Norcross, Georgia, just north of Atlanta. The company was founded in 1994 and according to their website; the corporation is now an industry leader.

The company claims their products are developed and produced with intense support from pharmacologists and physicians but these statements don’t support the supplement’s efficacy as a mood enhancer. They also state that Seroprin-24 is the onlynutraceutical backed by scientific research available on the market.

We were unable to find any scientific studies to back up these claims, no customer testimonials (positive or not), no mention of side effects or dosage for Seroprin-24.

According to the manufacturer’s website, Seroprin-24 contains a “proprietary blend” into its formula. Usually, when such a formulation is used for a product, the company is trying to hide the fact the formula contains very little of the active ingredients listed on the bottle in an attempt to fool the possible consumers. Thus, individuals must be extremely careful when choosing such products and leave no room for errors in their demands of full disclosure of both active and inactive ingredients.

Seroprin-24 contains S-Adenosyl-L-Methionine, a biological compound discovered in 1952. The compound is usually labeled as SAM-E in the United States and it may be beneficial in treating depression as well as liver disease and osteoarthritis. However, the compound was commonly associated withunpleasantside effects such as insomnia, headaches and anxiety.

Seroprin-24 is a proprietary blend of amino acids, vitamins, minerals and herbal extracts. “Proprietary blend” is commonly used when a company wants to keep its “formula” secret. However, such formulations can only harm potential consumers. We believe that a consumer has the right to know what a product contains. Adverse reactions and possible side effects are always a risk. Not knowing the exact composition can only increase that risk.

Seroprin-24 contains S-Adenosyl-L-Methionine, a biological compound first introduced in 1952. This substance is commonly labeled as SAM-E in the United States, and it may be beneficial in treating depression, as well as osteoarthritis and liver disease. SAM-E was associated with several unwanted side effects, including anxiety, headaches, and insomnia.

This formula also includes GABA, an amino acid that is believed to ease anxiety, contribute to the natural relaxation that diminishes stress and to enhance the brain’s ability to focus, learn and remember.

Hi-Tech Pharmaceuticals claims to have worked with physicians and pharmacologists to develop this nutraceutical formula. While this is encouraging, we were unable to find scientific studies to back up these claims or positive customer testimonials for this brain supplement.

The overall price per capsule is what makes Seroprin-24 a good deal. Each bottle contains 90 capsules, which should be enough for one month of treatment at a maximum dosage of 3 capsules per day.

Seroprin-24 can be purchased from various online retailers. Some retailers may offer additional discounts and even free shipping for larger orders.

During our research we came across some vague and poorly written information that does not serve their retailers well. For instance, according to a website, the supplement “Help occasional simple nervous tension or irritability, as well as help nervousness due to common everyday overwork and fatigue” and “gently soothe away tension.” However, we believe that there are other more efficient products that can be as effective toward this end and far more cost efficient.

According to this supplement’s website, the product was truly researched and developed for the past decade. However, without any studies to support this statement, the company claims are nothing more than empty statements.

The ingredients listed by the manufacturer do suggest thatSeroprin-24 might act as a mood enhancer, although the side effects might discourage customers from risking trying this product.

Ultimately, the best choice for anyone that wishes to improve their mood and reduce irritability is consulting a medical professional that can guide you towards the treatment best-suited for you, be it natural supplements, prescription medication, or counseling. 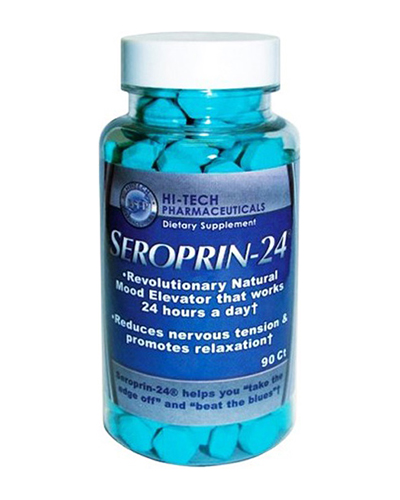 Seroprin-24 supplement combines a multitude of natural herbs that have the role to reduce stress and increase relaxation levels. The active ingredients of this nutraceutical act on the Norepinphrine, Serotonin, Dopamine and Acetylcholine levels in the brain. The result is a balance that makes Seroprin-24 treatment an effective natural mood elevator. Among the Seroprin-24 ingredients that decrease irritability and positively stimulate the brain are Gamma Amino Butyric Acid and S-Adenosyl-L-Methionine.

The manufacturer claims this product was truly researched and developed for the past decade, but the lack of testimonials, positive reviews and clinical researches on this formula are a bit concerning.

It is also true that many consumers have found success in using Valerian Extract, GABA or Hypericum Perforatum (St. John's Wort) to support and enhance their cognitive function. But getting the right formula isn't always a simple task. Each user is different, and he requires varying strengths of this blend.

I have used Seroprin-24, and I quite like it. It kicks in gradually, as you take it for maybe a day or two, and then you can really feel it. It helps my mood and helps with my anxiety, yet I can stay focused and awake, unlike when I was taking ridiculously large doses of things like zoloft and seroquel.

My mother (75 yrs old) has been taking saroprin for approximately 2 years. Recently she got sick (the flu) And got in a depression that made her want to sleep all day and night. I didn’t know she had depression (pryor to this) but found the pills among her stuff and asked my Aunt about them. After giving these to my mother she not only perked up but sat up in bed and requested food and asked about everyone as if she had not been out of it for a week. As far as I’m concerned these pills work very well. I however don’t like mystery drugs and will consult her primary about something else for her to take on a regular basis.

I just purchased a bottle of Seroprin-24 from a health store for about $30.00. Afer reading this, I guess I made a bad purchase. Seems like there is no proof it works and am afraid to even try it. Guess you live and learn.