Rosemary Antioxidant is advertised as a natural preservative that can be used in body care products and for culinary use. The company behind the product is Mountain Rose Herbs.

Mountain Rose Herbs is a wholesaler, retailer, and producer of herbal solutions and herbs (organic or wildly harvested) based in Vermont, in the United States. Its formulas are not distributed by many online retailers and do not benefit from plenty of customer satisfaction testimonials. Therefore, they might not enjoy an established reputation. Mountain Rose Herbs is a keen supporter of the environment thus it carefully selects its suppliers and it primarily sells certified organic products.

According to the manufacturer, Rosemary Antioxidant is based on certified organic rosemary extract and olive oil. It is a potent formula derived using CO2 extraction which should ensure that the phytochemicals found in rosemary have the same potency in the formulation as in their natural state. The antioxidant is intended to help people who are interested in making cosmetic formulas and herbal remedies on their own and without any synthetic additives, which can more often have side effects. The product may also be used as food preservative. According to Mountain Rose Herbs, rosemary is the main choice among natural preservatives for body care solutions and herbal formulations.

1) Rosemary Antioxidant at a Glance

The potency of Rosemary Antioxidant is derived from the antioxidative properties of the phenolic diterpenes compounds found in rosemary. Mountain Rose Herbs used the CO2 extraction technology in order to ensure the formula would be highly concentrated. Olive oil role makes the rosemary extract more soluble.

Rosemary is an aromatic herb native to the Mediterranean region. Rosemary extract is used in foods as a spice or preservative and in body care products. It has a high content of rosmarinic acid and other phenols which may prevent various oils from becoming rancid. Thus it can stabilize the shelf life of a wide variety of cosmetic formulations. Rosemary is generally used as a natural preservative in lip balms, scrubs, body lotions and creams. As it has a powerful smell, you should take that into account when preparing your own body care products.

Rosemary extract and natural preservatives in general do not cause adverse effects as often as parabens do (parabens are used in about 80% of cosmetic products). Rosemary may however be potentially harmful for pregnant women and women with above average menstrual flow. It may also trigger stomach upsets (rarely).

3) Does Rosemary Antioxidant Work and it is Safe?

Rosemary is used as an additive in foods and cosmetic products. It is a powerful antioxidant therefore it may be used to slow down the oxidation process of some cosmetic ingredients (various oils) and thus extend the shelf life of cosmetic products. Natural preservatives like rosemary extract may not be as potent but have less frequent side effects than synthetic preservatives like parabens, isothiazolinones, organic acids, halogen-organic actives, and urea derivatives. Parabens are the most widely used synthetic preservatives. Some people, however, experience skin irritations as an allergic reaction to them. Also, parabens may interfere with hormone production and might cause immune system and reproductive disorders in children. Rosemary also has some side effects but, they are rare if you use the herb correctly (vomiting, spasms, and miscarriage). Also, it may be better to stay away from rosemary if you have heavy menstrual flow or are pregnant.

Rosemary Antioxidant has not been evaluated by the Food and Drug Administration for safety and quality. The producer warns that Rosemary may increase menstrual flow if used excessively and should not be used while pregnant. However, pregnant women and women with heavy periods may consume foods containing rosemary in small amounts.

Mountain Rose Herbs does not say how much Rosemary Antioxidant you should use when preparing remedies and ointments (it only says it should be used in small amounts as it is concentrated). Instead, it advises that you should refer to your recipe.
We have not found online customer satisfaction reviews about Rosemary Antioxidant.

4) What Rosemary Antioxidant Does?

The product is sold in bottles of two, four, eight, and sixteen ounces. The price per ounce depends on the bottle size. The average cost for one ounce would recommend it as a moderately priced product. Shipping charges are also fairly high if you order directly from Mountain Rose Herbs. You can order online, by telephone, by fax, and by mail. Moreover, clients can pick up their order from the producer’s headquarters. Customers may return the product to and be refunded in full (within maximum sixty days from the invoice date), without any restocking charges. Nonetheless, they would pay the return shipping fees.

The number of online stores selling this product is quite limited.

7) How to Take Rosemary Antioxidant

The Food and Drug Administration has not checked the safety and quality of Rosemary Antioxidant. The producer recommends using it in small amounts because it is concentrated. In addition, it draws attention that rosemary is not safe for pregnant women and women with heavy periods, except when used in foods as a spice and in small amounts. Rosemary Antioxidant comes in bottles of 2, 4, 8 and 16 ounces and the quantity to be used depends on the required quantity required by your recipes.

8) Our Final Take On Rosemary Antioxidant

Rosemary Antioxidant can be used in cosmetic products or in foods as a natural preservative according to its producer. Rosemary is quite often used as a natural preservative and specialists have shown it is a potent antioxidant. This should back up the effectiveness of Rosemary Antioxidant. Since we have not found consumer testimonials on the Internet, we believe that either it may not be a popular product or that there are not many people willing or knowledgeable enough to make their own body care solutions.

The herb may be safer than artificial additives nonetheless it has some side effects of its own. Therefore, before using Rosemary Antioxidant, you should consult a healthcare practitioner if you are pregnant, have heavy menstrual bleeding, or suffer from a certain medical condition. 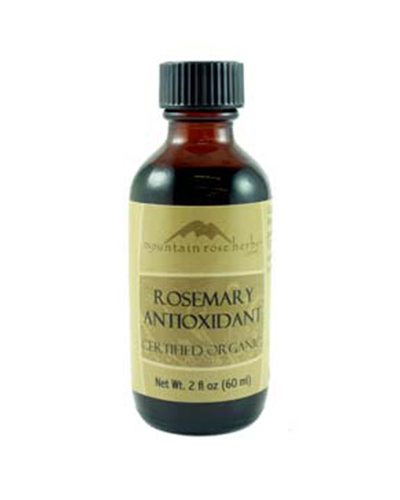 clear
Q:
What are the Rosemary Antioxidant ingredients?
A:

Q:
What is Rosemary Antioxidant?
A:

Rosemary Antioxidant is a certified organic preservative for cosmetic solutions and a variety of foods. It is produced by Mountain Rose Herbs. Its key ingredient is a traditional natural additive used in foods and has been shown by specialists to be a potent antioxidant that can be used in cosmetic products. Rosemary Antioxidant can be useful to people who make their own body care formulas and herbal remedies. The manufacturer warns that rosemary may be dangerous in large amounts if you have menorrhagia or are pregnant, though it is safe as a spice in foods.

Rosemary Antioxidant is promoted as a natural preservative to be used in hand made cosmetic products, food, and herbal remedies. Laboratory tests have shown that rosemary is a powerful anti-oxidant, therefore, it should extend the shelf life of products containing oils which become rancid over time. This shows that the formula may be effective.

We have not found online customer reviews, therefore, Rosemary Antioxidant may not be so popular. We believe one reason for us not finding testimonials is that there are not many people who have the time and necessary knowledge to prepare their herbal formulations.

However, we believe rosemary extract may be a safer preservative than synthetic ones like parabens.

I get skin rashes from parabens and so I try to use cosmetics that contain natural preservatives. The problem is that they are so hard to find. So I have just ordered Rosemary Antioxidant and am going to prepare a body solution based on sage with rosemary as preservative. Hope it works!

I have started a small business…making and selling homemade ointments. I have to say that I mostly use Rosemary Antioxidant for my ointments because it’s so convenient.