Doctor’s Best Real Krill Enhanced with DHA & EPA is advertised as a high potency source of Omega-3 essential fatty acids EPA and DHA. The formula manufactured by Doctor’s Best is claimed to be a science based dietary supplement designed to support healthy brain, joints, cardiovascular function and other organ functions.

Doctor’s Best products are claimed to contain high quality raw materials and to be developed using traditional knowledge and current scientific research in the field of therapeutic nutrition. The company was established in 1990, and currently manufactures and distributes more than 150 different products.

Doctor’s Best Real Krill Enhanced with DHA & EPA is recommended for the use of adults. People allergic to fish, and pregnant and nursing women are advised to consult a physician prior to using the formula.

Doctor’s Best Real Krill Enhanced with DHA & EPA is based on the therapeutic properties of the Omega-3 fatty acids EPA and DHA. The product is advertised to contain no milk, egg, wheat, gluten, corn, soy, sugar, sweeteners, starch, salt, or preservatives.Omega-3 EPA and DHA are found in foods such as fish, shelfish, flaxseed oil, krill oil, etc. They are not naturally produced by the body, hence a daily intake from diet or dietary supplementation is essential to normal body function.

EPA and DHA have been associated to numerous benefits on the cardiovascular function, cognitive function and fetal development. Their effects are based on their blood thinning properties and on the fact that they are powerful antioxidants.

Past and present research focuses on demonstrating positive effects of EPA and DHA in alleviating symtoms of ADHD, depression, dementia, and Alzheimer’s disease. EPA more than DHA seems to have an influence on mood and behaviour. Preliminary evidence indicates that a combination of EPA and DHA may prove effective in ailments such as major depressive disorder (MDD), bipolar disorder, schizophrenia and borderline personality disorder. DHA is essential to normal eye and brain function. It is not uncommon for it to be prescribed to pregnant women, helping the fetus’ brain develop normally. Patients with mild cognitive impairment, a condition wich affects memory but not other cognitive functions, tend to have low levels of EPA and DHA.

Because Omega-3 fatty acids have blood thinning properties, there is concern that it may interact with anticoagulant medication or harm people suffering from blood thinning conditions. Side effects are rare and include nausea, vomiting and headache.

Real Krill Enhanced with DHA & EPA contains EPA and DHA, two Omega-3 essential fatty acids. It also includes a powerful antioxidant called Astaxanthin, which belongs to the carotenoids group of substances. There is evidence that seems to indicate Astaxanthin may treat symptoms of Alzheimer’s disease, Parkinson’s disease, stroke and even some types of cancer. The additional research investigates its potential benefits as a remedy for tendon, joint and muscle pain, and arthritis.

The manufacturer recommends taking 2-4 soft gels of Real Krill Enhanced with DHA & EPA per day, depending on the purpose of the treatment. According to the manufacturer, the formula does not contain milk, wheat, gluten sugar, sweeteners, egg, corn, soy, or preservatives.

There are testimonials posted online about Real Krill Enhanced with DHA & EPA. What is being stated includes Costs a little more, but it is worth its price / It made my joint feel stiffer, I gave it up/ Made my mind very active, so I use it occasionally.

5) Precautions of Real Krill Enhanced with DHA & EPA Use

60 capsules of Real Krill Enhanced with DHA & EPA cost roughly $40. One bottle will last 15 days if a maximum daily dose is consumed (4 capsules) or 2 months if the minimum dose is consumed. The price of the product is slightly higher than for similar products. Usually, the online retailers offer certain price discounts or promotions that allow you to purchase the formula at a lower cost.

The formula is available from a variety of online or local retailers. A section of the official manufacturer website is dedicated to retailer identification, using the ZIP code.

The manufacturer recommends taking 2-4 soft gels per day, depending on the purpose of the treatment. Consumers report being satisfied with the formula, although not many reviews are available online. No side effects or precautions are mentioned.

Doctor’s Best Real Krill Enhanced with DHA & EPA uses a krill oil extract rich in Omega-3 fatty acids EPA and DHA. Each serving (2 capsules) features approximately 800 mg of combined EPA and DHA, a daily dose most healthcare providers agree upon. Omega-3 has been extensively researched and many of its benefits are backed up by scientific evidence. The formula has received positive consumer reviews, although not many in number. We may conclude that the formula is able to deliver on its claimed benefits. However, each patient is different and it is best that a customized treatment is approached for optimum results. 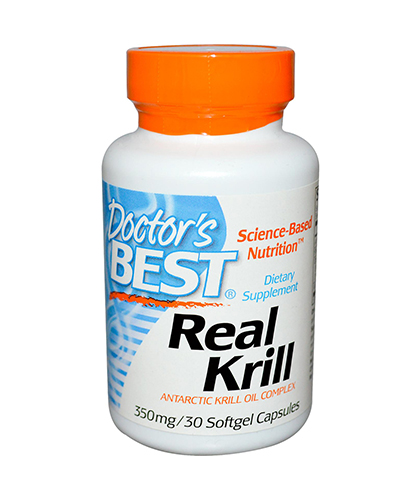 Q:
What is Real Krill Enhanced with DHA & EPA supplement?
A:

Doctor's Best Real Krill Enhanced with DHA & EPA is based on a combination of the Omega-3 fatty acids EPA and DHA and the antioxidant Astaxanthin. The formula is manufactured by Doctor's Best. Omega-3 EPA and DHA have been extensively researched and proven to have positive effects on a number of conditions including Alzheimer's disease, ADHD, major depression and cardiovascular disease. They are also effective in increasing joint mobility and relieving joint discomfort. Omega-3 has blood thinning properties, and so Doctor's Best Real Krill Enhanced with DHA & EPA should be cautiously used by people with blood thinning conditions.

Q:
Are Real Krill Enhanced with DHA & EPA benefits actually a reality?
A:

Real Krill Enhanced with DHA & EPA is based on a Krill oil extract which contains important Omega-3 fatty acids EPA and DHA. The formula also features a powerful antioxidant called Astaxanthin, making the formula a potent free radicals scavenger with numerous benefits on cognitive function, nervous system, cardiovascular health and joint and mobility health. There are few consumer testimonials that we could identify online. However, they report good results.

Given the several safety issues revolving around Omega-3 consumption, we firmly recommend that you consult a healthcare provider before deciding which treatment is right for you.

I was using another brand of Krill before switching to this one. Doctor’s Best actually worsened by knee stiffness and I had to go back to my old brand.

I’ve been taking this to prevent any unpleasant memory problems. I’m almost 60 years old, I am a very active person, have a lot of friends and I’d hate it if could not rely on my cognitive functions. I’ll definitely keep ordering Doctor’s Best Real Krill.