Quietude Restless Sleep targets individuals that experience a restless night’s sleep and insomnia on a regular basis. The supplement is manufactured by Boiron, a global pharmaceutical company with its headquarters in France. The company is well known world-wide for its homeopathic solutions.

According to the producing company, the mixture of ingredients used to develop this supplement can help people achieve a deep enough sleep that they can get the rest they need and enter the REM sleep phase. REM sleep phase is extremely difficult to achieve for those who are suffering from sleep disorders. According to experts, entering this phase of sleep can have multiplebeneficialimplications, both for mental and physical health.

The manufacturer mostly recommends this product for use on children and babies that are having difficulties sleeping. Sleep is an essential part of an infant’s growth, allowing the body to recover the necessary energy to support a healthy development. There are also reports according to which this product can be effective on adults as well.

Quietude Restless Sleep is advertised as a homeopathic herb blend remedy that is designed to induce a restful and peaceful night’s sleep. According to the producing company, this herbal mixture can eliminate the light sleep that makes individuals feeling more exhausted when they wake up, as well as helping them fall asleep without delay. While there are no concrete details on how this supplement works, supposedly it helps the body and the brain to relax.

Hyoscyamus niger (also known as Henbane) was commonly used by the Ancient Greeks, and in Europe and Asia during the Middle Ages in combination with Deadly Nightshade and Mandragora. While the plant is well known for its psychotropic properties, it can be toxic, even in small doses. Henbane is also associated with several side effects like dilated pupils, hallucinations, flushed skin and restlessness, and less commonly convulsions and vomiting.

Another ingredient used in Quietude’s formula is Nux moshata, a plant that affects the digestive track and dries the eyes, but can also have a soporific effect on the consumer. Nux moshata is commonly associated with the following side effects: the feeling of unpleasant intoxication, the feeling of vertigo, headaches and, less commonly emotional liability.

Taken individually, each ingredient may be useful in its own way and it may be a good herbal treatment for insomnia and other sleep disorders. However, there is no proof that the blend of ingredients leads to the same effects. We were unable to find any clinical studies to support the manufacture’s claims.

3) Does Quietude Restless Sleep Work and it is Safe?

As previously stated, Quietude Restless Sleep is a homeopathic herb blend remedy that is designed to induce a peaceful and restful night’s sleep. Passion Flower (also known as Passiflora or Passion Vines) appears to be the main ingredient in this formulation. The plant has a long history of use among Native Americans in North America. The fresh or dried leaves of Passion Flower have been used for centuries to make a tea that is used to treat insomnia, epilepsy, and hysteria. The same extract is also believed to have analgesic properties.

Passion Flower is well tolerated with side effects rarely occurring. It is recommended never to exceed the maximum concentration. The plant may be toxic in very high amounts.

There is little information available on Quietude and how the whole formula is supposed to work. While the Effectiveness of Passion Flower has been researched during numerous clinical studies, we cannot make the same statement for the overall formula behind this supplement.

Quietude Restless Sleep is an inexpensive product. Each package contains 60 tablets, which should be enough for one month of treatment at a recommended dosage of 2 tablets per day. For best results, Quietude should be taken in the evening and at bedtime. This product is sold by numerous online and offline retailers, as it is one of the most popular products of its type. Some retailers may offer additional discounts and even free shipping for larger purchases.

7) How to Take Quietude Restless Sleep

We advise caution when using Quietude Restless Sleep, particularly when administering it to children. If you experience any side effects, flushing of the skin or abnormal pupil dilation, you should consult a doctor as soon as possible.

A homeopathic solution is usually safer for a short term treatment for individuals experiencing trouble falling asleep. Being specifically targeted at children, this all-natural ingredient formulation should be preferred to synthetic drugs. However, due to the potentially detrimental effect that some of the ingredients might have, it is recommended you consult a doctor before beginning to take this product, or before administering it to a child.

Quietude Restless Sleep appears to be a good solution in treating mild insomnia and other sleep disorders, however it is not labeled for symptoms of mood disorders such as nervousness, inexpiable outbursts, emotional liability associated with menopause or PMS and mood swings. 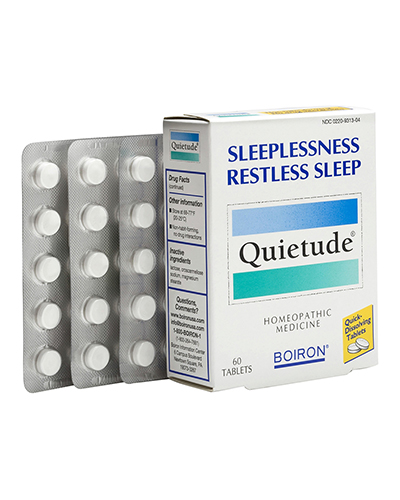 clear
Q:
What are the Quietude Restless Sleep ingredients?
A:

Q:
Quietude Restless Sleep is all about what?
A:

Quietude Restless Sleep is a sleeping formula that control symptoms such as irritability, insomnia or stress. The main plus of Quietude Restless Sleepe is that it is said to be a non-sedative drug, meaning that users don't have to deal with many side effects at the level of the brain. Among its ingredients are plants like Chamomilla Vulgaris, with beneficial effects when it comes to irritability, Hyoscyamus Niger, which deals with difficult concentration, and Passiflora Incarnata, which has a relaxing effect on the brain.

Q:
Are Quietude Restless Sleep benefits actually a reality?
A:

The company behind Quietude is enjoying a excellent reputation among its customers. However, the lack of information, relevant clinical studies and testimonials are a bit concerning.

Nevertheless, this formula appears to contain the right ingredients, and it may be effective in treating insomnia and other sleep-related problems. Many people have found Passion Flower to be effective in inducing a more peaceful and restful night sleep. However, it is important to note that each is different and so are his needs. Finding the right concentration, the right balance, may be a challenging task.

I didn’t expect this product to work. Within 15 minutes of taking I was fast asleep and for first time in months I slept through the night. I was amazed! No groggy feeling the next day either. It worked really well for me.

Title for your comment
Really Works
Have you tried this product?
Yes
Reply
Daphne Bastians

It is a MIRACLE after years of insomnia and waking up at least 3 times per night it has helped me sleep right through the night 2 out of the 3 times I have used it. Unfortunately I can only buy it over the internet, cost is reasonable but postage is extortionate.