Valerian Root is a natural supplement that, according to the manufacturer’s website, “works in harmony with your natural cycle to help promote relaxation, so you can leave your busy day behind and get the tranquil rest you deserve.”

This herbal remedy is produced by Puritan’s Pride, a long-established vitamin and herbal supplement company with its headquarters located in Long Island, New York.

The company produces and sells over 1,000 vitamins, herb, and nutritional supplements and minerals. They have been on the market for more than 50 years. They’re also the company behind Super Snooze.

Unfortunately, the company’s statements are not validated by any scientific studies or researches. However, the Valerian Root (the key ingredient in Valerian Root) is well known for its properties. Multiple studies have been conducted on this ingredient alone, proving its sedative and “hypnotic” properties.

With only two used ingredients (Valerian Root and Gelatin), the company sells Valerian Root in the form of a soft gel at a reasonably affordable price.

Valerian Root, the key ingredient used in this supplement, has been utilized in Europe as a sedative and “hypnotic agent”. Valerian works in harmony with your natural cycle to help promote relaxation.

AHPA (The American Herbal Products Association) gave Valerian a class I safety rating. This means that is should be a safe herb to use. However, some individuals have reported mild adverse reactions to Valerian during clinical tests: suddenly feel nervous, anxious, and restless and heart palpitations.

3) What Does Puritan’s Pride Valerian Root Do?

Valerian Root, just like the supplement’s name also suggests, contains Valerian root extract. This plant has been used since ancient Greece and Rome as a pain reliever, anticonvulsant, sedative and migraine treatment. Due to its tranquilizing properties, many scientists believe there is a connection between Valerian and the GABA neurotransmitter receptor system.

Numerous scientific studies have been conducted to prove the above statements. Unfortunately, the data we have is still inconclusive. Many independent studies are yet required to fully discover how this plant interacts with the human body’s elements.

Valerian root is one of the critical ingredients in insomnia and other sleep-related disorders treatments. Evidence suggests that Valerian poses a calming effect, but it doesn’t cause sleepiness the following day. Therefore, this plant is commonly used as an alternative to prescription medication.

Valerian is usually well tolerated with mild side effects rarely occurring. The most common side effects include stomach ache, apathy, a feeling of mental dullness, and mild depression.

There are very few online testimonials on this product. This is concerning, in particular, for a product that has been on the market for so long.

Compared with other similar products (Valerian root extracts), Valerian Root is an average-priced supplement. Each bottle contains 120 soft gels, which should be enough for up to 2 months of treatment for the average user.

Shipping by UPS (available only in the contiguous 48 states) is $4.95. All International shipments are charged postage costs calculated by weight and destination, plus a handling fee of $4.95.

The company offers various Valerian products: 450 mg capsules, a liquid extract, and 1000 mg softgel. According to their website, the 1000 mg softgel is the most popular product.

8) What Users Are Saying

Valerian Root may have some usefulness as a sleep facilitating herb. For some individuals, it has a somewhat calming, relaxing effect. According to some studies, it may prove to be useful for menstrual cramps, ulcers, and high blood pressure. However, the research conducted on this herb is far from conclusive.

A good night’s sleep is crucial to one’s overall health and a sense of happiness and well-being. The inability to sleep may indicate an imbalance, a mood, or an anxiety disorder.

Thus, while we support companies producing natural remedies and supplements, we also recommend products with a strong, researched background; that has been proved to be effective in the long term.

We also recommend supplements containing the natural mineral Lithium to relieve the symptoms of a mild to moderate disorder potentially. 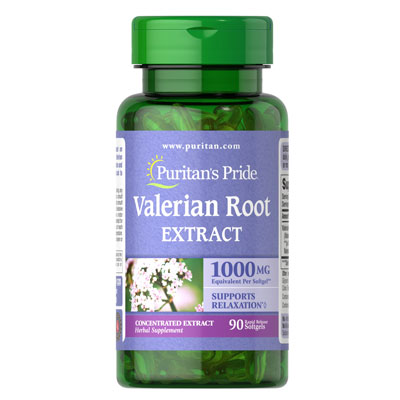 clear
Q:
What does Puritan's Pride Valerian Root contain?
A:

Q:
What is Puritan's Pride Valerian Root supplement?
A:

Valerian Root is one of the supplements recommended for sleep problems, nervousness, anxiety, and restlessness. The extract of Valerian root is known to enhance the mood naturally and to calm the individual.

However, Valerian Root users should be aware that side effects can also occur, such as heart palpitations or withdrawal symptoms. This is why it is essential to discuss with a doctor before taking Valerian Root when also taking anti-anxiety medications.

The lack of testimonials and positive reviews is a bit concerning, especially for a product that has been on the market for so long.

However, it is essential to note that many people have found Valerian root extract to promote relaxation, elevate mood, and promote a peaceful and restful night sleep.

It is also important to note that each is different and so are his needs. People require various concentrations of this extract to feel its effects.