Pterostilbene is a natural dietary compound found in blueberries, almonds, and grape plants. It may serve a number of purposes to keep your body healthy, including regulation of cholesterol levels and your weight. This is one of more than 200 supplements sold by Carlson Labs, founded more than fifty years ago in Chicago. They’re currently located in the Arlington Heights suburb to accommodate their expansion. This is a successful company who has attained that success from a strong focus on quality and purity of supplement products.

Pterostilbene is known as a component of blueberries and grapes (seed, leaf, vine). It’s produced by plants to defend against parasites and insects, and has antioxidant effects in humans. It’s occasionally considered part of why ingesting small but regular amounts of wine daily can be good for you.

2) Details on Pterostilbene Ingredients and Uses

3) What Does Pterostilbene Do?

Each capsule has one ingredient, 50 mg of pterostilbene, so it’s easy to see what you’re getting. Pterostilbene is a natural compound found in blueberries and a few other sources like almonds and grape vines. So far, research shows that it may have a wide variety of preventative and therapeutic benefits for your brain, heart, metabolism, and blood. It might help against cancer and other problems commonly faced by society.

Some people say it’s a better version of something called resveratrol. It’s a member of of the polyphenol group of plant compounds, which includes peanuts and berries, and is found in red wine. Resveratrol is sometimes considered an antioxidant something which protects the human body against increased risk of things like cancer and heart disease. It’s been used in research on anti-aging, Alzheimer’s disease, and diabetes. While it’s been linked to weight control and helping people age well, there isn’t a lot of research in general. Benefits and side effects are not confirmed. As such, there isn’t a recommended dose, although most supplements contain up to 500 mg of resveratrol. In animal studies the most common dose has been 2000 mg a day.

Pterostilbene is specifically said to be better than resveratrol because of how they compare in terms of absorption (via oral ingestion) and potency. Low doses of 10 mg a day seem to have a positive effect on cognition. In animal research, servings of 250 to 500 mg have been used to reduce cholesterol, obesity, and glucose. Like resveratrol, there’s insufficient evidence to really speak to the benefits of pterostilbene, and there aren’t any know side effects. Your needs will vary a very low or very high amount seems to work best. It’s especially effective when combined with doses of grape seed extract.

5) Precautions of Pterostilbene Use

Since each bottle lasts for about a month, this is reasonably priced. It’s easy to find online, at sites like Amazon, and your local stores may carry it as well. Carlson has a large distribution network and their products can be found all over the USA.

There aren’t a lot of human studies out because this is something that’s only recently caught the attention of most people. In animal studies pterostilbene serves different purposes. In some studies it may help anxiety and mood while improving cognition, but only in very small doses. In other studies it helps cholesterol, blood pressure, and metabolism. It may even be useful for diabetics and cancer patients. In general, pterostilbene is considered a useful and important antioxidant which can have anti-aging properties.

8) Our Verdict on Pterostilbene

Overall pterostilbene is considered a great addition to your daily diet. Blueberries and grapes are good for you as it is, and this might be a concentrated way to deliver many of their great effects in a simple capsule form. Carlson Labs says this product can give you the approximate equivalent of 2000 cups of fresh blueberries, which is quite a feat. Pterostilbene may improve your memory, regulate aging and metabolism, maintain cholesterol levels, and more. It seems to do a lot, although people are still looking into its effects and what it can do for you. 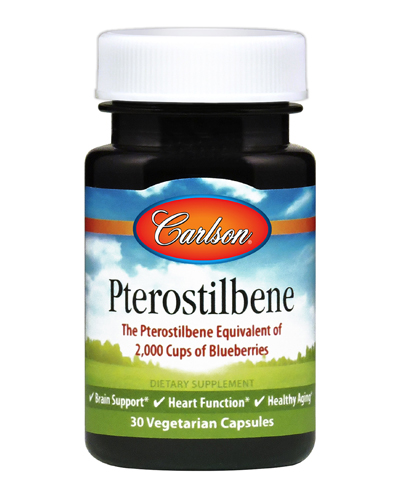 clear
Q:
What does Pterostilbene contain?
A:

Q:
Does Pterostilbene work?
A:

While studies are promising, and pterostilbene may have a lot of benefits, evidence is a little inconclusive. 50 mg per capsule may be a good amount, and Carlson Labs says it's equivalent to over a thousand cups of fresh blueberries. If you want to increase your intake of antioxidants, and test what may be the next big supplement ingredient, this is a product for you. It's inexpensive and may do terrific things. In older adults especially, it could help prevent age related cognitive decline.

Pterstilbene uses the same receptors as opoids if i am right and i think it put me into partial opoid withdrawal when i took it while in detox from methadone,the receptors have a greator affinity for PSBene than methadone so it started replacing methadone receptors with PSB and when the methadone blood level goes down as a result you may go into withdrawal,be carefull .