Picamilon is marketed as a novel dietary formulation designed to increase energy levels, improve sleep patterns, enhance cognitive function in terms of memory and focus, and promote healthy blood pressure, vision and auditory function. The company that created the formula is called Cognitive Nutrition, a self-proclaimed leading nootropic supplier at an international scale. It was founded in 2000 and is based in Chicago. Their line of products is marketed as processed in a cGMP compliant facility following FDA guidelines in terms of purity, safety and quality.

This supplement is advertised as approved in several countries (unspecified by the manufacturer) as a support for cognitive and emotional health. Its formula was discovered in 1969 and combines 2 different key ingredients: the neurotransmitter GABA and a form of vitamin B3 used to increase GABA’s benefit range and potency. This supplement is classified as a nootropic, also known as smart drug, a type of product believed to be particularly beneficial for the brain and its proper functioning.

Picamilon is marketed as being able to provide a more bio-available form of GABA, due to the presence of Niacin which is believed to act as a transporter for this substance through the blood brain barrier. Concerns regarding supplemental GABA actually reaching the brain (because it has a high molecular mass) have issued contradictions among researchers, some even advocating the inutility of such a dietary supplement for cognitive improvement.

Picamilon is based on the health benefits of GABA and Niacin.

GABA is a natural substance produced by the human brain to regulate the production of the Human Growth Hormone, and help the body to relax. The chemical is one of the main inhibitory neurotransmitters. Proper GABA levels are considered essential for the body to react normally to various stressful situations thus preventing a serious physiological imbalance. A shortage in this chemical has been often described as one of the main cause for conditions like, anxiety, depression, panic attacks, ADHD, insomnia, emotional distress, and even obesity. Researchers have identified two different types of receptors for this substance: GABAA and GABAB receptors. Most of the available drugs that focus on treating anxiety, depression or insomnia, are focused on activating the GABAA receptor. GABA b receptors have a different mechanism of activation and are believed to be responsible for the inhibitory properties of GABA
Niacin is a secondary active compound in Picamilon and acts as a delivery mechanism for the GABA. It ensures a faster delivery of the GABA neurotransmitter through the blood brain barrier.

Although not indicated, Picamilon side effects may result from those reported for the active substances: tingling effect, breathing difficulties, and increased heart rates. Safety of GABA supplements has not been evaluated until this moment, so people should take this fact into consideration before using such a product. Picamilon reviews tend to be positive, but some consumers have reported that the relaxation effect was too strong, affecting their ability to function normally.

Picamilon is an amino acid formulation that contains GABA, a naturally occurring amino acid manufactured in the brain that works as natural “brain tonic.” In simple terms, when the brain experiences an abundance of nervous tension and stress, it can be caused by a surplus of epinephrine and norepinephrine. To reduce this surplus, the brain will produce neurotransmitters, one of which is GABA.

Recent studies have revealed that GABA can relax and strengthen the nervous system. Decreased levels of gamma-aminobutyric acid in the brain can cause seizures, panic attacks, and neurological disorders. Furthermore, a GABA-based treatment may be useful in treating some diseases related to the brain and nervous system.

There are testimonials about Picamilon posted online. What is being reported includes the following:

5) Precautions of Picamilon Use

Picamilon is a relatively cheap supplement. Each bottle contains 60 capsules, which should be enough for two months of treatment for the average user.

This product can be purchased from various online and offline retailers. The shipping costs will vary based on your physical location.

The recommended dose is between 50-450 mg per day, according to individual needs (but most importantly following the doctor’s advice).

Picamilon is promoted as a novel over the counter supplement, although its discovery dates since the late 60’s. The product is advertised as based on clinical research that revealed improved delivery rates from classic GABA supplements, Vinpocentine, or Ginkgo Biloba supplements.

However, the combination between Niacin and GABA was not clinically proven to be more beneficial for the cognitive function. There are of course, several attempts of actually proving these claims, but evidence is not conclusive or sufficient. The formula should not be used by people under 18 years old, or by pregnant and breastfeeding women, because safety in these cases was not evaluated.

Although online testimonials seem to incline towards the effectiveness of this formula, consumers should not forget that taking dietary supplements without the consent of a specialized professional may result in potentially dangerous side effects. People already under medication or suffering from any condition should under no condition deviate from this recommendation. 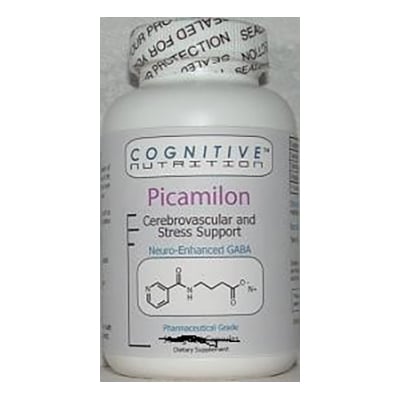 clear
Q:
What are the Picamilon ingredients?
A:

The product has received many positive reviews and appears to be high-rated on many specific websites.

All these may be appealing for those who are seeking an efficient treatment for stress, anxiety and other similar health problems. However, the information provided by the manufacturer is far from sufficient. They are missing many important factors. Therefore, we advise our readers to research further into the Effectiveness of this supplement before making a final decision.