Phosphatidyl Choline features a single core ingredient, the precursor of the essential brain neurotransmitter Acetylcholine. While the product label mentions no direct or indirect benefits, research involving Phosphatidyl Choline recommends it as an excellent cognitive function booster, with effects on memory, concentration, and overall intellectual abilities of users.

The supplement only features soy derived Phosphatidyl Choline, without including any preservatives, diluents, or artificial additives. The company behind the formula is called Allergy Research Group and was founded in 1979. The company’s product portfolio is rather large, and features high quality, hypoallergenic, and cutting-edge nutritional supplements.

Phosphatidyl Choline is designed for adults who wish to improve or achieve optimal cognitive function.

1) What is Phosphatidyl Choline?

Phosphatidyl Choline is a major component of almost all biological membranes and makes up a large part of the volume of brain cells. It is a source of Choline which is essential to normal brain function. It can also be obtained from a variety of sources such as egg yolk or soy beans.

In fact, Phosphatidyl Choline is a generic term used to designate a class of phospholipids that incorporate Choline as a significant ratio of their structure. Plus they are a member of the Lecithin group of fatty substances which occur in both animal and plant tissues. Sometimes Lecithin and Phosphatidyl Choline are used interchangeably although the two are different. The body uses this class of substances to make the neurotransmitter Acetylcholine, which is linked to memory and other cognitive processes. Scientific interest has been shown in relation to memory loss, Alzheimer’s disease, anxiety, or manic-depressive disorders. However, results from clinical research involving this class of substances are at the time of this review in conclusive.

Phosphatidyl Choline is the most abundant type of phospholipid in the body and is heavily concentrated in the liver as well. This is why it may benefit liver repair treatments, with regards to conditions including hepatitis A, hepatitis B, and hepatitis C.

2) What Are Phosphatidyl Choline Ingredients?

3) What Does Phosphatidyl Choline Do?

Phosphatidyl Choline contains phosphatidylcholine, a major component of biological membranes and can be easily obtained from a variety of readily available sources such as egg yolk or soy beans. The Effectiveness of this component has been under research for many years already. Unfortunately, while is a vital substance that can be found in every cell in the human body, the results we have so far are far from conclusive.

Phosphatidylcholine appears to have many potential benefits for liver repair. Another study shows promising results in what concerns phosphatidylcholine’s healing effect with hepatitis A, hepatitis B, and hepatitis C. This substance has also demonstrated effectiveness in improving the overall cognitive function memory capacity in dementia.

Phosphatidylcholine is a naturally occurring substance in the human body and using supplements based on this ingredient should not be associated with any serious side effects.

There are testimonials about Phosphatidyl Choline posted online. What is being reported includes:

5) What You Need to Know Before Taking Phosphatidyl Choline

6) How Much Does Phosphatidyl Choline Cost?

Use is generally side effects free, although oral administration may sometimes cause excessive sweating, stomach upset, and diarrhea. The formula should be used a dietary supplement. It is recommended that you take 1 to 4 softgels two or three times daily, preferably taken with meal.

Still, we advise our readers to further research the formula, since numerous other manufacturers offer supplements that feature the ingredient, alone or in combinations that may enhance even more the benefits of Phosphatidyl Choline. Talking to a healthcare provider would also be of great help in establishing the right treatment plan for your condition. 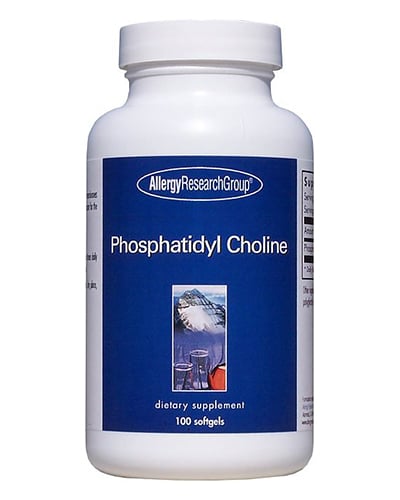 clear
Q:
What does Phosphatidyl Choline contain?
A:

Q:
What is Phosphatidyl Choline supplement?
A:

Phosphatidyl Choline is a dietary supplement specially created to support cognitive function. It contains Phosphatidylcholine extracted from soy, which helps synthetize acetylcholine, a substance that supports healthy brain function. Phosphatidyl Choline can be used as a treatment for memory loss, involuntary muscle movements and even Alzheimer's disease. The company behind this product is Allergy Research Group.

Phosphatidyl Choline has received many positive reviews and testimonials, many consumers reporting excellent results. There have been some complaints regarding the packaging, but it is important to note that this aspect doesn't necessarily incriminate the manufacturer (there are many retailers that are using their storage facilities).

Phosphatidyl Choline may be effective in treating the above health problems. We advise our readers to research further into this formula. If you want to purchase this product, you can either do that directly from the manufacturer or seek a trustworthy retailer.

Helps protect your liver Lyme disease is very hard on your organs which have to filter and remove an inordinate amount of toxins. Lecithin helps to protect your liver. I take a heaping teaspoon every morning in my green drink. It is very cheap and delivers good bang for the buck.

Very happy with my purchase. Ordered product after recommendation from my naturopathic doctor. Very satisfied with quality of product