Organically Bound Minerals represents a dietary supplement promoted for featuring a blend with a reliable proportion of minerals that come from a combination between alfalfa and kelp.

From a general perspective, it encourages the health of connective tissues and a proper enzyme function while also offering antioxidants, thus targeting the cognitive functions and not only the skeletal system.

The business that designed this remedy and distributed it to the public in 1935 is named Standard Process. They were established in 1929 and created so far a series of products that vary from whole food supplements to veterinary formulas.

The founder of this company is called Dr. Royal Lee and based its principles on the idea that the source of a compound is more important than the amount used in each remedy.

Moreover, he claims that upon harvesting, plants are appropriately washed and then promptly processed, hence the nutritional integrity is preserved correctly.

Standard Process has created a sheet for each of their remedies. They detail the provenience of their ingredients and other specifications linked to its usage or potential counteractions or side-effects.

Discovered by the Arabs, alfalfa means in Arabic “father of all foods,” and the plant that has this name is thought to have been given both their racing horses and themselves strength and endurance.

One of the remedies whose positive effects are based on alfalfa is represented by Organically Bound Minerals, which is provided by Standard Process.

Over the years, research showed that alfalfa possesses the ability to provide dynamic nutrition due to its sprouts that carry six important minerals for people’s health.

These are phosphorus, calcium, magnesium, potassium, zinc, and iron. Also, the quantity of minerals contained is proportional because sprouts are whole foods.

Thus they’re easier absorbable by the body. Although these minerals are alkaline, they have a neutralizing effect upon the gastrointestinal tract. Furthermore, alfalfa is thought to also offer vitamins like K, P, A, and folic acid.

Moreover, alfalfa is a source of chlorophyll, the most known plant chemical. It enhances the health of intestinal flora and also has other benefits.

Released on the nutritional market in 1935, Organically Bound Minerals is often viewed as a moderate priced product.

It comes in bottles containing 90 capsules. One bottle is sufficient for approximately three months of treatment. Although it can be purchased directly from the manufacturer website, people from outside America should seek it on other local or online suppliers because they have no international shipment policy.

When bought in more significant amounts, there are usually discounts and promotions offered by suppliers to satisfy their regular customers. However, there are no free samples provided by any of the suppliers, so people should be decided when purchasing this supplement.

However, the administration of alfalfa-based remedies, although viewed as possibly safe on short-term usage, is, in fact, likely unsafe in the long-term.

There can be some unwanted side-effects and reactions that are similar to an autoimmune disease named lupus erythematosus.

Advertised as a remedy containing a proportional and natural blend of minerals from alfalfa and kelp, Organically Bound Minerals supposedly encourages the health of enzymes and also enhances connective tissues while helping with energy production at a cellular level.

Featured iodine should assist in healthy thyroid function. It is suggested that people who seek an improvement in their cognitive and skeletal system.

Standard Process doesn’t state anything about potential side-effects. However, there may be some that appear. If so, it is advised to stop the treatment immediately.

A robust positive feature of this dietary supplement is its experience in the nutritional field, with over seventy years of utilization among consumers and no bad online feedback. 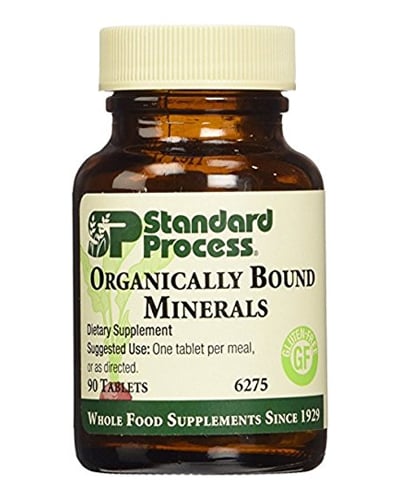 clear
Q:
What are the active ingrediens in Organically Bound Minerals?
A:

Q:
What is Organically Bound Minerals supplement?
A:

Organically Bound Minerals represents a dietary supplement formulated by Standard Process in 1935 that should enhance the health of enzymes and connective tissues, thus helping the energy production at a cellular level.

It focuses on two of the bodily systems, cognitive and skeletal. The product features alfalfa and kelp in combination with iodine. Thus it should provide the body with essential minerals and vitamins that should contribute to the overall well-being.

Q:
Are Organically Bound Minerals benefits actually a reality?
A:

Promoted as a product featuring a natural and proportional blend of minerals from kelp and alfalfa, Organically Bound Minerals should encourage the health of enzymes while enhancing connective tissues and helping with cellular energy production.

Contained iodine supposedly assists with normal thyroid function. It is recommended for people who desire an improvement in their skeletal and cognitive systems.

Even though the manufacturer doesn't state anything about the potential side effects of this treatment, due to its composed ingredient, there may be some that occur. If so, it is recommended to stop the usage immediately.

A robust positive feature of this supplement is its experience in the nutritional market. It has more than seventy years of usage among customers and few to no online complaints so far.

Some people have commented on the price of this supplement, but if it helps with all these things, I think it is well worth the money. I havent been taking it very long but it has already helped with one issue I have been struggling with for quite a while which is dry mouth. A week after I started it it is markedly better!! Anxious to see how it is for bone health. Lots of good reasons for taking this!!

Among other things, Org Bound Mins help me sleep at night

My holistic vet recommended these for my dog. Despite regular chiropractic adjustments and acupressure, she continued to have muscle spasms in her back. Once we began using this supplement, the spasms disappeared! They return if I forget a dose

I agree great but WAY to expensive! Health care and healing shouldn’t cost a fortune!