Ginkgo Biloba Extract is marketed as an herbal food supplement based on a standardized extract of Ginkgo Biloba and designed to improves brain function, memory and concentration and to promote optimal blood circulation to the brain. Additional benefits which derive from Ginkgo Biloba’s main properties include proper brain oxygenation, blood vessels protection, and support for the blood flow at the extremities.

Ginkgo Biloba Extractis manufactured by Nature’s Sunshine, a US based company established in the 1970’s. The company products are sold in more than 30 countries worldwide through a network of roughly 600,000 distributors.

According to the manufacturer, each tablet is specially-processed and designed to slowly releases its contents providing continual benefits throughout the day. However, no evidence is brought to support this claim.Ginkgo Biloba Extract is recommended for adults who desire to prevent age-related impairment or who wish to stay mentally sharp. Pregnant women and lactating women are advised to talk to their healthcare professional prior to use.

1) What is Ginkgo Biloba Extract?

Ginkgo Biloba is one of the best selling herbal supplements by Nature’s Sunshine, but has been used by Chinese medicine practitioners for more than 3000 years. It is best known for its blood circulation enhancement properties, from which a number of related benefits derive. Particularly, by enhance both cerebral (brain) and peripheral (limbs) circulation, Ginkgo is used as a powerful cognitive enhancement formula (memory, concentration) as well as a way to prevent age-related cognitive decline that results from poor circulation. Improving brain circulation means better oxygenation therefore increased mental clarity and alertness.

There are even studies that attempted to prove that Ginkgo Biloba may improve neuro-degenerative disorders such as dementia or Alzheimer’s, however results are still controversial.

Ginkgo is generally safe but has been reported to cause stomach upset, nausea, dizziness, diarrhea or headache. Also, as a precaution, you should know that it may decrease the ability of the blood to clot and to interfere with diabetes and seizures.

Nature’s Sunshine is also the company behind the anti-anxiety formula AnxiousLess.

Nature’s Sunshine Ginkgo Biloba is advertised as a time release dietary supplement which has been based on a 120 mg Ginkgo Biloba extract, standardized at 24% flavonycosides and 8% terpene lactones. Evidence has shown that Ginkgo Biloba is one of the best-selling worldwide natural supplements. Chinese practitioners have traditionally used it by more than three thousand years. One of its best-known properties is the positive effect it has upon circulation enhancement. Because it improves both peripheral as well as brain circulation, this plant has been utilized in various cognitive enhancement formulas. Its main functions are: preventing age-related memory decline, enhancement of blood flow and better oxygenation towards the brain.

Some studies attest that Ginkgo Biloba may improve disorders that are neuro-degenerative, like Alzheimer’s or dementia. Even though it has generally been considered as safe, there are some reported side-effects related to its usages, such as headaches, dizziness, nausea and diarrhea.

Suggested daily usage is one tablet per day, taken with water in the morning. The manufacturers mention no side-effect, but it’s impossible to attest its general efficacy because there are no online available customer testimonials.

Nature’s Sunshine Ginkgo Biloba is sold by bottles that contain one hundred tablets. People may purchase this product either from online or offline retailers or manufacturer’s website. When the remedy is bought in larger quantities, promotions and discounts are offered.

The recommended dose of Ginkgo Biloba Extract is 1 tablet daily, taken in the morning. No side effects are mentioned by the manufacturer, however it is impossible to conclude on the formula’s effectiveness and potential side effects since there are no consumer testimonials that we could identify.

Ginkgo Biloba Extract is a dietary supplement based on a Ginkgo Biloba standardized extract. As numerous other similar products, this one also promotes cognitive performance and circulatory system health. Little differentiation exists from these other similar products. One of the differentiation points is that the tablets are designed to slowly disintegrate in order to release active substances all day long. However, no scientific proof of this claim is however brought by the manufacturer.

Additionally, the product is not reviewed by consumers; therefore a conclusion regarding its effectiveness and potential side effects cannot be formulated at this time. Hence, we recommend you seek specialized advice before using the formula however. 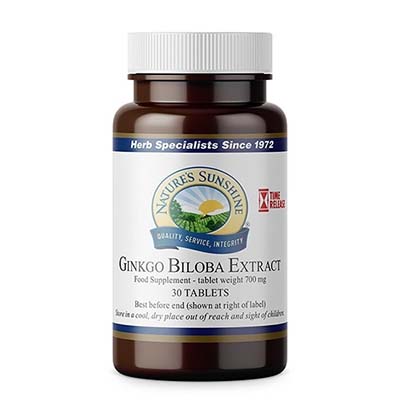 clear
Q:
What are the core ingredients in Ginkgo Biloba Extract?
A:

Q:
What is Ginkgo Biloba Extract?
A:

Nature's Sunshine Ginkgo Biloba is advertised as a natural supplement which has been based on a standardized Ginkgo Biloba extract. Like any other similar supplements, this remedy promotes both circulatory as well as cognitive performances. However, there aren't any major differences in comparison with similar supplements. A differentiation point is the fact that the tablets have been designed to disintegrate slowly to release the active substances throughout the day. No research supports this fact.

Because there are no related customer testimonials, its effectiveness cannot generally be stated.

I’ve been only using this supplement for a month and it started to have a positive effect.