American Ginseng is a liquid dietary formula based on an organic alcohol extract obtained from American Ginseng. The formula manufactured by Nature’s Answer is claimed to promote vitality. Numerous published researches as well as traditional use of American Ginseng support this benefit, but also reference numerous other medical uses.

Nature’s Answer is a manufacturer of liquid herbal supplements and a pioneer producer of alcohol-free herbal extracts. The company claims it combines innovative techniques, high quality ingredients and phyto-pharmaceutical manufacturing to deliver natural, quality products for the needs of the entire family. Nature’s Answer was founded approximately 40 years ago and operates an FDA registered manufacturing facility.

American Ginseng is designed for the use of adults who seek a boost in mental and physical energy. Pregnant and nursing women are advised against using the formula.

1) American Ginseng at a Glance

American Ginseng is a liquid herbal extract. American Ginseng is one of the two types of Ginseng known. It has been traditionally used and is considered to be effective in reducing fatigue, both mental and physical, as well as in alleviating symptoms of stress.

The plant is known to be a powerful adaptogen, hence its ability to assist the body’s response to all kinds of stress (physical, mental, environmental, etc). Roots of American Ginseng and ginseng in general must be at least four years old to be beneficial.

In addition to its stress reducing benefits, a combination of American Ginseng and Ginkgo Biloba has been scientifically shown to improve symptoms of ADHD in children aged 3 to 17 years, symptoms including anxiety, impulsiveness, and hyperactivity. Other potential benefits include fibromyalgia, anemia, insomnia, gastritis, fever and impotence.

Also, there are studies which reached the conclusion that American Ginseng improves working memory and may have some positive effects on verbal declarative memory and attention.

Nature’s Answer American Ginseng reviewed here is a liquid extract. The product can also be found in the form of vegetarian capsules. A 1-ounce flacon contains roughly 15 servings and costs approximately $23. A month’s supply may cost as much as $46, which is a rather high price compared to similar products available from other manufacturers. The formula is covered by a 30-day money back guarantee provided it is acquired directly from the manufacturer. The high-dose volume as compared to the size of the bottle obliges to purchasing many bottles at one time for extended use. The formula can be purchased from numerous retailers (online and offline), including from the manufacturer.

6) How to Use American Ginseng

American Ginseng has received a small number of consumer reviews, irrelevant for a fair evaluation of the formula’s effectiveness. The suggested dose is 12 ml (approximately 2856 drops) 3 times a day in a small amount of water.

Ginseng, both American and Panax Red Ginseng, have been touted for numerous health benefits, many of which tested through scientific research studies and clinical trials. American Ginseng is an herbal extract of American Ginseng designed to provide vitality. The formula’s effectiveness is not supported by any evidence, nor are there consumer testimonials available to help us reach a conclusion. American Ginseng is generally safe however and the formula is covered by an unconditional guarantee, which may encourage trial. Still, this formula is an herbal medicine which should be discussed with an herbalist, naturopath or other specialist before use. 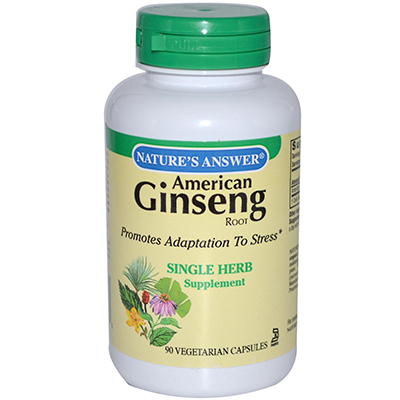 clear
Q:
What are the American Ginseng ingredients?
A:

Q:
What is American Ginseng?
A:

American Ginseng is an organic alcohol liquid formulation based on an herbal extract of American Ginseng. The formula manufactured by Nature's Answers is claimed to help promote vitality. American Ginseng is known as a potent adaptogen; hence it supports the body's natural response to stress. Additionally, it has been shown to relief fatigue, both mental and physical, treat insomnia, depression symptoms, ADHD, support memory, concentration and alertness and other benefits. American Ginseng should not be used by pregnant and nursing women.

Herbal Medicine, a component of alternative medicine, has gained increasing popularity as compared to traditional medicinal practices, due to the limited side effects associated, affordable prices and often increased Effectiveness. Nature’s Answer American Ginseng contains an extract of a very potent herb, the American Ginseng, which has been targeted by numerous research studies and many of its benefits are supported to various extents by scientific evidence. This formula, however, has not been subjected to any research. Also, consumer reviews seem to lack, making it difficult to assess its efficacy. This is why we recommend that a healthcare provider’s opinion is sought before starting any treatment.

I’m prone to nose bleeds and this has caused me some unpleasant episodes, so I had to stop taking it before noticing any benefits.