Max Clarity Review – Is it Effective?

Max Clarity is a dietary supplement and nootropic that is supposed to be beneficial for mental clarity, memory, and focus. It’s distributed by Arizona company Maxx Labs. According to them, this is a once daily supplement formulated to support mental sharpness. It has a fast acting formula that’s helpful for concentration, or so they say. Their formula is simple, without fillers or additives, and it’s relatively easy to see which ingredients are featured. The nutrition facts label is poorly formatted, but each part of the formula is still listed in a way that can be read by most people, including older adults.

Each bottle of 60 capsules contains a proprietary formula of 6 active ingredients. This includes ginkgo biloba, vinpocetine, and St. John’s Wort. Most servings of ginkgo are 100 mg daily, although it’s recommended that you use smaller amounts when your body is new to it. Your dose should be increased gradually until it arrives at a level where it can be most effective. Unfortunately Maxx Labs doesn’t list how much is in Max Clarity, so the potency of the ginkgo is unknown. Most people say it appears to be an adequate amount, though.

2) What Are Max Clarity Ingredients?

3) Is Max Clarity Right for You?

The proprietary formula only includes 6 ingredients, including bacopa monnieri, alpha-GPC, and phosphatidylserine. This is the exact opposite of other focus formulas like Focus Fast.

Each of Max Clarity’s vegetarian friendly capsule adds up to 502 mg of the blend. Alpha-GPC (L-Alpha glycerylphosphorylcholine) is a natural compound found in the brain and some plants. In Europe it’s used as a prescription medicine for Alzheimer’s disease. Bacopa monnieri, also known as brahmi, was once a common ingredient in traditional Indian medicine. Its uses included longevity, enhancing memory, and reducing anxiety. Modern science believes it’s an antioxidant which can help your nervous system communicate more quickly. Bacopa is an ingredient best absorbed with food, which is likely why Max Clarity recommends that you take its capsules with meals.

Although Maxx Labs doesn’t list the source of their phosphatidyl, phosphatidylserine is usually made from cabbage or soy. It can be made from other ingredients but it’s often safe to assume supplements use one of those two. Max Clarity doesn’t have an allergen warning for soy on the label, so they must not use soy. Phosphatidylserine performs the same role as bacopa monnieri in nootropics it promotes cellular communication in the brain and may have an antioxidant effect. It can boost cognition, improve memory, and might have a small effect on anti aging.

5) Precautions of Max Clarity Use

The price is definitely on the low end. It’s still relatively inexpensive even if you take more than the recommended dose, but Maxx Labs cautions against that. They have a 100% money back guarantee that lasts for an entire year after your purchase, which is one of the best guarantees offered by any company. You can find discount coupons for their club members, and all products have free shipping with the United States. Max Clarity has a high level of affordability.

Vinpocetine is a semi synthetic compound and derived from the periwinkle plant Vinca minor. In many cases it’s a combination of natural and man made portions, although some supplement manufacturers extract it from seeds. There isn’t any information on Max Clarity’s label to show the source of vinpocetine. In clinical research it has been administered intravenously as a means of treating seizure and stroke. It can increase blood flow in the brain and might ward against certain kinds of injuries.

The vast majority of people who take Max Clarity seem to enjoy it, and they report that it works as advertised. It doesn’t work for 100 percent of people who take it, but that’s common for most supplements. Differences in biochemistry can mean that one person experiences a mental boost, while another person may become fatigued and get a headache. Overall Max Clarity is a typical nootropic supplement which has the potential to help many people with their focus, memory, and concentration. It has the added advantage of being less expensive than many similar products. 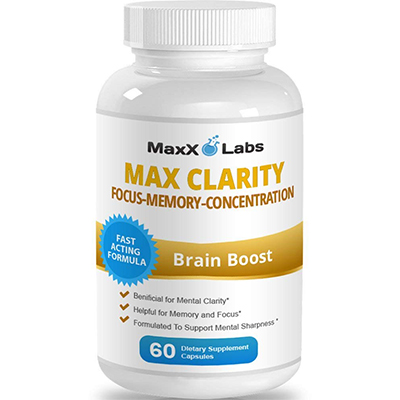 Max Clarity has hundreds of positive reviews and testimonials speaking to its success. Some reviewers spoke about the fast acting qualities of the supplement. While some supplements take weeks before you can really feel the effects, apparently with Max Clarity it takes less than a week. Improved mood, memory, and mental clarity were some of the results which people had the most. A few people said it took longer than anticipated to feel improvements. Fewer still said they encountered side effects like nausea and headaches. For most people this seems like a solid product with good results.