Alpha GPC is a cholinergic and nootropic which is supposed to support neuronal health and your ability to learn. Bottles of 60 capsules are sold by Jarrow Formulas, a successful supplement company created in 1977. They encourage scientific study, both within the company and in outside establishments. Jarrow says they have strong relationships with researchers and academic institutions, sometimes funding new studies on the potential of new ingredients for dietary supplements.

Each capsule contains 300 mg of Alpha GPC (L-alpha glycerylphosphorylcholine, also known as choline alfoscerate). Alpha-GPC is a natural compound found in the brain and some foods, thought to be an essential nutrient by some. It’s used to promote healthy cognitive function and increase athletic performance (this is still undergoing human study and may be similarly effective as arginine). It might also support cellular membranes, and aid in preventing mental decline. Studies show that Alpha GPC has a notable effect on cognitive decline and symptoms of Alzheimer’s. It can increase power output and growth hormone among athletes as well; a pilot study found Alpha GPC increasing power by 14%, which would be more effective than a typical daily dose of caffeine.

Alpha-GPC is a popular ingredient in nootropic blends like Alpha Brain and NooCube. It can also be purchased as a standalone supplement, such as the subject of our review, Alpha GPC.

3) Is Alpha GPC Right for You?

The vegan friendly capsules all have 300 mg of Alpha GPC (L-alpha glycerylphosphorylcholine, also known as choline alfoscerate). This is a natural choline compound found in the brain and it’s better understood than some newer supplements like uridine. Alpha GPC delivers choline to the brain through the blood brain barrier and has potential in treating things like stroke and dementia. In Europe, Alpha GPC is used in some prescription medicines for Alzheimer’s disease. It’s also found in foods that are high in choline, but there’s some evidence to show that Alpha GPC may be superior to many other forms of choline. It’s also thought to be more pharmacologically active at higher doses. It is different though, and shouldn’t be confused with general choline.

Taking it with food is recommended but not necessary. Storage is the single biggest issue with Alpha GPC. It degrades quickly, especially when you take it every day. Vacuum sealed bags or freezing your Alpha GPC is recommended, especially if you won’t use the entire bottle within a month. Minimizing the amount of air you expose Alpha GPC to is essential to keeping it for any extended period of time. If you think you’ll take two months to consume everything, store half of the bottle in a separate container (or sealable bag) and put it in your freezer; remove when the other half of your Alpha GPC is gone.

5) What You Need to Know Before Taking Alpha GPC

6) How Much Does Alpha GPC Cost?

The label says to take 1 to 2 capsules a day with food, and bottles have 60 capsules inside. This leads to bottles lasting around 1 to 2 months, depending on how often you take each capsule. If you take 1 capsule a day then this is an average priced supplement. Taking 2 day is a little expensive, but still in the average range, especially if you end up paying a price that’s near MSRP.

7) How to Take Alpha GPC

It’s thought to increase levels of acetylcholine in the brain. The standard dose is 300 to 600 mg, although some people will want to take up 1200 mg. If you’re not sure how much to take, asking your doctor is generally the best course of action to take. An appropriate dose will vary depending on your age, health, and general mental condition. Side effects are rare but can include heartburn, headache, dizziness, lethargy, and confusion.

When you take Alpha GPC for memory and mood, most people seem to have good results. Since no two people have the same biochemistry, your results may vary. For some people this is amazing, and for some people it’s just okay. It’s also supposed to be a non stimulant, and some people feel increased cognitive stimulation after taking Alpha GPC. In general it looks as though this is a solid product that a lot of people could use for various benefits. It might be especially effective in adults over the age of 50, as they’re most at risk for cognitive decline and Alzheimer’s disease – things Alpha GPC could treat. 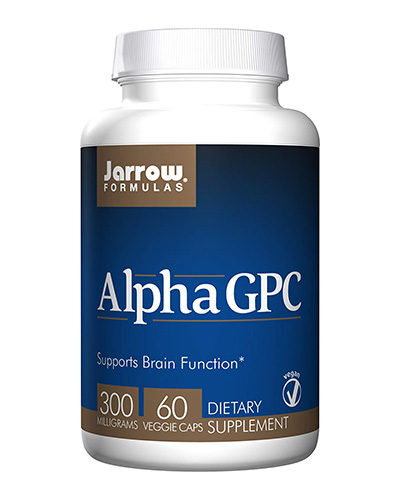 clear
Q:
What are the active ingredients in Alpha GPC?
A:

Almost everyone who takes Alpha GPC has something positive to say about it. Very few reviews online, if you look, are negative. Most people seem to take this for memory and mood. The mood stabilization has the additional effect of reducing insomnia for some. One person reported extreme lethargy and sleepiness after taking this, so if this happens to you, discontinue use of Alpha GPC immediately. As is common with many dietary supplements, people who enjoy the product talk about different levels of effectiveness. Regardless of your current status this seems like a good pick-up that can do a lot to improve your mental health. It might get expensive if you need a high dose, but it could be essential for you.