Linum B6 Review – 7 Facts to Consider

Linum B6 is promoted as a dietary supplement that has been particularly created to support formation of eicosanoids while also improving the quality of the skin as well as some processes of the nervous system. It was released on the nutritional market in 1962 by a business called Standard Process.

This company was founded by Dr. Royal Lee who is presently considered to be “Einstein of nutrition.” His supplementation-related philosophy is based on the fact that the source of the component is is of higher importance compared to the amount used. Due to this, he believes that even small quantities of whole foods may supplement the organism with needed so a major change in the organism can be determined.

In addition, Linum B6 was cold pressed, hence the extraction at low-temperature has maintained the nutritional properties of the contained flaxseed oil. Moreover, it was packaged inpearlsinstead of bunks, meaning that the remedy is protected against oxidation and integrity of the fresh and fragile oil is retained. On the other hand, none of the producer claims were evaluated by the FDA, thus further studying is needed in order to determine their truthfulness.

Additionally, this supplement supports hormone production and nerve tissues, thus it is suggested for people that have poor diets or with stressful jobs.

Promoted as an efficient hormone and nerve system support, Linum B6 was released on the nutritional market in 1962. It contains two components with known individual properties. These are Flaxseed Oil and Vitamin B6.

Flaxseed oil represents the primary health-giving compound found in the flax plant named Linum usitatissimum which has been utilized for its beneficial effects since 5000 B.C. The Greek used it for its healing qualities and there are some ancient Hippocrates writing that point out its benefits. Moreover, in eighty century France, Charlemagne introduced law in which people had to consume its seeds to maintain their bodies healthy.

Even the leader of Indian nationalism, Mahatma Gandhi stated that: “Whenever flaxseeds become a regular food item among the people, there will be better health.” Even though, the historical nutritional importance was made clear, but in order to understand its effects, we have to comprehend how it works.

Featuring alpha-linoleic acid which is further converted by the body in DHA and EPA, flaxseed oil provides improvement for the bodily functions while also enhancing the quality of the nails, receptor cells, eyes, brain tissues, nerves and hair. Some clinical studies suggest that EPA and DHA ma help maintain the immunity functions too. Because of this feature, people that have immunity issues or nervous system dysfunctions such ADHD, Alzheimer’s disease, or dementia may benefit from this remedy.

Even though it is viewed as likely safe when consumed on short periods, large dosages of more than 30 grams daily can lead to some diarrhea or allergic reactions.

Linum B6 contains the following ingredients: Vitamin B6 and Flaxseed Oil.

4) Precautions of Linum B6 Use

Linum B6 represents a moderate-priced product which can be bought by anyone who desires to follow this treatment either from manufacturer official web page or other online or local providers. It is distributed in bottles that contain 120 poles. Because the daily suggested intake is of one pearl per meal, a bottle can be enough for one month. Unfortunately, Standard Process doesn’t provide international shipment and because of this person from outside America can only purchase it from other retailers. Its price may vary, but if larger quantities are bought at once, discounts are usually offered. Additionally, regular clients can benefit from promotions and discounts.

The daily suggested intake of Linum B6 is one pearl per meal.

Advertised as a formula composed of two ingredients, Linum B6 enhances bodily systems including immune, hormonal and nervous. It offers essential fats like DHA or EPA that are known to enhance quality of the nails, hair, skin, as well as various others bodily functions and organs. In addition, vegetarians and vegans may follow this treatment too because it has no milk, egg, animal or yeast traces. On the other hand, it is important to take the pearls within recommended dosages because large intakes of its ingredients may harm the body. Due to this, pregnant or lactating women as well as people with known allergies to one of its ingredients have to consult their doctor prior to taking this remedy. 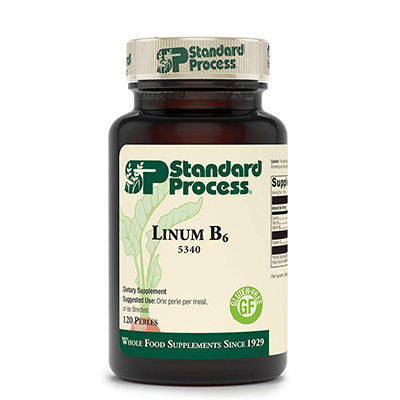 Things Customers Want to Know about Linum B6

clear
Q:
What does Linum B6 contain?
A:

Linum B6 includes the following ingredients: Vitamin B6 and Flaxseed Oil.

Linum B6 is a formula with two main components promoted as an immune, hormonal and nervous system enhancer. It was introduced in 1962 on the nutritional market and since then has helped people with medical conditions like ADHD, Alzheimer's disease, anxiety, or depression. However, people with allergies to flax seed oil can't follow this treatment. Overall, it works by delivering essential nutrients that positively affect the organism and enhance its functions and organs.

Q:
Are Linum B6 benefits actually a reality?
A:

Presented as a formula containing two ingredients, Linum B6 should enhance bodily systems such as immune, nervous and hormonal. It provides essential fats like EPA or DHA which are known to positively affect the quality of the nails, skin, hair as well as various others bodily organs and functions. Additionally, vegetarians and vegans can follow this treatment because it has no animal, egg, milk, or yeast traces. However, it is important to follow the treatment within recommended dosages because high intakes of its components may harm the body. Because of this, lactating or pregnant women, as well as those with known allergies of one of its ingredients, should consult the personal healthcare before taking this supplement.

We have found Standard Process to be an excellent product. My wife and I have taken them for years.

I have been taking this supplement for many years and it has helped with my flexibility which is better than when I was much younger! Am thrilled to see amazon carrying this line.