Mitochondrial Energy Optimizer with BioPQQ is designed to address problems that result from aging caused by the depletion of mitochondrial energy production function. Particularly, these problems may affect the heart and the brain, or may result in various inflammation processes at the level of vital organs. Mitochondria are present in all human cells and are responsible for the energy production that supports all life processes. In short, these mitochondria work to convert oxygen, and the fat, sugar, and protein we take from foods into usable energy, which the body uses for daily function and growth.

Aging comes with a wide spectrum of alterations in mitochondrial function, leading to loss of vitality, energy and various harmful effects on vital organs. The formula offered by Life Extension claims to work by protecting these cellular structures in order to allow them to perform life-sustaining metabolic processes, but also to help generate new mitochondria. Research on the core ingredient Bio-Pyrroloquinoline Quinone seems to support these claims, an we will further expand on that in the following section.

This supplement is offered by a popular USA manufacturer called Life Extension, a company with more than 35 years of market presence. According to official sources, the company heavily and continuously invests in research of anti-aging and disease, which is an effort powered by the desire to come up with out of the ordinary solutions to health issues of today.

1) What is Life Extension Mitochondrial Energy Optimizer with BioPQQ?

The formula claims to be available for a price lower by roughly 20% from the standard initial version. The key ingredient PQQ is a micro-nutrient similar in structure to a vitamin, although not yet classified as such.

It works as a powerful antioxidant which is capable of performing repeated oxidation and reduction reactions to a higher degree than other antioxidants. For instance, PQQ is able to carry out 20,000 catalytic conversions compared to only 4 for another important antioxidant – vitamin C.

Carnosine is another essential element of the formula, which exerts powerful anti-oxidant benefits against harmful radicals. Research has shown it to be beneficial in the case of heart functioning, as well as diabetes, atherosclerosis, and kidney health. In relation to brain and neurological health, studies have indicated that it helped improve cognitive function and physical capacity in the elderly, as well as people with autism. What is extremely important is that it is able to cross the BBB hence its increased effectiveness.

3) What Does Life Extension Mitochondrial Energy Optimizer with BioPQQ Do?

This is without a doubt an original formula, one that aims to deal with the effects that aging has on the body by targeting mitochondrial health. Mitochondria are found in every cell (in various numbers) and are responsible for cellular energy production by means of the adenosine triphosphate (ATP) cycle. As one ages, cellular vitality decreases due to a depletion of the mitochondrial energy-producing function, resulting in loss of vitality and sharpness.

A weak mitochondrial function can be at the core of poor brain and heart function, metabolic issues and inflammation processes of many types.
The formula is claimed not only to protect cellular structures, but to help create new mitochondria, which is revolutionary to say the least.
The key ingredient PQQ is a novel compound that seems to be involved in cellular growth, development, differentiation, and survival. Research links it directly to key enzymes involved in the energy producing compartments called mitochondria, and consequently PQQ is able to improve energy production. PQQ also works as an extremely powerful antioxidant preventing mitochondrial damage by oxidative stress. Last but not least, research to date seems to indicate PQQ also promotes the spontaneous generation of new mitochondria within aging cells, a process known as mitochondriogenesis.

Other ingredients include Taurine, an amino acid able to support overall health and boost new brain cell formation in areas of the brain linked to learning and memory processes.

Luteolin, a plant compound found in carrots, peppers, peppermint, rosemary, celery, olive oil, and chamomile among others is able to reduce age-related inflammation in the brain, inflammation that have been associated to memory deficits.

Consumer reviews are generally positive, which leads us to think this is a superior formulation able to improve both mental and physical stamina, better heart function, increased vitality, and superior brain parameters of consumers. Side effects are not mentioned by the manufacturer, nor were we able to identify from existing users. This does not mean however that they can’t occur, as each patient is different.

4) What Life Extension Mitochondrial Energy Optimizer with BioPQQ Does?

At a recommended dosage of 4 capsules per day, a bottle of this supplement will last for 1 month (each bottle contains 120 capsules). The price for a month’s supply can reach as much as $102, although most retailers start off at a list price of a little over $90. This is indeed an expensive form of treatment, nonetheless certain discounts and price promotions may lower the purchase price by 50% in some cases. The formula can be ordered online directly from the manufacturer’s official site, as well as from a large number of other online and offline retailers.

There are no side effects mentioned for the formula. Most unsatisfied customers report no effects whatsoever, and few unwanted side effects such as nausea. Still, the great majority of reviews from consumers is favorable and prays the supplement–s effectiveness in terms of advertised benefits.

The price of Mitochondrial Energy Optimizer with BioPQQ is rather high. For a month worth of treatment a patient can spend as much as $100, which is the price most retailers sell it for, if no other price promotions apply. Still, there is strong support from existing consumers confirming that the formula actually lives up to the expectations set by this rather high price. Taking into account that the market is filled with products that hide behind clever marketing, this supplement that looks like a —safe bet… may be preferable to some other product that sells for less. Price is not the only criteria to be considered, but rather the value for money should be.

Be cautious and do not neglect to consult a healthcare practitioner prior to starting use, so that unwanted effects or drug interactions are prevented. 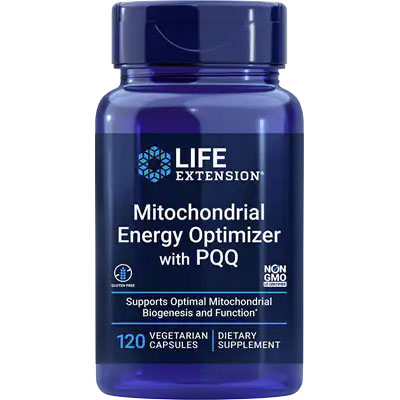 clear
Q:
What does Life Extension Mitochondrial Energy Optimizer with BioPQQ contain?
A:

Q:
What is Life Extension Mitochondrial Energy Optimizer with BioPQQ?
A:

Mitochondrial Energy Optimizer with BioPQQ is offered by Life Extension as a formula able to support optimal mitochondrial biogenesis and function. The supplement will counteract the effects aging has on vital organs such as the heart, the brain, minimizing inflammatory processes caused by a depleted mitochondrial energy-producing function. The formula features Pyrroloquinoline Quinone, Carnosine, Taurine, and R-alpha lipoic acid as core ingredients.

Pyrroloquinoline Quinone is a novel rejuvenating compound which has been shown to contribute to mitochondrial growth. The supplement is a 20% less expensive, equally effective, re-formulated version of the company's Mitochondrial Energy Optimizer

The combination of ingredients featured in this formula is indeed unique, in a market where supplement ingredients list tend to copy one another, with minor differences that make the subject of sleek marketing headlines rather than making a difference in actual benefits. The research involving the main ingredients is promising, as well as the feedback the supplement has received from consumers. Plus, you have to take into account the great reputation of the manufacturer when making a decision among so many all to similar formulations.

Despite the rather high price of the formula, it actually enjoys a great deal of popularity - a fact you cannot ignore in your evaluation of the formula. Still, it is highly advisable that you check with your healthcare practitioner prior to using the supplement, as side effects may appear. Given that each patient is different, a thorough check of your background is most advised prior to starting treatment.