Brain Regain is a nootropic supplement marketed as a remedy for supporting cognitive and memory performance. This formula features mainly herbal extracts, and it is claimed to reduce acetylcholine breakdown. It is designed and manufactured by “Protocol for Life Balance.” The company is based in the US, are an A-rated GMP manufacturer and a leading producer of high-quality dietary supplements. The company claims that their products comprise of clinically well-researched ingredients that are intended to support healthy physiological function.

1) What is Brain Regain?

The human brain is typically bound to losing focus and memory as a result of factors like the aging process or when disrupted by unusual stimuli. When an individual age up, the brain loses some neurons that are responsible for the cognitive functioning as well as the connectivity between other parts of the body. Brain Regain is a natural dietary supplement that is designed to help in boosting cognitive abilities of a consumer. It is known to increase the speed of the brain in processing information and clarity of the mind. It contains following ingredients.

Huperzine A – It increases the levels of acetylcholine, dopamine and other neurotransmitters in the brain and has been shown to treat the symptoms of Alzheimer’s disease. Huperzine A might slightly improve cognition and memory in patients with Alzheimer’s disease and vascular dementia; however, some studies prevent firm conclusions. It appears safe and effective for short-term use, but scientific evidence for long-term safety is lacking.

Ginko Biloba – also known as maidenhair, is an ancient herbal extract that has been used for centuries to heal various brain health ailments. This herb is known for its effective anti-inflammatory, antioxidant and circulation-boosting effects. Many of ginkgo’s most prominent advantages are tied to cognitive function like concentration and memory as well as mental performance.

Phosphatidylserine – It improves brain cell communication and increases the levels of brain chemicals involved with memory. Although it’s not a cure, taking phosphatidylserine in supplement form can improve the symptoms of dementia and Alzheimer’s disease.

Roseox – Known for its free radical scavenging properties, roseox nourishes the brain, improves memory and cognitive functions. Along with increasing your mental performance, it also reduces the harmful effects of stress, anxiety, or depression.

RoseOX is also featured in other nootropics like Brain Elevate.

4) Precautions of Brain Regain Use

Elders and students are the priority of this formula, as it gives a psychological boost for young people, allowing them to concentrate better, and for the elderly, it will act out as an invigorating and nourishing effect on the brain.

Brain Regain is a nootropic supplement that supports cognitive performance and memory. This supplement might work since it comprises scientific-based ingredients like Ginkgo Biloba, Huperzine A, Phosphatidyl Serine and RoseOx. It is also free from harmful ingredients and artificial additives. But still, we advise customers to seek further information about this product before purchasing it. 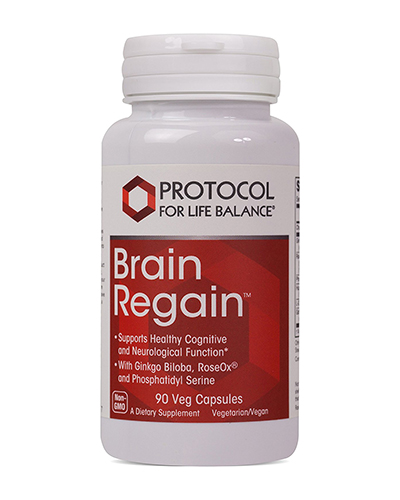