Brain Candy is not like most other brain supplements we have reviewed on brainreference.com. This formula is a bit of everything, trying to do two things at once. Produced by the UK manufacturer Biotest, this product claims to offer a boost of energy for the day, fat loss support, cognitive enhancements, and much more.

When it comes to brain supplementation, there are two major types of brain supplements: nootropics (that are more focused on providing cognitive support, such as better memory, better focus, etc) and stimulants (usually caffeine-based products). Brain Candy is a little bit of both; part brain enhancer and part caffeine shot.

Brain Candy is a brain/bodybuilding supplement claimed to support fat loss, improve memory, focus, and to support cognitive abilities. The product has an official website, but it’s not as informative as we would like it to be. Aside from some testimonials and Biotest’s claims to what Brain Candy does for you, the website doesn’t offer much else. Strangely enough, you can find a lot more useful information about the product by checking out some of their online retailers like T-Nation or Vitamin Shoppe.

If you decide to try this supplement, we strongly recommend to reduce your caffeine intake throughout the day. Combining Brain Candy with additional caffeine intake may result in unwanted side effects.

Aside from the massive amount of caffeine, the formula also includes some high quality ingredients, and with its base formulation already amounting to a whopping 4500 mg, we’ll have to say that it is quite potent.

Overstimulation can also lead to mood swings and stress-related headaches. If you feel like you’re overstimulated and need a helping hand, try mood support supplements like Sunny Mood.

Brain Candy is advertised as a bodybuilding supplement. Checking out their official website, it seems that there isn’t really a lot of information readily available, aside from several testimonials and company’s claims to what Brain Candy does for you. In any case, the supplement seems better advertised by their online retailers like Vitamin Shoppe and T-Nation. These retailers will give some in-depth product description and even a supplement facts label.

If you decide to give Brain Candy a try, you might want to reduce your caffeine intake throughout the day. Overdoing it isn’t going to kill you, but it may result in some unwanted side effects.

Aside from the huge amount of caffeine, Brain Candy has some high quality ingredients in its formula as well, and with its base formulation already amounting to a whopping 4500 mg, we’ll have to say that it is quite potent.

Let’s take Acetyl L-Carnitine for instance. This “enhanced” version of Carnitine may not only aids in fat burn, but also offers benefits to the brain due to its ability to cross the brain-blood barrier. It aids in the production of acetylcholine, which is a neurotransmitter responsible for improving memory, learning, problem-solving ability, and general cognition.

5) What You Need to Know Before Taking Brain Candy

6) How Much Does Brain Candy Cost?

A pack of Brain Candy costs $36.00 (but the price may vary from one retailer to another), which consists of 16 shots. At the one shot per day serving size, this means that a month’s supply (if taken every day) actually costs $72.00, which is quite expensive compared to other similar stimulants. There is also a smaller pack consisting of 4 shots for $9.99.

While the recommended daily serving is usually just a suggestion, we highly urge you to pay heed to this one. We highly advise against taking more than one shot of Brain Candy per day just due to the fact that it has 300 mg of caffeine per shot. It’s generally agreed upon that the maximum daily consumption of caffeine is 400 mg, so there isn’t really much room for error – even when taking just one bottle per day.

7) How to Use Brain Candy

CDP Choline, for instance, is one of the highest-quality sources of choline available. Clinical studies showed that CDP Choline may aid in the production of the neurotransmitter acetylcholine. It is a very potent memory enhancer that also has positive long-term benefits for the brain. It promotes connectivity in the brain as well, creating new connections while also repairing damaged brain cells.

Overall, Brain Candy’s formula is very potent; perhaps too potent. While there are indeed some great ingredients included, with a high amounts of nootropics, the massive amount of caffeine may also be a hindrance.

Do we recommend it? Well, Brain Candy may be a good choice if you workout with regularity as it may give you that extra bit of energy you need. However, don’t overdo it and definitely don’t take more than the recommended dose. 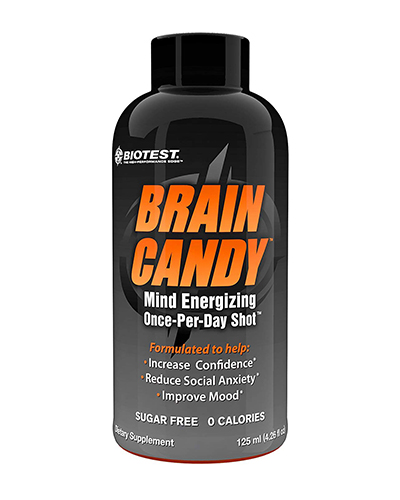 clear
Q:
What are the active ingredients in Brain Candy?
A:

Q:
Are Brain Candy benefits actually a reality?
A:

Brain Candy is produced by a company that makes many other popular supplements. However, we had some mixed views on this formula. While the product looks potent enough and has a lot of interesting nootropic ingredients, the amount of caffeine is ridiculous and simply overpowers the rest of the formulation.

Fortunately, there aren't many reported adverse side effects, and if any, they only occurred in rare instances. Also, based on the testimonials available online, most consumers are happy with the results.

The bottom line is that if you aren't hitting the gym so often, you really shouldn't be using Brain Candy – and even then, you probably should only be using it as pre-workout.