IGF-1 Deer Antler Velvet Extract Lipospray is presented to be a dietary supplement that is used in order to improve endurance, strength and immunity, it also has an anti-aging effect and can improve memory as well. The company that developed and manufactures this formula is called BioSynergy Health Alternatives and prides itself on having the best vitamins and supplements. This business was established in 1994 and is situated in Idaho, United States; the goal of this company is to aid people to live a long and full life and aims to provide high-quality nutritional supplements that are meant to extend one’s life span and provide better life quality.

IGF-1 Deer Antler Velvet Extract Lipospray comes in the form of a lipospray that is to be used under the tongue. This product is said to have many health benefits, some of them are: the prevention of anemia, the reduction of cholesterol, the prevention of colds or even wound healing. This formula also provides support for joints, playing a role in the prevention of arthritis. IGF-1 Deer Antler Velvet Extract Lipospray has also been shown to improve athletic performance by sustaining the development of muscle strength and endurance and also by promoting a better and faster recovery form muscle injury.

IGF-1 Deer Antler Velvet Extract Lipospray is a dietary supplement that is based on three main ingredients and has a wide range of positive effects that sustain general health.

One of the main ingredients is IGF-1 and is a polypeptide compound that is produced from the Human Growth Hormome. This substance is shown to increase the transportation of amino acids to muscle cells in the body, thus aiding with the regeneration of tissues after exercises. Deer Antler Velvet is an other ingredient found in this blend and is mainly used to repair damaged muscle tissue. Scientific studies have shown that it also supports immunity, tissue and joint, blood health and blood pressure. Stevia is the last main ingredient that is used in order to formulate this product and is a plat that is native to South America. Some of the most common used for this plant is in treating diabetes high blood pressure and also heartburn, it also aids in the process of losing weight. People also used it as to prevent pregnancy and to increase the strength of muscle contractions that are responsible for the pumping of blood from the heart.

3) Does IGF-1 Deer Antler Velvet Extract Lipospray Work and it is Safe?

Advertised as a beneficial dietary supplement, IGF-1 Deer Antler Velvet Extract Lipo Spray is composed of IGF-1. Evidence has shown that IGF-1, produced from HGH (Human growth hormone), is a polypeptide compound. The fact that the liver and other tissues participate in its conversion into Insulin-like Growth factor determines some of IGF-1’s attributes that include: anti-aging effects and strength and muscles increase. Also, this polypeptide regenerates muscle tissues after exercise because of increases amino acid transport into the muscle cells, throughout the entire body. There are no long-term studies until now about the IGF-1 side effects.

Another compound found in this supplement is Deer Antler Velvet extract. Obtained by cutting the antler of deer, close to the base, before any calcification takes place and after it is around two-thirds of its possible size. This ingredient should prove effective like an anti-cancer, anti-inflammatory, immune stimulant and pro-growth agent. However, these claims have not been supported by scientific study. Red deer and elk provide the vast majority of velvet antler’s supply. Although there are no significant side effects related to the usage of Deer Velvet Antler, pregnant and breastfeeding women as well as people with hormone-sensitive conditions such as breast cancer, uterine cancer, and ovarian cancer should stay away from this product.

There are few online customer testimonials. What is being stated includes the following:

IGF-1 Deer Antler Velvet Extract Lipo Spray is sold by 30 ml bottles. It can be purchased either from manufacturer website as well as some other online retailers Its price is affordable, especially when bought in larger quantities because discounts are offered.

The bottle in which this formula is manufactured contains 93 servings and can provide sufficient formula for one month to one and a half months.

IGF-1 Deer Antler Velvet Extract Lipospray is advertised to be a multi purpose supplement that sustains health on several levels. It provides help with the circulatory system, nervous system, and it also sustains muscle development, making it a good choice for people that aim to have a healthier body or for athletes that need an edge. Clinical studies have shown that most of the manufacturer’s claims are valid, but future studies will show the true and long-term effect of some of the ingredients found in this blend. No free trials are available at this time, but a full, 30-day money-back guarantee is presented if this formula is purchased from the manufacturer’s website. 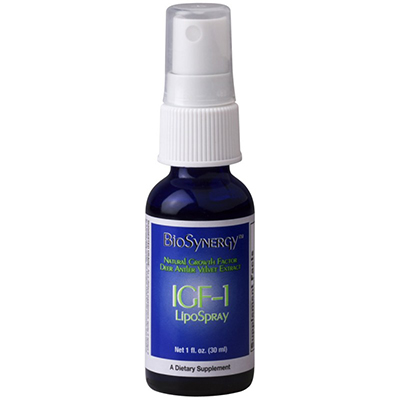 clear
Q:
What are the IGF-1 Deer Antler Velvet Extract Lipospray ingredients?
A:

Q:
What is IGF-1 Deer Antler Velvet Extract Lipospray?
A:

IGF-1 Velvet Exctract Lipo Spary is advertised to be a formula that can supports strenght, recovery or boost immunity. The company that manufactures this product is called BioSynergy Health Alternatives, an Idaho, United States business. IGF-1 Velvet Exctract Lipo Spary employs the power of ingredients such as Cervi parvum cornu or Stevia extract in order to aid with the increase of muscles, prevention of colds, and memory improvement.

Advertised as a product that can improve strength, endurance, and recovery, IGF-1 Deer Antler Velvet Extract Lipo Spray is composed of a combination of two herb extracts and IGF-1. It is formulated to be absorbed when sprayed beneath the tongue. Although there is not sufficient information regarding the Effectiveness of this remedy, the online testimonials tend to promoted as a good formula. Because this is a supplement, it should be balanced with a healthy lifestyle for optimal results. Pregnant women and people with hormone sensitive conditions should stay away from this product.