Probiotic 30 Billion CFU’s is a dietary supplement offered for the support of the immune and digestive function through a blend of 30 billion colony forming units (CFU’s) from 8 bacteria strains that assist a healthy balance of the intestinal microflora. This supplement is created by Healthy Origins, and is based on the proprietary combination of probiotics FloraFIT developed by DuPont Danisco Probiotics. The manufacturer advertises their formula as highly effective particularly because the active ingredients have the ability to survive the destructive action of stomach acid making them available in the intestinal tract, where they are actually needed.

This formula is designed to support the health of adults concerned with maintaining a positive balance of bacteria colonies. These microorganisms are known to be destroyed by antibiotics, stress and gastrointestinal disturbances. The supplement is marketed as stable whether it is storage at room temperature or refrigerated. The fact that the essential probiotics come in the patented Vcap form, is another advantage as this is a pure, yet effective solution that allows an effective release of active substances.

Probiotic 30 Billion CFU’s is based on beneficial bacteria that have been researched and scientifically shown to improve overall health in various ways. The registered trademark combination of probiotics is advertised as a popular ingredient used not only in nutritional supplements, but also within beverages and a large variety of foods.

1) Probiotic at a Glance

Probiotic 30 Billion CFU’s is a probiotic based dietary supplements. Probiotics are a type of bacteria considered beneficial for the human health. This formula includes 4 strains from the Lactobacillus family, and 4 from the Bifidobacterium family.

Lactobacillus consists of many species of bacteria usually found in the digestive and genital systems. Their most popular health benefits are in preventing and treating infectious diarrhea, irritable bowel syndrome, urinary tract infections, respiratory infections in children or adults on ventilators, skin disorders (eczema, acne, cancer sores), high cholesterol, and vaginal infections. Powerful immune boosting properties have also been attributed to the bacteria. However scientific studies suggest noticeable benefits only in the case of certain types of diarrhea, IBS, and vaginal infections caused by bacteria. Scientific evidence in most for the other health claims is inconclusive. Some side effects in the form of intestinal gas and bloating have been reported, but the bacteria is considered likely safe for most people (including pregnant and breastfeeding women and babies). Patients suffering from conditions that attack the immune system (HIV/AIDS) and short bowel syndrome should take extra precautions before consuming lactobacillus based products.

Bifidobacterium are also beneficial living microorganisms naturally occurring in the gut flora. They are important in the synthesis of the B complex of vitamins and vitamin K. The latter are fundamental nutrients involved in a large number of processes including healthy blood clotting, healthy bones, normal energy levels, optimal growth and development, and proper function of the nervous system. This group of bacteria is responsible for improving immune and digestive functions due to their abilities of reducing production of histamine (known to trigger allergic reactions). Research has also indicated that Bifidobacterium may prevent healthy cells from transforming into carcinogens (cancer cells). Bifidobacterium species reported similar side effects to those identified with the use of Lactobacillus. The safety during pregnancy has not been fully evaluated.

Probiotics are also sometimes used in conjunction with CoQ10 supplements like Raw CoQ10.

The suggested dose for this supplement is 1 Vcap 1-2 times per day before or during meals.

5) Precautions of Probiotic Use

6) How Much Does Probiotic Cost?

Probiotic 30 Billion CFU’s comes at a relatively high price, as listed on the official site. However, at this time, the formula benefits of a substantial discount which makes a month’s supply affordable. Unlike other of this producer’s formulations, this product doesn’t come with a volume discount. Shipping charges for US costumers are affordable. All US orders exceeding $100 are accompanied with free shipping. For international orders, the value of the shipping taxes is not disclosed and varies depending on the delivery options selected by each customer.
Online transactions are secured against potential threats (such as identity theft). There is no money-back guarantee or free trial option mentioned.

The suggested dose for Probiotic 30 Billion CFU’s is 1 Vcap 1-2 times daily with or before meal. The effectiveness of the supplement is supported by a large number of consumers.

8) Our Final Take On Probiotic

Healthy Origins formulation is designed to support a positive balance of the intestinal flora through a potent blend of beneficial bacteria. The active ingredients are commonly used to regulate the body’s natural supply of microflora. The particularity of the formula is the large number of strings included which enhances benefits range and offers a more complete support.

Consumers also support the potency of Probiotic in reducing symptoms of a large number of conditions including vaginal infections, intestinal discomfort, stomach flu, indigestion, IBS, etc. The value for price ratio is evaluated as highly advantageous. The formula contains one of the largest numbers of bacteria as compared to similar supplements. However, the product is not clinically researched and was not approved to diagnose, treat, cure or prevent any disease, as established by the FDA. Considering that probiotics have been reported to cause side effects in people suffering from specific affections of the immune system and bowel, Probiotic should be considered with precaution. In any case, the healthcare professional’s opinion is the best way to go when considering to use a formula of this type. 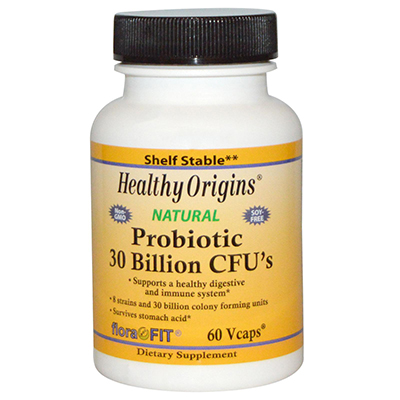 Customers Questions and Answers with Probiotic

clear
Q:
What are the Probiotic ingredients?
A:

Q:
What is Probiotic?
A:

Probiotic 30 Billion CFU's is a bacteria based nutritional formula that features a total of 30 billion colony forming units (CFU) that come from 8 bacteria strings, marketed to support a healthy digestive function and immune system. The product is offered by Healthy Origins and is based on the customizable probiotics solution called FloraFIT. This registered trademark features a large number of bacteria strains and is advertised as a flexible, stable and proven effective formulation that can be successfully integrated in a large number of products. The supplement includes 8 of the patented formula's strains from 2 families of bacteria: Lactobacillus and Bifidobacterium. These species were clinically researched and were shown to provide a positive support for healthy digestive, immune and genital systems. Probiotic 30 Billion CFU's is designed for the use of adults in doses of 1-2 Vcaps daily.

Probiotic 30 Billion CFU's is a supplement offered as a digestive and immune system support. The formula is based on a patented selection of bacteria containing the widest number of strains available in the industry of probiotics. This particular formula includes 8 of these strains, in quantities that are listed on the official web page and label. The formula is advertised to have several advantages from similar supplements, including the lack of artificial substances and common allergens. The manufacturer makes no mention regarding potential side effects or drug interactions, but it is highly probable that adverse reactions may derive from some of the active ingredients.

Probiotic based supplements, beverages, and foods are available in a relatively large number. Dietary supplements come in various forms, but Healthy Origin's formula seems to be one of the most complete concerning active substance amounts. A large number of testimonials are available for consultation, and most of them appear to support the claimed benefits. However, scientific research involving the whole formula has not been conducted, and the best way to verify if this is a safe solution for the consumer's particular problems is to ask a competent medical opinion.

The product offered by Healthy Origins seems to be one of the most complete probiotic formulas available. The doctor has recommended this supplement to restore my intestinal flora after a prolonged use of antibiotics! After a few months I went to see him again and my lab tests showed significantly increased number of bacteria colonies. I definitely recommend the formula!

I simply love this product and how fast it has helped me improve digestion and get rid of the discomfort I used to feel after every meal. I have taken other probiotics, but none was as effective!