Alpha Lipoic Acid is a dietary supplement based on the antioxidant properties of Alpha Lipoic Acid. Healthy Origins, the manufacturing company, mentions no apparent benefits, nor does it make any ailment claims for the formula, probably due to the increased popularity and abundance of information already available on Alpha Lipoic Acid.

Alpha Lipoic Acid features the antioxidant Alpha Lipoic Acid, which is naturally produced by the body and plays vital functions. It is an essential element of the energy production process.

It can also increase glucose uptake by the muscle, contributing to muscle mass growth and preventing fat accumulation.

Alpha-lipoic acid is both water and fat-soluble; this is why its effectiveness applies to most body tissues.

As an antioxidant, ALA has neuro-therapeutic effects and has been linked to benefits against several conditions caused by free radicals, including age-associated cognitive decline, multiple sclerosis, mild dementia, and memory loss. Several clinical studies indicate that Alpha Lipoic Acid may inhibit cancer cell proliferation and fight aging’s cosmetic effects.

ALA is clinically studied and demonstrated to prevent and treat numerous conditions, including diabetes, Alzheimer’s, and stroke.

Free radical damage accounts for various ailments and diseases cancer, heart disease, rheumatoid arthritis, and aging processes in the body. The human body is endowed with antioxidants (Vitamin C, Coenzyme Q 10, Selenium, and many others).

ALA is one such antioxidant, particularly crucial due to its unique property of soluble in both water and fat mediums. Its effects hence can extend at the level of the entire body. Evidence on Alpha Lipoic Acid shows its potential benefits against liver damage, HIV-associated symptoms, diabetic neuropathy, etc.

At the brain and neuronal function level, ALA may assist with dementia prevention, Alzheimer’s, mild cognitive impairment, enhanced memory, and even support for older patients’ cognitive function.

Additionally, Alpha Lipoic Acid can promote the regeneration of other antioxidants in the body, such as Vitamin C, Vitamin E, and Glutathione, which makes its presence even more valuable.

There are testimonials posted online about Alpha Lipoic Acid. What is being said includes the following:

5) What You Need to Know Before Taking Alpha Lipoic Acid

6) How Much Does Alpha Lipoic Acid Cost?

The formula is available in 60, 120, and 150 capsules bottles. The price is extremely affordable; for instance, the 120 capsules bottle (a 4 month supply) costs roughly $15, no discounts added.

Compared to other products with the same Alpha Lipoic Acid concentration, the Healthy Origins formula is cheaper. The supplement is available for purchase on the manufacturer’s website and on other online and offline retailers.

7) How to Take Alpha Lipoic Acid

Side effects of ALA are rare and may manifest as rashes. The recommended daily dosage is one capsule.

A significant number of consumer reviews are available online on Alpha Lipoic Acid, most of which are positive and support the formula’s effectiveness for various claims.

As it happens with most dietary supplements, Alpha Lipoic Acid is not supported by actual scientific evidence.

However, it does contain a single active ingredient that has been tested and researched. Consumer testimonials are a vital effectiveness assessment tool, and this product has generally received positive results.

This is why we are inclined to believe the formula will likely produce beneficial effects for its consumers. Still, we advise caution and recommend you, not self administrate dietary supplements but rather to get a specialized opinion before using. 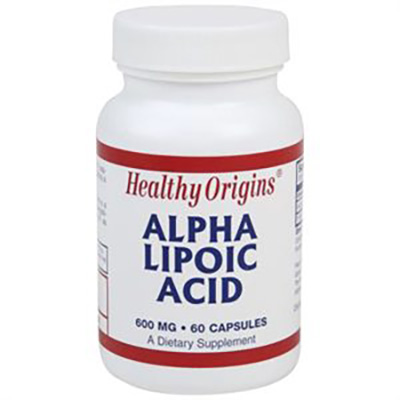 clear
Q:
What are the active ingrediens in Alpha Lipoic Acid?
A:

Q:
What is Alpha Lipoic Acid?
A:

The formula manufactured by Healthy Origins can provide assistance for numerous health aspects, diseases, and conditions.

Alpha Lipoic Acid has been touted for its numerous benefits in some conditions. Most importantly, ALA is water and fat-soluble and can help replenish the reserves for other antioxidants naturally found in the body.

Alpha Lipoic Acid has received numerous positive reviews from consumers. Although the manufacturer offers little information on potential benefits, the existing research and testimonials can help put up a list of its core properties.

No side effects or precautions are mentioned for the formula; however, this is a dietary supplement and is not regulated by the FDA or any other institution.

I have read about the vascular genesis effects of Alpha Lipoic Acid and I’ve been taking this for several years now. I am almost 60 but no one will guess. Most people think I am 48. I feel great!

My wife, who is a diabetic, uses Alpha Lipoic Acid for many years. It helps her reduce the amount of insulin used and has experienced no neuropathy so far. We are very pleased with this formula and the price is more than affordable.