Ginkgo Brahmi’s core marketed benefits include improved memory and support for the cognitive function. The formula offered by Blackmores contains two herbs which have long been used by traditional medicine to improve memory and mental capacity. The product is designed for adults and children over 12 years old who wish to improve or support basic cognitive functions such as memory, concentration and alertness. The formula is not recommended for use during pregnancy or breastfeeding, due to unknown potential side effects and their extent.

Blackmores, the manufacturing company claims to be Australia’s leading natural health brand. The company was founded over 70 years ago and has received since numerous awards and recognition for its high quality products, excellent professional standards and contribution to the Australian natural health industry.The manufacturer mentions no research or clinical studies to support the product benefits.

Ginkgo Brahmi contains standard extracts of the two ingredients, which, as opposed to non-standardized extracts are generally used in various clinical trials an research studies and hence they can be associated to side effects and clear benefits.

1) What is Ginkgo Brahmi?

Ginkgo Biloba is a widely researched herb and the subject of numerous clinical trials who have revealed it is most effective in improving blood circulation, memory and concentration, but also possesses strong neuro-protective abilities. Although a daily dosage has not yet been established, Ginkgo Biloba has been reported to produce mild and rare side effects in case of large quantities consumed. These side effects include dizziness, nausea or headache. More serious but rare side effects may occur, and include: easy bleeding/bruising, fainting, irregular heartbeat, paralysis, muscle weakness, restlessness, seizures, slurred speech and severe headache or vision problems.

Brahmi is a traditional Ayurvedic herbal remedy, commonly used against anxiety, stress and for memory improvement. The manufacturer mentions mild laxative effect, dizziness and headache as potential rare side effects. We could not identify any consumer reviews for this supplement in particular. No adverse effects or special precautions are mentioned in relation tothis formula.

Brahmi is also sometimes used together with other nootropic ingredients, like in this memory formula by Brainol.

Advertised as a memory booster and a cognitive enhancer, this supplement contains a combination of two herbal extracts with well-known individual properties. Evidence has shown that Ginkgo Biloba helps increase blood flow and normalizes circulation, thus having a relaxing effect on arteries. Also, it may have a tonic effect on veins. Because brain cells require large amounts of energy to function properly, oxygen and glucose should constantly be supplied to the cells. The brain reserves of energy are limited; sometimes supplementation is needed for proper functionality. However, consumption of Ginkgo may increase the risk of bruising because it thins the blood, therefore interfering with the clots formation. Other side effects include allergic reaction, constipation, and alert heartbeats.

The other constituent ingredient found in this remedy is Brahmi, a herb which has been traditionally used to improve mental capacity and memory. Some studies suggest other qualities of Brahmi usage, such as improving speed and rate of information as well as concentration. On the other hand, Brahmi may slow the heart beats. Therefore it is not recommended for people who have a slow heart rate. Common side effects of Brahmi supplementation include nausea, fatigue and stomach cramps.

There are no online reviews regarding the Effectiveness of Ginkgo Brahmi; therefore, people only have the description as an orientation point.

5) What You Need to Know Before Taking Ginkgo Brahmi

Sold by bottles containing 40 tablets, Ginkgo Brahmi is an averagely-priced product, especially in comparison with similar natural remedies. It is usually found for purchase either on the manufacturer’s website or with some other online and offline retailers. The manufacturer’s website makes no mention of a money-back guarantee whatsoever, but perhaps more info could be obtained if you inquire company representatives.

A bottle is sufficient for a month of treatment. When bought in larger quantities, discounts and promotions may be offered.

Ginkgo Brahmi is a blend of two of the most popular memory enhancement herbal ingredients used today: Ginkgo Biloba and Bacopa Monnieri. The manufacturer, the Blackmores Company, is one of Australia’s leading health products manufacturer and a guarantee in its own right for the quality of the formula.

Still, there is no evidence to support Ginkgo Brahmi’s effectiveness, nor could we find any consumer testimonials to get a fair picture of the product. The manufacturer offers a detailed list of the ingredients’ spectrum of beneficial effects, potential side effects of the product and dosage and administration.

There is no money back guarantee applicable to the product. We recommend a doctor’s advice prior to starting treatment. 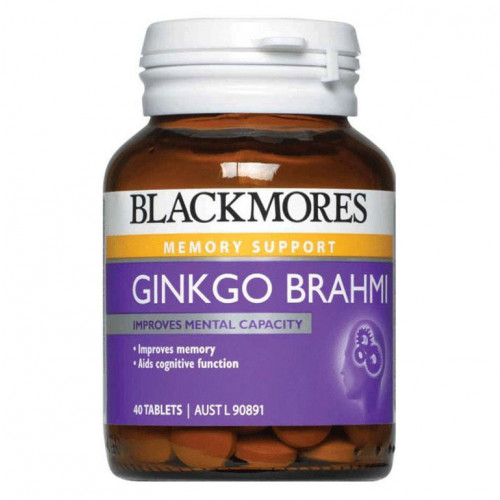 clear
Q:
What are the Ginkgo Brahmi ingredients?
A:

Q:
Ginkgo Brahmi is all about what?
A:

Ginkgo Brahmi is an herbal supplement meant to improve memory and aid cognitive function. This product is offered by the Blackmores Company. Its active ingredients are the Ginkgo biloba extract, which increases blood flow, helps normalize circulation and has a relaxing effect on arteries and a toning effect on veins, and the Bacopa monnieri (Brahmi) extract, a plant which studies suggest can improve concentration and speed of information processing as well as learning rate. No side effects are disclosed for the combination, however the individual ingredients may cause adverse effects.

For people to obtain proper brain functionality, instead of medication, they may choose dietary supplementation, which has fewer side effects with similar potency. A remedy that claims to achieve this is Ginkgo Brahmi, which contains a combination of two herb extracts with important individual properties. However, there are some contraindications and cautions related to the usage of this product, such as: causing mild laxative effects and determining headaches and dizziness on occasions.

If any of the above-mentioned side effects occur, it is advised to stop the treatment and consult a healthcare provider. Because this product is merely a supplement, it doesn't replace a healthy diet, and it should be balanced with a good exercising program and a normal sleep schedule.

I’ve been taking ginkgo supplements for years now and i like this one. It’s the best i’ve tried so far. actually felt a difference: learning faster, remembering better. Great! 5/5

I’ve had an unpleasant experience with Ginkgo Brahmi. it gave the most horrible headackes. won’t be buying again.