Echinacea-C Review – 8 Things To Look For

Echinacea-C is an herbal remedy meant to improve the number of healthy white cells, hence improving the immune system. This remedy is featured in the Standard Process product line and was introduced on the nutritional market in 1998.

The manufacturer is headquartered in the United States and was founded in 1929. Compared to similar businesses, Standard Process separated their products into three product lines which are Standard Process Veterinary Formulas, Standard Process whole food supplements and MedHerb. They have released approximately three hundred products which include veterinary formulas, dietary supplements and herbal remedies. Despite their assurance of the GMP certification regarding their appliances as well as the labeling systems, they haven’t been FDA approved.

Echinacea-C features a combination between Echinacea and Vitamin C meant to improve the immune system by providing proper nutrients. Nevertheless, the manufacturer suggests that people with allergies to daisy plants and pregnant or lactating women should consult their medical doctor before using it. Furthermore, the low-temperature and high-vacuum drying technologies should preserve the nutritional qualities and the ingredient’s enzymatic vitality, hence the product seems like a better option compared to similar ones. Additionally, the ingredients are claimed not to be dissociated into isolated components, hence the nutrients from Echinacea-C provide complete and intact nutritional compounds.

Echinacea-C concentrates on improving the immune system by providing necessary nutrients in a mixture between Vitamin C and Echinacea.

Research revealed that Echinacea is a purple coneflowers plant which is native to America. It has been traditionally utilized for strengthening the immune system and also enhancing the general well-being. Despite the fact that Echinacea angustifolia is regarded as more potent in comparison to the cultivated purple coneflower called Echinacea purpurea, both of them were found as effective for the immune system and are a part of this formula.

Echinacea works by supporting the nonspecific cellular immunity due to the fact that it helps the while blood cells while phagocytosis, the process of engulfing, destruction and cleaning up unwanted organisms and defective host cells. In addition, it stimulates the phagocytic activity of macrophages and polymorphonuclear neutrophil granulocytes, hence enhancing the number of cells that are natural killers for the unwanted organisms in the body.

Some clinical studies showed that Echinacea helps stimulate the release of cytokines, a substance responsible for some aspects of the immune system such as swelling, redness or enhance in the body’s temperature. The body uses cytokines in order to increase its defense levels.

Echinacea works by supporting the immune system, especially nonspecific cellular immunity because it helps the white blood cells during phagocytosis, the process in which the cells destroy, engulf and clean up the unwanted organisms as well as defective host cells. Additionally, it stimulates growth in phagocytic activity of polymorphonuclear neutrophil granulocytes and macrophages, thus increasing the number of the natural killer cells.

Some clinical studies conducted in laboratories revealed that Echinacea might help stimulate the release of an immune controller that goes by the name of cytokines, a substance which is responsible for controlling some aspects of the immune system like redness, swelling, or increase in the body’s temperature. The human body utilizes cytokines to marshal its defense levels.

Despite being considered safe for short-term usage, there is no sufficient information to view Echinacea safe on long-term usage. Some side-effects like dizziness, disorientation, insomnia, or muscle aches may appear.

There are online consumer testimonials about Echinacea-C. What is being reported includes the following:

6) How Much Does Echinacea-C Cost?

First introduced on the market in 1998, Echinacea-C is often viewed as a moderately-priced supplement. It can be bought both from Standard Process official website as well as some other retailers. However, the price varies depending on the retailer, and it can get cheaper if larger quantities are purchased. The supplement is sold in bottles that contain ninety tablets, and considering the recommended daily intake of a tablet per day, a bottle is enough for ninety days of treatment. Unfortunately, international shipment is not offered by the manufacturer. Thus people outside the American continent should seek it with other retailers.

The daily recommended intake found on the label of the product is one tablet per day, with water or as advised by the personal healthcare.

By providing a natural alternative to drugs, Echinacea-C represents a herbal remedy meant to enhance the immune system. Because of this, people that suffer from common colds or issues related to an improper functioning when it comes to the immune system can benefit from it. On the other hand, those with allergies related to consuming nutritional supplementation based on plants from daisy family are advised to consult their physician.

The formula uses a combination between Vitamin C and Echinacea which should provide the required nutrients for an overall health improvement, specifically related to the immune system. The remedy was first released in 1998 and has mostly had good testimonials since then. 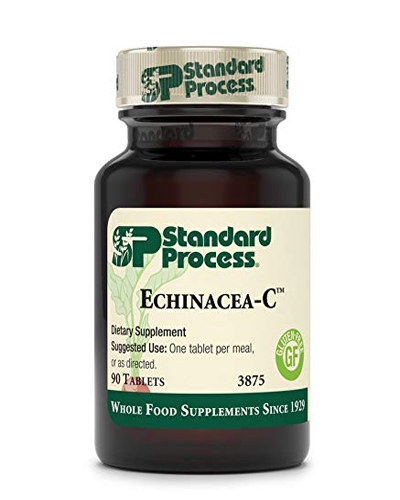 Customers Questions and Answers with Echinacea-C

clear
Q:
What are the active ingrediens in Echinacea-C?
A:

Q:
What is Echinacea-C supplement?
A:

Echinacea-C is promoted as an herbal remedy that features a combination between Echinacea and Vitamin C meant to enhance the immune system. The product is a part of Standard Process and was first introduced on the nutritional market in 1998. It works by offering required nutrients in order to increase production of white blood cells. However, people with allergies to the daisy plants as well as pregnant or lactating women should avoid this product.

By offering a natural alternative to prescribed medicine, Echinacea-C is a product meant to stimulate the immune system. Therefore, people suffering from common colds or other issues related to a lack of the proper functioning of the immune system may benefit from it. However, those with allergies regarding the daisy family should previously consult their physician.

The formula features a mixture of Echinacea and Vitamin C which should offer the proper nutrients for a general body improvement with a focus on the immunity. The supplement was introduced on the market in 1998 and has had a fair share of good reviews since then.

I have been able to get rid of a cold in only 2 days! I first purchased a bottle from my chiropractor about 6 months ago and I have been hooked every since.