Ubiquinol is a nutritional supplement designed to support a healthy lifestyle, energize the body and the mind and reduce the typical signs of aging.The formula is offered under the brand of Dr. Mercola, developed by Dr. Joseph Mercola, a licensed osteopathic physician trained in both traditional and natural medicine. He is the one who funds a website especially designed to inform people about products available on the market which bring the most benefits to their users and about some wrongfully advertised formulas.

The formula is based on a substance called Ubiquinol, which is converted from the enzyme CoQ10. It is the active form of the CoQ10 nutrient and is believed to have beneficial effects on the energy levels, heart, circulation and blood pressure, immune and nervous system. Ubiquinol also acts as an antioxidant helping the body to fight against oxidation stress and to recharge other antioxidant nutrients.

Ubiquinol is advertised as a multi-benefit formula based on a single active ingredient which is the active form of coenzyme CoQ10, Ubiquinol.

Ubiquinol is the fully reduced form of Coenzyme Q10 and can be found in nearly every human cell, tissue and organ (and generally in all mammals). Its main function is to transport electrons resulting in ATP synthesis which takes place in the mitochondria of cells. Mitochondria are known as the source of the largest quantity of energy needed for cellular development and growth and healthy metabolism. This is why Ubiquinol is now considered one of the most important antioxidants for the cellular system.

A large variety of studies involving this nutrient have been conducted. The neuronal benefits shown through clinical trials include reducing the symptoms of Parkinson’s disease, memory loss, mild cognitive impairment, Alzheimer’s disease, Huntington’s disease, depression and dementia.Ubiquinol is recommended as a dietary supplement in a dose of one capsule daily or as suggested by a healthcare professional. It is highly recommended for individuals under statin drugs (used to reduce cholesterol levels).

3) Is Ubiquinol Right for You?

Ubiquinol is a nutritional supplement based on a single active ingredient, Ubiquinol, the reduced form of the Coenzyme Q10 researched for its powerful antioxidant qualities. Ubiquinol is a lipophilic antioxidant also important for the regeneration of other antioxidants such as ascorbate (Vitamin C) and Tocopherol (Vitamin E).

Ubiquinol has been shown to have benefits on multiple levels such as energy production (it is found in the mitochondria, the primary source of cellular energy), cardiovascular disorders, neuronal health, oral health (gums, salivary glands, tongue, and lips) and renal health. Some of its most significant benefits of the nervous system are in the treatment of depression symptoms, mild cognitive impairment, memory loss, Alzheimer’s and Parkinson’s disease. Ubiquinol is considered safe, and only some mild side-effects have been reported. These potential side effects may be nausea, gastrointestinal upset and diarrhea, skin rashes and loss of appetite.

The suggested usage is one capsule daily for adults over 25 years. This supplement is especially recommended for those taking statin drugs (prescribed to reduce the cholesterol quantity produced by the liver).
Ubiquinol is advertised as a 100% natural, high absorption formula generated by a reputable company under current quality and standard practices. There are no testimonials to support the formula’s Effectiveness.

5) What You Need to Know Before Taking Ubiquinol

6) How Much Does Ubiquinol Cost?

Ubiquinol is available in bottles of 30 and 90 capsules. The price for a month’s supply is around $20.There is no mentioning about a money-back guarantee on the official product’s site.
The product is also available for sale online. Some discounts are offered by retailers under some constraints (free shipping under certain conditions or 5% off if choosing monthly auto shipping, etc.by the large number of). The manufacturer also sells directly to consumers.

The formula is not recommended for people under 25 years old as CoQ10 should be absorbed naturally by the body. Mild side effects of CoQ10 intakes commonly reported are nausea, headache, gastrointestinal upset or loss of appetite, but it is considered a safe supplement. The recommended daily capsule of Ubiquinol is one capsule.

8) Our Final Take On Ubiquinol

Ubiquinol is a nutritional supplement advertised as the necessary antioxidant protection for a healthy functioning of several systems and for reducing the negative effects of aging. The formula is not different from those of competitors’ and is not an FDA approved supplement.The formula’s effectivenesshasn’tbeen supported by any online testimonial or scientific research. Also, conclusive reviews from consumers are missing. The research made on the active ingredient is the only thing supporting the advertised benefits of Dr. Mercola’ s formula. This is why, in case of insufficiently researched or unapproved supplements, we always recommended you to consult a healthcare professional before starting using them. 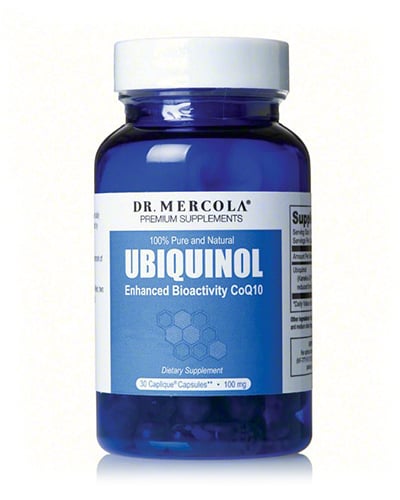 clear
Q:
What does Ubiquinol contain?
A:

Q:
What is Ubiquinol?
A:

Ubiquinol is a nutritional supplement offered for the support of the general health, while also exhibiting powerful antioxidant properties. The formula is manufactured by Dr. Mercola and is based on the fully reduced form of the Coenzyme Q10, for which the following benefits have been listed and investigated: maintenance/improvement of the neuronal system, effective in the treatment of depression and Parkinson's disease, support for the immune system, increased energy levels, healthy circulatory system, etc. Ubiquinol is developed by Dr. Joseph Mercola, a well-known physician in the field of nutritional supplements and traditional medicine.

Ubiquinol is an antioxidant formula designed to help with multiple ailments affecting different systems or functions (circulatory, immune, nervous or muscular system). The product's effectiveness at the great number of clinical tests and the research of Ubiquinol as a form of CoQ10. It has been shown to be useful to some extent in a significant number of disorders and conditions, but further research is still needed to conclude on the reported benefits. It is marketed as a superior quality formula containing the only CoQ10 of the highest purity. Unfortunately, in the absence of any actual evidence, this remains a mere marketing claim.

In the case of unapproved supplements such as this, it is always recommended to inform a healthcare professional about your intention to start taking it.

This product (and many others from Mercola) is a must if your trying to control your cholesterol (at least for me). I have been taking Dr Mercola supplements for many years now. I have not found a supplement that was not top notch to the OTHER brands. I know this is an honest company and they go out of their way to make a customer happy. I will give this Brand 5 stars all the way. I don’t know who is giving the low ratings, but compared to SHELF brands, this brand is more then a FIVE STAR BRAND.

This product really works. Since I started taking it I am feeling more energized and focused on daily activities. I would definitely recommend it for everyone who is feeling tired all the time and wants to be more active!

I have been using the formula for 15 days now and I have noticed some improvement in my learning capacity. I seem to think clearer and to be more alert at the same time.