Antarctic Krill Oil is a dietary supplement advertised to support the overall health through a synergistic combination of essential Omega-3 fatty acids.The formula is offered by Dr. Joseph Mercola, a licensed osteopathic physician specialized in developing nutritional supplements. He funds a website designed to inform people of the most effective nutritional supplements available, as well as to point out the harmful effects resulted from over-advertised and under-performing dietary supplements.

The most important advantage of this formula is its composition which allows for a better absorption and is more resistant to rancidity. Also the percentage of Omega-3 fats in this product is claimed to be three times higher than the one found in similar products.

Antarctic Krill Oil is claimed to help maintain a healthy heart, optimal brain function and development, cholesterol health. It is a natural formula which boosts the immune system, supports memory and learning, a healthy liver function and an optimal skin health. The formula is addressed to adults but there is also a children version available called Kids’ Krill Oil.

1) Antarctic Krill Oil at a Glance

Mercola Antarctic Krill Oil is a nutritional supplement which combines the essential Omega-3 fatty acids EPA and DHA and antioxidants.

DHA is currently used mostly as a dietary supplement for pregnant and breastfeeding women. It is considered an essential nutrient for a healthy development in fetuses and infants. Clinical trials have shown contradictory results of DHA supplements effectiveness. Moreover, DHA extracted from fish can be contaminated with heavy metal and other toxins which can be dangerous for pregnant women.
Another benefit of keeping levels of DHA and EPA within normal limits may be in preventing depression, Parkinson’s and Alzheimer’s disease. Studies suggest Omega-3 fatty acids may also be helpful in the treatment of ADHD (attention deficit hyperactivity disorder) symptoms.

2) What Are Antarctic Krill Oil Ingredients?

Antarctic Krill Oil nutritional supplement synergistically combines essential Omega-3 fatty acids and antioxidants. This formula is marketed as new and improved, and a 100% pure and highly effective product. It offers multi-system health benefits in an easier to absorb form (krill oil) compared with classic formulations based in fish-oil.

Antarctic Krill Oil is not a clinically researched supplement although each of its active ingredients has been the subject of scientific research. It has been found that the combination of Omega-3 fatty acids EPA and DHA has proven to be more efficient than each of these nutrients used separately. Research has linked EPA and DHA deficiencies with disorders like depression, anxiety, Alzheimer’s or schizophrenia.

Astaxanthin is the pigment which gives the reddish color of some seafood species. It belongs to the carotenoids group and is considered a much more potent antioxidant than other known nutrients used for the same purpose. It has been researched for its potential support in the treatment of disorders like Alzheimer’s disease, Parkinson’s disease, and macular degeneration. More studies are needed to determine the Effectiveness of this substance for these uses.

The suggested use for Dr. Mercola Antarctic Krill is two capsules per day preferably taken with the first meal. Its use is forbidden for people allergic to shellfish, have a blood coagulation condition or under anticoagulant medication (Warfarin).

There are testimonials posted online about Antarctic Krill Oil. What is being stated includes the following:

6) How Much Does Antarctic Krill Oil Cost?

Antarctic Krill Oil is available in bottles of 60 and 180 capsules. The price is moderate–up to $25 for a month’s supply–but it is higher than that of similar products sold by other manufacturers. There is no mentioning of a money-back guarantee or free trial option, but retailers offer some discounts and price promotions under certain conditions.
The product is available for sale on the manufacturer’s website and other online retailers.

7) How to Take Antarctic Krill Oil

This formula is advertised as 100% pure, and as having a higher percentage of Omega-3 fats and Astaxanthin antioxidants delivered. It is also claimed to be free from mercury contamination (frequent in the case of fatty acids extracted from fish) or other pollutants.For optimum results, the manufacturer recommends taking 2 capsules per day with the first meal. People allergic to shellfish, have blood coagulation conditions or are taking anticoagulants such as Warfarin should not use this product.

Antarctic Krill Oil is a dietary supplement offered as a support for different ailment and for the maintenance of general health. It is a formula based on Omega-3 fatty acids and antioxidants.The product is claimed to be superior to similar supplements offered by competitors due to its increased percentage of active ingredients. The nutrients are clinically researched but there is still insufficient evidence of their effectiveness in some of the ailment claims. Studies also revealed contradictory results.

This formula is not FDA approved and has not itself been involved in any clinical research. The claimed benefits are only supported by consumers’ reviews. It has received positive reviews when used in the treatment of ADHD symptoms.

Antarctic Krill Oil should only be used only after informing a healthcare professional and it is not recommended for individuals with allergies to shellfish or blood coagulation conditions. 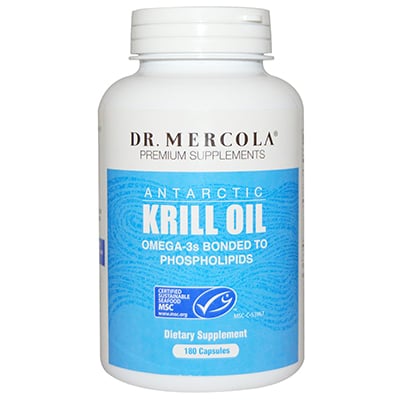 clear
Q:
What are the core ingredients in Antarctic Krill Oil?
A:

Q:
What is Antarctic Krill Oil supplement?
A:

Antarctic Krill Oil is a dietary supplement created to promote overall health and to support learning and memory, heart health, immune system and function and skin health. The formula is offered by Dr. Mercola, and is a synergistic combination of essential Omega-3 fatty acids and antioxidants Omega-3's EPA and DHA are scientifically proven to benefit cognitive function and prevent oxidative stress damage that may lead to Alzheimer's, stroke or Parkinson's disease. Antarctic Krill Oil is claimed to be 100% pure and free of trans fat.

Antarctic Krill Oil is a nutritional supplement marketed as a premium product. The ingredients are Omega-3 fatty essential acids EPA and DHA and antioxidants claimed to be in higher quantities than those found in competitor's products. However, no evidence that this formula has been involved in any clinical trial is provided.

The effectiveness of this formula is supported only by the good reputation of the products commercialized under Dr. Mercola brand and several consumer reviews. It is hence likely that the product will prove effective for some users.

I bought this supplement even though the price was a little higher than the products offered by the competition. I have not noticed any improvement of my memory yet and I’ve been taking it for 2 weeks now. I hope it will see some changes by the time I’ll finish the whole bottle

Matt, on a cellular level it takes 90 days. To see an immediate result is unrealistic.