Don’t Pause for Women Review – Is it Effective?

Don’t Pause for Women is a multivitamin supplement offered by the Antiaging Institute of California. The company operates in California, U.S.A. since the year 2000 and has dedicated its efforts to preventing and postponing the effects of the aging process. They offer a wide range of products in the anti-aging area that include dietary supplements, cosmetic products, weight-loss products, and other kinds of products that support overall health and youth.

Don’t Pause for Women is specially designed for women that are going through perimenopause or menopause and claims to offer real support in dealing with the multitude of problems that arise during these times of change. Menopause occurs usually around the age of 50 years and is considered to start when the menstrual cycle has been absent for a period of over a year. Perimenopause is the time of a woman’s life that precedes menopause and when the first signs of hormonal changes appear; it usually occurs around the age of 40. These are natural processes that are normal in the aging process of all healthy women; there are however cases when the symptoms of perimenopause or menopause become more severe and make everyday living hard. Don’t Pause for Women claims to relieve 45 different symptoms of menopause and ensure a healthier and happier life.

Don’t Pause for Women is a multivitamin supplement that addresses women entering perimenopause and menopause. The product is claimed to relieve 45 of the most common symptoms and to allow women to lead a normal healthy life after the age of 50. The supplement contains a mixture of herbal extracts, minerals, and vitamins claimed to relieve common symptoms like hot flashes, night sweats, headaches, and more severe ones like depression, hair loss, blood sugar fluctuations, and many more. The formulation contains Pomegranate extract that some preliminary testing has suggested has positive effects on the cardiovascular system like reducing heart disease risk factors and improving arterial tension.

The product also contains purified soy isoflavones, compounds found to relieve menopause symptoms like night sweats and hot flashes. In Asia only 10 to 20% of all women suffer from hot flashes compared to 70%-80% in the USA; it is believed that the dietary intake of soy isoflavones in Asian diet is responsible for this huge difference. Also, some studies suggest that soy isonoflavones are likely to offer breast cancer protection, especially in post-menopausal women. Other studies on Asian populations that consume large amounts of soy foods seem to suggest much lower rates of osteoporosis than in Caucasian populations.

2) Ingredients of Don’t Pause for Women

3) What Does Don’t Pause for Women Do?

Advertised as a product specifically designed for women going through menopause, Don’t Pause is composed of a series of ingredients known for their individual properties. These ingredients vary from herbs to Vitamin D-3. One of its herbal components is Green tea extract. Evidence has shown that Green tea is primarily consumed in China and some countries in the Middle East and North Africa. Green tea based products are utilized as potent antioxidants as well as tumor prevention. Even though long-term research is required before determining the optimal dosage of green tea extract which should provide benefits, this ingredient can also be used for its antiviral effects, improvement of cardiovascular health, blood thinning properties and weight loss qualities. There are some side-effects related to consumption of Green tea based products, such as liver troubles, abdominal pains or jaundice.

Another component of Don’t Pause for women is DHEA. DHEA is short for dehydroepiandrosterone, a hormone secreted by the human body which breaks down into testosterone in men and estrogen in women. For years it has been believed that the DHEA hormone might be useful regarding brain functions, however, more than enough studies have found conclusive evidence to demonstrate that DHEA does not have any effect on the human mind, memory, and other functions. Mostly, it can be regarded as a hormone influencing mood swings, the female and male reproductive system, andropause and menopause and other symptoms related to them. Side effects include hair loss, acne, and stomach upset.

There are some online testimonials about Don’t Pause. What is being reported includes the following:

6) How Much Does Don’t Pause for Women Cost?

Don’t Pause is an average priced product which can be bought either from manufacturer website or other online or offline retailers. Due to its good customer testimonials, this remedy should prove better than similar products. When bought in larger quantities, discounts and promotions are offered.

Don’t Pause for Women is offered in the form of tablets, and each bottle contains 60 capsules. The recommended dosage is one a day for peri-menopause, or two caps for menopause, taken after meals (breakfast and/or lunch).

8) Our Verdict on Don’t Pause for Women

Don’t Pause for Women is a multivitamin supplement that addresses women over the age of 40 or those that have started to show the early signs of menopause. The product claims to relieve up to 45 of the most common symptoms that occur during this period and contains several ingredients that have been proven to be effective in treating some of those symptoms. However, the manufacturer makes little effort to provide real evidence in supporting the claims around this particular formulation. Users should also consider the fact that some of its ingredients make cause severe side effects. To conclude, Don’t Pause for Women may be an effective product, but it should only be taken if recommended by a professional.

You can take Don’t Pause for Women together with a multivitamin for women like Women’s One. 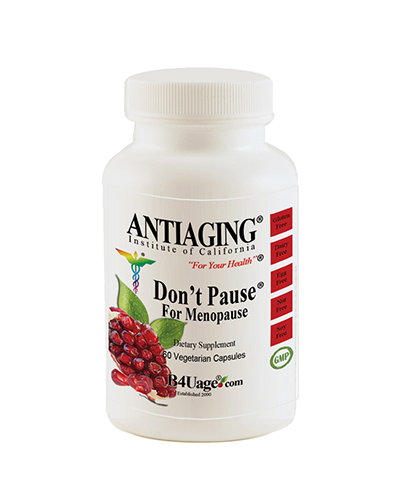 clear
Q:
What does Don't Pause for Women contain?
A:

Q:
Don't Pause for Women is all about what?
A:

Don't Pause for Women is advertised to be a supplement that aims to help with symptoms associated with menopause. The company that produces this formula is called Antiaging Institute of California and is located in Beverly Hills, United States. Don't Pause for Women is a dietary supplement that uses ingredients such as Chromium, Black Cohosh extract, DHEA or Green Tea extract in order to aid women in dealing with sleep disturbances, mood swings, night sweats or other menopause related symptoms.

Q:
Does Don't Pause for Women work?
A:

Promoted as a remedy for menopausal symptoms in women, Don't Pause contains a series of ingredients that have proven reliable for some people in this particular combination. There are mostly herb extracts in combination with DHEA and Vitamin D-3 as well as Selenium and Chromium. There are a few side-effects related to the consumption of this product, and it is advised for people to interrupt the treatment if any of these occur immediately. Because this product is only a natural remedy, it should be balanced with a healthy diet and a normal sleep schedule to obtain beneficial results.