Cogni-Q is a nutraceutical designed to support cognitive function with particular benefits on memory. The supplement is produced by Quality of Life, a company with a history of over 15 years in the field. The manufacturer prides itself with several awarded formulations such as AHCC-a patented medicinal mushroom extract, Oligonol- an innovative formula with anti-aging benefits, or VitaPQQ- the first dietary formula to feature the vitamin PQQ designed to preserve mitochondrial function. Quality of Life also claims to be dedicated to providing formulas that contain meaningful dosages of key ingredients, an essential condition of high-potency products.

Cogni-Q is based on a single active ingredient which is a patented extract of the Korean plant Angelica. The plant-derived compound is known as INM-176 and is a clinically researched substance. The manufacturer claims this chemical has been shown in a published double-blind, placebo-controlled trial to support cognitive agility in 80 subjects suffering from mild memory problems associated with aging.

INM-176 is a standardized ethanolic extract of the plant Angelica gigas Nakai used as a traditional Korean remedy as a general tonic, to improve gynecological health, and support the immune and cardiovascular systems. Currently, the plant is being investigated as an anti-cancerous treatment, but its effectiveness has not yet been confirmed by clinical trials.

INM-176 has been primarily investigated as a neuroprotective agent in patients suffering from Alzheimer’s and other age-related cognitive problems. An animal study concluded that due to its anti-inflammatory action, the compound can be a potent neuroprotective and cognition ameliorating agent. Human trials have also shown positive outcomes. One of these studies is mentioned by the manufacturer on the official page of Cogni-Q. The subjects who were administered with the INM-176 compound had a significant decrease in total error score in the Alzheimer’s Disease Assessment Scale-Cognitive section as opposed to those who were administered with placebo. The INM-176 group was also favored by the mean changes in instrumental activities of daily living (IADL) and geriatric depression scale (GDS) as compared to the placebo group. Another study involving 92 participants (elder individuals suffering from a cognitive impairment) showed similar results.

INM-176 is an herbal extract composed of Decursin and Decursinol. The chemical has been clinically researched for potential benefits in patients suffering from ADD, ADHD, or age-related memory problems. Human studies seem to support the benefits of INM-176 in the cognitive area. One study involving 30 patients diagnosed with ADHD showed significant changes in attention, impulsivity, hyperactivity, and executive and cognitive functions. Another human study involving elderly subjects who suffered from cognitive impairment has managed to reveal improvements of memory and other cognitive functions.

Researchers discovered that INM-176 has the ability to inhibit an enzyme that breaks down Acetylcholine. The name of this enzyme is acetylcholinesterase. By breaking down this neurotransmitter, its concentration in the brain decreases, leading to various cognitive issues, memory decline being only one of the numerous problems associated with Acetylcholine deficit. More so, INM-176 is able to protect the brain against the damage of free radicals, particularly from the oxidizing peptide beta-amyloid (Abeta).

Cogni-Q is available at multiple online stores, including on the official site of the manufacturer. The standard price is $34.95, and this is the cost for a month supply. At this time the formula is on sale at some partners, so you can buy it cheaper from the Quality of Life website. No other offers seem to be available at this time. The manufacturer’s refund policy is restrictive in the sense that only unopened products are accepted and no later than 30 days after purchase. The policy applies solely to the products ordered directly from the manufacturer’s website.

Scientists observed that INM-176 works by increasing Acetylcholine levels in the brain. AC is an important neurotransmitter involved in brain cell signaling. It is why without adequate amounts of AC in the brain, neuronal communication becomes impaired leading to memory problems and communication issues. Age-related memory decline has also been associated with AC decline, so INM-176’s ability to help maintain Acetylcholine levels in the brain is essential for preventing memory problems.

Cogni-Q looks like a high-quality formula because it is manufactured by an experience and awarded manufacturer, and it contains a single patented and clinically researched key-ingredient. However, the product does not benefit of the consumers support at this time. A reduced number of consumer testimonials are available for online consulting. The reviews are mixed. However, the existing clinical evidence seems to support INM-176’s antioxidant and neuroprotective benefits. More research is required in order to reach a definitive conclusion, as the number and scale of clinical trials conducted so far are reduced. 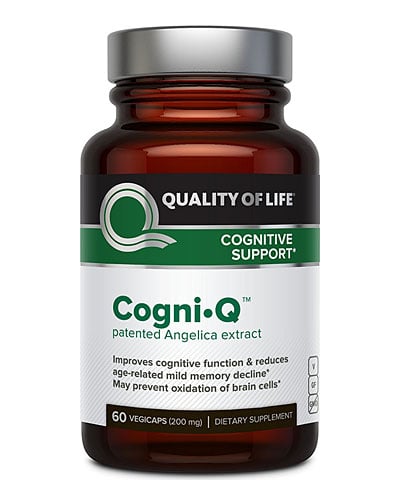 clear
Q:
What are the active ingrediens in Cogni-Q?
A:

Cogni Q is offered by Quality of Life, a U.S. based company, as a breakthrough nutraceutical for cognitive health. The core ingredient is an extract of the Angelica gigas Nakai (root) whose key active ingredient known as INM-176 possesses potent antioxidant properties that protect the brain from aging processes. Additionally, several animal studies seem to indicate that it may increase brain levels of Acetylcholine, the neurotransmitter necessary for memory.

Cogni-Q relies on the potential benefits of a compound that has gained a lot of attention in the last few years. The main concern is that there are not enough clinical trials to prove the active ingredient's safety and potency, particularly on long-term. There are only a few testimonials about this formula at this time and even these few reviews are not very favorable. Consumers mostly complain about the lack of noticed improvements after using the supplement. The official site does not provide any consumer testimonials.

However Cogni-Q has been used in at least one human clinical trial involving 20 participants. The formula was well tolerated and no side-effects have been reported by any of the subjects. The study investigated the anti-cancerous properties of Decursin and Decursinol Angelate in both rodents and humans, with positive outcomes in both cases.