Synagen IQ Review – Is it Effective?

Synagen IQ Core Focus is a brain nutritional supplement that is intended to increase your focus, memory and energy levels. While the obvious sign of cognitive impairment is memory loss, the symptoms may also include attention difficulties, poor concentration, inability to retain knowledge, low energy and “brain fog” in general. With advancing age, it is very common for many of these symptoms to become worse, and no one can deny the scientific fact that the brain starts to degenerate after 30 years of age because of nutritionally poor diet and an unhealthy lifestyle. Synagen IQ is one of many products that claim to improve cognitive function in multiple ways. It is designed and manufactured by “Phenom Health” who claims that their product especially targets the individuals above 30 years of age and can reverse the signs of cognitive impairment, enhance both long-term and short-term memory and restore the energy levels in just one pill a day.

Synagen IQ is a super mixture of natural ingredients that work together to improve the optimal function of the brain. While some impairment of cognitive function is expected to occur with age, other aspects of life such as poor diet, stress and lack of exercise can also cause reversible damage. If the brain does not receive enough “fuel,” (oxygen and nutrients) it becomes low in energy which in turn causes an inability to learn and retain knowledge, general lack of motivation and memory loss. Instead of focusing on a single aspect of cognitive impairment, nootropics such as Synagen IQ supplement the brain and provide significant benefits over the long term.

This supplement is made from 100% organic and powerful ingredients that have the potential to enhance the cognitive function of the brain, such as:

Bacopa Monnier – which stimulates the production of neurotransmitters.
Alpha-GPC – which increase the level of acetylcholine, which promotes the cognitive functions.
Phosphatidylserine – that helps reduce mental agility, depression and memory loss.
Vinpocetine – that improves blood circulation and thus provides the brain with the oxygen and nutrients.
Tyrosine – that helps to improve the focus, concentration and restores energy levels.

Some of the other potent ingredients used are – GABA, L-theanine, Huperzine A, Vitamin B3, Vitamin B6, and caffeine.

2) What Are Synagen IQ Ingredients?

4) Precautions of Synagen IQ Use

If you suffer from too much energy after taking this Synagen IQ, we recommend taking Gaia Herbs Sound Sleep.

These ingredients in this product have been proven to increase the memory and reduce the senile (age-related) memory loss of men and women of almost all ages. Using this supplement, men and women of early 20s to late 30s have reported a significant increase in their short-term memory where people aged between 40 to 65 years have noticed a dramatic increase in the both.

6) Our Final Take On Synagen IQ

Synagen IQ is for those who want to fight cognitive impairment on multiple levels. It is available at a reasonable price with a 30 days money back guarantee, especially when consumers take benefit of the multi-buy discount offer. It would also be useful to know when users should expect to see results because some nootropics work almost immediately, while others offer long-term benefits. We do not recommend taking this supplement at night because of its caffeine content. Although this supplement is not manufactured to combat with advanced stages of cognitive impairment, it will help slow down the memory decline process in elderly adults. 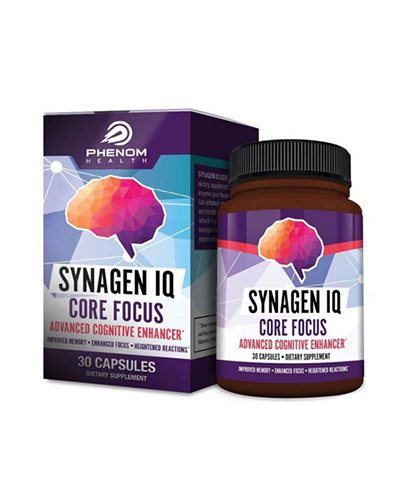