Advertised as an enhancement of the carbohydrate digestion quality, Cataplex GTF helps people maintain normal blood sugar and blood lipid levels, but only in combination with a well-balanced diet for people that already have normal lipid-levels. The company behind this product goes by the name of Standard Process.

The business was established by Dr. Royal Lee in 1929 in Milwaukee. Its creator based its nutritional belief system on the idea that the provenience of an ingredient is of higher importance compared to the quantity used in the supplements. They currently design and distribute approximately three hundred products that are separated into three lines of production that are: MediHerb, Standard Process whole food supplements, and Standard Process Veterinary Formulas. Every one of their products particularly focuses a medical condition or a bodily function by utilizing ingredients with proven properties.

Cataplex GTF contains ingredients that are derived from food sources. For example, the extracts found in the tissues of bovine which offer nutrients and support to corresponding tissues of the human body. Moreover, in comparison to other companies, Standard Process state that their ingredients haven’t been disassociated into isolated compounds, thus the nutrients are delivered in a complete and intact way.

Cataplex GTF represents a product that supports healthy blood sugar levels that are already within normal ranges, thus promoting healthy cholesterol. It contains a series of ingredients such as minerals, vitamins and glandulars like L-cysteine, buckwheat and bovine pancreas extract which offer help to the organism in order to maintain its normal glucose levels.

Another ingredient of Cataplex GTF is chromium whose active compound is chromium III. Although other forms of chromium possess an electric charge that is repelled by the cells and makes the entry into cells of high difficulty, chromium III is easily absorbed by the organism. On the other hand, there are certain studies that consider it to be a “poor choice as nutritional supplement” even though it focuses on treating chrome deficiency. There are some opinions that claim this component as an aid for reducing insulin resistance, specifically in people that have diabetes. A meta-analysis showed that there is no association between insulin or glucose concentration and chromium III.

5) How Much Does Cataplex GTF Cost?

Cataplex GTF can usually be found for purchase both on manufacturer web page as well as other online retailers. For example, because the manufacturer lacks international shipment, people from outside America are obliged to order from other retailers. It comes in bottles containing ninety tablets. Because the normal recommended dosage is of one tablet per day, a bottle is sufficient for three months of treatment. However, for more serious conditions, the treatment may vary. Its price is considered to be affordable by anyone, and when bought in larger quantities, there are usually promotions and discounts offered by some retailers.

There was a study that was conducted in 2009 and found no significant relevance between chromium III and insulin sensitivity and additionally no serum lipids or weight levels were affected by its usage. Even though it might not have effect on healthy people, there usually is positive impact in diabetes. Cataplex GTF is often regarded as safe when used for less than six months, but there are some unwanted side-effects on long-term periods which include headaches, mood changes, impaired thinking and dizziness.

Advertised as a formula particularly chosen to maintain healthy blood lipid and blood sugar levels in the human body, Cataplex GTF contains a series of components with individually known and tested qualities. It proved effective in treating animals or people that suffer from diabetes. On the other hand, there is some research that claims its possible ineffectiveness in healthy people due to its ingredients. Further studies are required in order to consider its positive effects on general levels. Vegans and vegetarians can’t take advantage of this formula because it has animal extracts. All in all, Cataplex GTF represents an complex, economical, and easily absorbable supplement compared to similar others. 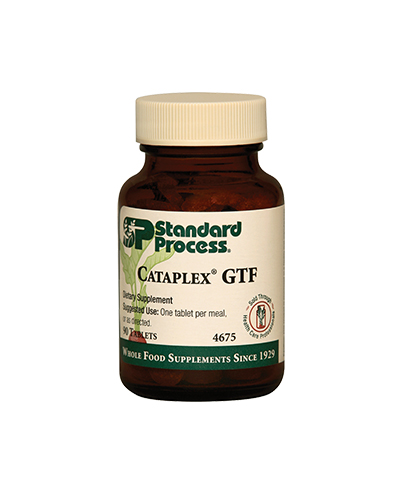 clear
Q:
What are the active ingrediens in Cataplex GTF?
A:

Q:
What is Cataplex GTF supplement?
A:

Cataplex GTF represents a formulation that focuses on maintaining healthy blood lipid and sugar levels for healthy people. However, some research pointed out that there might have no considerable effect in people who are already healthy, but it may have some on those suffering from diabetes. It features a series of ingredients like chromium with known individual properties. The company behind this remedy is called Standard Process and has been on the nutritional market since 1929.

Q:
Does Cataplex GTF work?
A:

Presented as a formulation specifically chosen to keep healthy lipid and blood sugar levels in the organism, Cataplex GTF features a series of ingredients with individually known and tested properties. It has been proven effective in treating people or animals that have diabetes. However, some studies claim it's effectiveness in healthy people because of its ingredients. Further research is required to determine its impact on general levels. Vegetarians and vegans may not take advantage of this formula because it contains animal extracts. Overall, it represents an economical, complex and easily absorbable supplement, in comparison with similar others.

This is a wonderful product. One of my kitties has diabetes. He gets insulin and 3 supplements. (Cataplex GTF is one of them). I
noticed such a difference in his playfulness and attitude since being on this. I highly recommend it.

I began taking this in conjunction with Catalyn 2140 & Cholaplex. Within a few days I’m now having violent stomach spasms & diarreah. I feel it’s due to these soups. Feedback, please?

According to Standard Process, you may experience some side effects as you acclimate to this Cataplex GTF, and diarrhea is one of these potential side effects. Our recommendation is to lower your dosage and stop combining Cataplex GFT with Catalyn 2140 and Cholaplex. If the side effects do not improve in a few days, if they worsen, or if you experience any severe side effects, discontinue use and contact your physician.