Buried Treasure Neuro Nectar is formulated to increase energy and awareness, improve memory, enhance mental clarity and ensure peak mental performance. The formula is manufactured by a company which activates in the health food industry since 1969 called Lifeline Foods. The nutraceutical division called Buried Treasure was founded in 1996 and specializes in the manufacturing of liquid minerals, vitamins and specialty nutrient formulas.
Buried Treasure is a line of optimum potency synergistic liquid formulas which contain no fillers, binders or excipients. The line includes products specifically designed for children, men and women needs, as well as condition-targeted products.Buried Treasure Neuro Nectar is recommended for teenagers and active adults searching for the mental edge required to complete all tasks or wishing to experience optimum brain power and memory enhancement. Particularly, the supplement may be a good choice for busy professionals, students, and in fact anyone who wishes to experience optimum brain performance and memory.

Buried Treasure Neuro Nectar is a combination of vitamins, herbs and neuro-nutrients. The product is free of dairy, wheat, gluten and yeast. Gotu Kola, one of the herbal ingredients of the formula, is an herbal ingredient used since thousands of years ago in China, India and Indonesia. Gotu Kola is especially useful in decreasing inflammation and blood pressure in the veins, as well as increasing peripheral circulation. Recent research has discovered that the plant contains triterpenoids, chemicals which seem to decrease anxiety and increase mental function in mice.

Promoted as being a mixture of herbs, vitamins, and other neuro-nutrients, Buried Treasure Neuro Nectar is claimed as wheat, gluten, dairy, and yeast free. It was specifically designed to fulfill the cognitive requirements for teenagers and adults during periods of mental stress or enhanced mental activities.

Within its most essential components, there is Gotu Kola. Recent research revealed that this plant features triterpenoids which are some chemicals that seem to decrease anxiety and enhance mental function. On the other hand, the studies that have been conducted in this area were made on mice, but there are high chances for the same impact on people. Additionally, plenty of human studies is currently concentration on its concentration and memory enhancement properties. Those are directly linked to the improvement of peripheral circulation. Throughout the usage of Gotu Kola based supplements, some side-effects have been reported and include itching, drowsiness, and nausea.

Another reliable ingredient featured in this formula is Phosphatidylserine which is, in fact, a phospholipid that can be found in most human cells. Research suggests that it plays a role in the maintenance of brain cellular functioning because of its ability to aid in sustaining the myelin sheath’s health. Furthermore, it may enhance mental focus, short-term memory, concentration, learning, and mood coordination. Potential harmful effects are stomach upset and insomnia.

Although there are is no accurate information about potential unwanted effects that may appear throughout the usage of this product, because of its components, some of the above mentioned may occur. The daily recommended dose is two tablespoons.

4) What Buried Treasure Neuro Nectar Does?

6) How Much Does Buried Treasure Neuro Nectar Cost?

Found in bottles that hold 473 ml of liquid, the product may be purchased directly from the manufacturer website. However, because there is no international shipping policy, for those who live outside the United States, there are a series of online distributors that provide it. Overall, its price is viewed as moderate, and if it is bought in higher quantities, some discounts or promotions may be offered which lowers its price and makes it more affordable.

There is no mention of a money-back guarantee. Thus people should be sure before purchasing this supplement. It is advised to shake it before utilization, and the daily suggested amount is two tablespoons. For obtaining a better taste, the supplement may be mixed with juice.

Numerous human studies are currently focusing on Gotu Kola’s benefits in improving mental functions such as concentration and memory, as a result of increased peripheral circulation. Reports of stomach upset, nausea, drowsiness and itching drowsiness from using Gotu Kola exist. Phosphatidylserine (PS) is a phospholipid found in most human cells. It seems to play an important role in maintaining functional brain cells, where it is believed to maintain health of the myelin sheaths, the protective covering around nerve fibers.Research, although limited, indicates that Phosphatidylserine can improve short-term memory, mental focus, concentration, mood, coordination and learning. Insomnia and stomach upset may be sometimes experienced as a result of using PS. There is a very limited number of reviews, making it impossible to generalize and formulate a conclusion on the formula’s effectiveness.The recommended daily dosage of Buried Treasure Neuro Nectar is 2 tablespoons daily, preferably with meals.

Buried Treasure Neuro Nectar is a liquid formulation designed to support energy, alertness, memory and mental clarity. Individually, the main ingredients have been used and some even scientifically proven to positively impact brain functions. The large number of products with similar benefit claims makes it very difficult for consumers to choose which product is right for them.

Other consumer reviews and testimonials may help, in absence of any other evidence. However the supplement received a limited number of reviews, which makes it hard for us to fairly assess the formula’s effectiveness. This is why we advise you to ask the opinion of a healthcare provider before use. 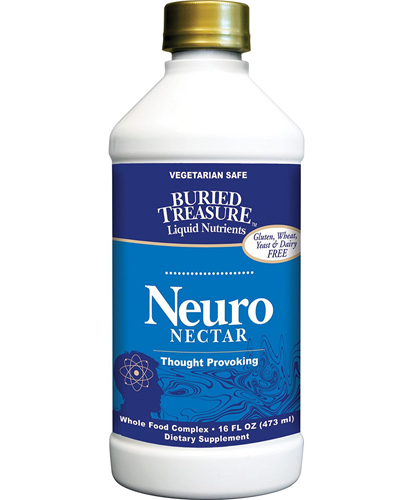 clear
Q:
What does Buried Treasure Neuro Nectar contain?
A:

Q:
What is Buried Treasure Neuro Nectar supplement?
A:

Buried Treasure Neuro Nectar represents a natural remedy designed to assist with proper brain function, particularly helping improve memory and learning in mature adults. The company which manufactures the supplement is called Life Line, whereas the supplement is part of the Buried treasure brand. The formula targets adults as well as teenagers and promises to optimize the mental functioning, thus bettering mental processes. It contains a variety of ingredients that range from vitamins (the b complex) to herbal extracts (Gotu Kola, Ginkgo Biloba). Most of its components are known for their properties and are frequently included in dietary supplements.

Advertised as a remedy meant to enhance cognitive functions such as memory, concentration, focus, learning abilities, and clarity, Buried Treasure Neuro Nectar is composed of a wide array of ingredients that vary from herbal extracts to vitamins and minerals. It is important to check the label of the product before usage properly, and people who have known allergies to certain ingredients should consult a personal healthcare provider before beginning the treatment. As with most natural remedies, pregnant or nursing women should ask the advice of a doctor, so the baby is not harmed. Overall, the supplement is meant for adult utilization and promises to ease the daily mental chores.

I really like this product! Makes my brain awesome!

I used this for my fifteen year old daughter! I like it

What are the fruits used in neura necter as I am allergic to citrus. My experience with this product is encouraging however I need to know if citrus is in this product
Thank you Margaret