Brain Power Review – 8 Things You May Not Know

Brain Power is a nootropic supplement which promises to support memory and concentration, while reducing stress levels and providing other mental benefits. It’s sold by Aviano Botanicals, located in Carrollton, Texas. Their products appear to be made in United States labs with FDA and GMP certifications, which usually implies that supplements have high quality and purity. Aviano Botanicals is best known for their large amounts of essential oils, but they do sell multiple supplements as well. The company has been around long enough to get a lot of fans and products out there.

Brain Power has 8 active ingredients, including ginkgo biloba, St. John’s Wort, and bacopa monnieri. Bacopa monnieri is also known as brahmi, thyme leafed gratiola, and Indian pennywort. The nootropic herb grows best in marshy or damp conditions. Some people even use it as an aquarium decoration. The herb has been used in traditional medicine for epilepsy, asthma, ulcers, tumors, enlarged spleen, inflammations, anemia, gastroenteritis, and more. While not all positive effects have been proven through scientific study, bacopa does have potential to help with a lot of problems.

Capsules contain 50 mg Ginkgoxine, a ginkgo biloba extract, and 727 mg of a proprietary blend. This blend has 7 ingredients including Acetyl-L-Carnitine, vinpocetine, and L-glutamine. Acetyl-L-Carnitine (ALCAR) is a nootropic substance involved with energy, metabolism, and the mitochondria in general. It’s found in the human body and some foods. It goes well with some antioxidants like Alpha Lipoic Acid (ALA) plus choline and caffeine. ALCAR’s energy boosts can be combined with proper diet and exercise for effective weight loss. It has a stimulant effect, but isn’t a stimulant, so it doesn’t have any of their potential adverse effects. There are other forms of L-Carnitine, but this one is primary for enhancing cognitive ability and energy. This supplement does not have choline or ALA.

The periwinkle plant was once used in traditional medicine to reduce headaches, and its derivatives like vinpocetine might be able to do the same. Vinpocetine can increase blood flow in the brain without increasing pressure. It may even reduce blood pressure by small amounts. Like an amino acid, it’s demonstrably effective at penetrating the blood-brain barrier. It’s meant to enhance cognition and some people do report that it’s effective at doing this. The most common dose in scientific research is 15 to 30 mg daily, with some studies going up to 60 mg (20 mg with each meal). Brain Power doesn’t list how much is in its formula, however.

4) What Brain Power Does?

5) Precautions of Brain Power Use

The label says to take just one a day, and no more than two unless your doctor says so. For most people, this will therefore be a two month supply, which is excellent. The price is generally average, but varies depending on a couple of things. The MSRP (manufacturer’s suggested retail price) is above average without being overly crazy. If you get can get your bottle for less than the MSRP, or there’s a sale, the price will often be good. If you’re lucky, you might be able to get this for a below average price. Brain Power can have a great price, but it’s not guaranteed to be inexpensive.

Side effects from bacopa are rare. But if they do appear, it tends to be nausea more than anything else. Taking supplements with food can offset the risk of side effects, and it’s very much recommended that you use this supplement during mealtimes. Most professionals recommend taking it immediately after meals. Bacopa seems to work in people of all ages, although it’s usually studied in the elderly. The most common dose is 300 mg a day as long the extract is of high quality. The active compound (bacoside content) needs to be more than half of the extract. Aviano Botanicals doesn’t list the amount of each ingredient in its proprietary formula, but does say that the bacopa contains at least 20% bacosides.

8) Our Final Take On Brain Power

It’s always hard to figure out if a formula is effective when the amounts of ingredients aren’t listed. We know the proprietary blend is 727 mg but there isn’t any more information. Everything should be balanced appropriately to have a decent product, and there isn’t a method of independent evaluation available. Based on reviews and testimonials, though, people agree that Brain Power works. It doesn’t do the same things for everything, but it looks to be safe and effective. If you want anything along the lines of what Aviano Botanicals promises, you’ll probably enjoy Brain Power. 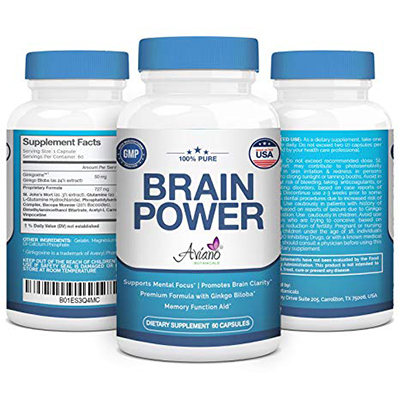 This seems to absolutely make a difference. Hundreds of people have given positive reviews and testimonials. Those who purchase Brain Power have almost all positive things to say about the supplement. There is always a small percentage of people who don't see noticeable effects, when it comes to dietary supplements, because of individual biochemistry. Anyone looking for a nootropic supplement to boost their mental performance, and want a starting point, may find that Brain Power is a good option.