Biogreen Labs Memory & Focus is designed as an everyday boost for your brain. The formula is marketed as safe for daily used and highly effective due to its potent ingredients proven effective by traditional medicine for centuries.

Unfortunately the first problem with this supplement is that we could not find an official site of its manufacturer, Biogreen Labs. The online environment is also not rich in information when it comes to this company, so we have no details regarding their history, technologies used, origin of active ingredients, and other information users usually want to know before purchasing such a product.

Biogreen Labs Memory & Focus is advertised as a 100% natural supplement, free of additives, fillers, and preservatives. The main benefits include besides its memory boosting effects, an increase in energy and stamina and reduction of stress levels.
The formula is claimed as produced in the USA, in a certified facility (what certification is not revealed). It also seems to be backed up by a 100% money back guarantee.

The formula features many popular herbal ingredients with known benefits on cognition on the overall and memory in particular. Ginkgo Biloba is one of them, and this is one of the most researched ingredients at this time. Scientists believe that its antioxidant and blood thinning properties are the main reasons why the plant is so effective in helping with so many health issues. At this time, Ginkgo Biloba based supplements and drugs are used to treat mood disorders (anxiety, depression, etc.), memory related conditions (dementia, Alzheimer’s disease), PMS symptoms, dizziness and headaches, vision problems, or sexual dysfunctions.

Phosphatidylserine is also very a very popular supplement, The substance also naturally occurs in the body, and is located in the walls of human cells, including brain cells. Its main function is to facilitate communication between cells, so when Phosphatidylserine levels decrease, problems like poor memory appear.

N-Acetyl-L Carnitine is a more effective form of the amino-acid L-Carnitine responsible for transforming fat into energy. The supplement is often used to boost mental energy as well, which will further result in enhanced focus abilities and prolonged mental effort improving brain’s performance on the overall. ALCAR, as it is also known is also a precursor of Acetylcholine, a chief neurotransmitter closely related to memory and mood.

3) Is Biogreen Labs Memory & Focus Right for You?

The effectiveness of this formula as a whole is not proven scientifically.
The formula is said to owe its memory enhancing properties to a blend of potent herbs shown to be effective in this area.

Ginkgo Biloba is one of these herbs, and the first ingredient listed in the ingredient list. Ginkgo Biloba is actually one of the oldest surviving tree species on earth. The main benefits associated with the use of Ginkgo Biloba supplements are: enhanced memory, concentration, and other mental abilities, improved vision, and better blood circulation. The plant’s ability to increase oxygen flow in the blood is probably why it is such a potent cognitive enhancer. When the amount of oxygen reaching the brain is optimal the organ is able to function at maximum capacity. Ginkgo Biloba is used also in the treatment of dementia, Alzheimer’s disease, and other neurodegenerative conditions usually associated with memory impairment. A major risk when using this plant it bleeding (due to the plant’s blood thinning properties), so people already under medication, those with increased risks of bleeding and people undergoing surgeries are advised to refrain from taking any Ginkgo Biloba based supplements.

Phosphatidylserine, the second listed ingredient is also a plant based chemical. It is also a naturally occurring substance present in cell membranes where it facilitates communication between cells and allows the nutrients to enter the cells. Brain cells are known to contain large amounts of Phosphatidylserine which unfortunately was observed to decrease with age. Scientists believe that by replenishing the levels of this chemical in the brain, the connections between neurons can be restored and maintained resulting in a better memory.

The formula is currently sold by several online retailers for various prices. On Amazon.com the product is currently on sale and can be purchased for only $23.77. On this retailer’s site we can also see that the standard price of Biogreen Labs Memory & Focus $70. One bottle provides the necessary month’s supply (30 capsules per bottle). Each retailer has its own shipping policy so be sure to check that out before deciding where to place your order.

L-Glutamine is the most abundant amino acid in the blood stream. It is commonly used in the sports nutrition industry where it is used to increase muscle mass faster and lose weight more efficiently. Its memory boosting benefits are also well-known, as L-Glutamine is an essential neurotransmitter in the brain. The chemical was also shown to help with focus and concentration abilities.

Considering that Biogreen Labs Memory & Focus contains popular brain supplements usually found in such formulations, it appears this is a high-quality brain supplement. There are no additives or fillers in this supplement, but it can contain soy, which is an allergen. The fact that the active ingredients have been tested and scientifically researched is very important. However, this doesn’t prove that the entire formula is effective. We cannot say whether the specific concentrations and combination featured here has the same, or more or less benefits than those of the individual compounds.

The number of reviews from those who tried this product are also insignificant and there’s a certain concern that some of them come from fake accounts specifically created to deceive real consumers into believing that this is an empirically proven effective product . 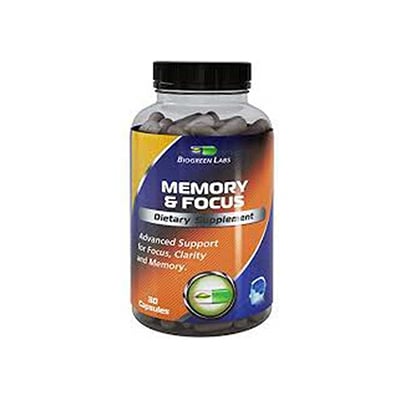 Q:
Biogreen Labs Memory & Focus is all about what?
A:

Biogreen Labs Memory & Focus dietary supplement is a plant and amino-acid combination designed to support healthy memory, boost mental energy and stamina, and reduce stress levels. The manufacturer of this supplement is Biogreen Labs, a company that unfortunately does not have an official web-site at this time.

This supplement is one of the many cognitive enhancers out there, and seems to include pretty common combination of ingredients. The popular Ginkgo Biloba, St. John's Wort, Bacopa Monniera, Vinpocetine, and Huperzine-A are present. All these herbs have been traditionally used as brain tonics, memory enhancers and for many other purposes more or less related to cognitive health. The product also features amino acids like Acetyl-L-Carnitine L-Glutamine and chemicals like Phosphatidylserine and DMAE, substances shown to increase synthesis of important neurotransmitters related to memory, focus, concentration, and alertness.

Unfortunately there is no evidence provided that Biogreen Labs Memory & Focus is itself a researched supplement, so users should be careful and take into consideration potential unwanted interactions between the active ingredients or the occurrence of side-effects specific to each ingredient (headaches, increased risk of bleeding, stomach problems, irritability, etc).

Unfortunately there's no way of knowing if this particular formula is actually effective, or if it is any more effective than each of its constituents. As no clinical trials seem to have included the formula, it would be false to say that only because the individual ingredients were scientifically shown to help with memory and focus problems, the formula is also effective in helping those who suffer from such problems. Also, the number of consumer testimonial is considerably low, making us even more distrustful in Biogreen Labs Memory & Focus actual benefits. Although most reviewers gave the formula 5 out of 5 stars, some users wonder if these favorable testimonials are fake, as many of the apparently satisfied clients posted their comments the first day they used the formula, or have no record of ever commenting on any other product.