Aniracetam Review – 8 Things To Look For

Aniracetam is offered as a nootropic drug and is credited as a cognitive function enhancer. The formula is developed by Nutraceutics RX, a company based in the United States. An official web page of the manufacturer could not be identified however, although the producer appears to offer various other dietary supplements that cover different health claims.

Nutraceutics Aniracetam is available in two forms: as a powder and as capsules. The active ingredient has similar benefits to Piracetam, namely improving memory recall and alertness. The substances known as Nootropics act mainly on the Corpus Calossum, the part of the brain that links the lefts hemisphere to the right one. The main role of this white matter is to facilitate communication between the two parts of the brain: it allows the logical hemisphere (left) to efficiently communicate with the creative hemisphere (right) and this is believed to be the premise of a healthy functioning brain, and proper mental abilities.

The formula is also believed to influence the levels of two important neurotransmitters: Serotonin and Dopamine, both strictly related to how the body perceives and acts under stress. Nutraceutics Aniracetam effects may also include cognitive benefits in people suffering from neuro-degenerative conditions such as Alzheimer’s. The formulation is designed to help adults in increasing their brain abilities, including memory, concentration, focus, and creativity.

Nutraceutics Aniracetam is based on a single active ingredient.
This is a fat-soluble compound researched for its believed benefits on cognition. The substance is part of the racetams family and is regarded considerably more potent than Piracetam due to its fat-soluble properties. This translates into a higher penetration rate of the blood brain barrier, which makes it more easily absorbed in the brain. Research on both human and animal subjects revealed its abilities in reducing anxiety and symptoms of Alzheimer’s disease. The compound has gained a lot of popularity in recent years due to its subtle but impressive action on the brain, particularly on the creativity, but also because it seems to be very potent in helping people to relax, concentrate and learn faster, sleep better, and release from anxiety. Some people recommend a combination between several Nootropics from the racetams family as they seem to work synergistically towards promoting an overall health.
Some of the reported downsides of such drugs are its bitter taste, the relatively slow effect (the first improvements are not usually noticed before two weeks) and the fact that for maximum benefits the formula needs to be taken with a meal that consists in foods containing high amounts of fats).

A common side effect associated with the use of Nutraceutics Aniracetam is headaches. It has been stated that the combination Aniracetam-Choline may help in preventing such symptoms and increases the individual therapeutic effects of these substances. Nutraceutics Aniracetam reviews have been generally praising the formula’s potent effects in improving various area of mental performance. The proper dosage of Aniracetam based products was established at 750 -1500 mg per day, but this value has not been approved by any medical authority.
Although these types of formulations are considered generally safe and non-addictive, mild effects may sometimes occur in the form of headaches and anxiety.

3) What Does Aniracetam Do?

Nutraceutics Aniracetam is promoted as a supplement that can enhance overall cognitive ability. This ingredient is often believed to be a way to stimulate the interactions between the two sides of the brain. As a result, it can help a person to have more mental energy and also to be more creative.

There aren’t any reported side effects from this supplement according to the manufacturer. It doesn’t contain any caffeine or any artificial stimulants. It also doesn’t contain wheat, yeast, gluten, or soy. There are many different reasons why someone will experience diminished mental abilities. Sometimes it is due to age, and other times it has to do with various health issues.

The results someone would have from such a supplement depend on their brain chemistry. It could be worth trying for a month or so to see what types of results could occur. There are limited Nutraceutics Aniracetam reviews that we were able to find online. Some positive aspects about this supplement that consumers have mentioned include the following:

5) What You Need to Know Before Taking Aniracetam

Each bottle of Nutraceutics Aniracetam contains 60 capsules, 750 mg each. The daily recommended dose is 1 to 4 capsules. Based on that information, each bottle will last from 15 days to 2 months depending on the range of dosage a person decides right for them. The cost per bottle is therefore rather high, and many consumers prefer turning to alternative options for help. All packages are discreetly marked for your privacy during shipping. Most orders ship within three days of being placed.

The cost of shipping varies based on location and the weight of the product. The US domestic shipping versus international shipping costs should be considered. However, the website of the manufacturer is not available at the time of this review. There is no free trial on Aniracetam offered at this time. The company accepts returns within 30 days. You can buy Aniracetam based formulas from numerous online and offline retailers, including the one reviewed here.

The suggested dosage for this formula is 1-4 capsules daily.

Nutraceutics Aniracetam is a drug commonly used by individuals who want to improve their mental capacities. Although the formula is available for online purchasing as an over the counter supplement in some countries, self-medication with such substances (Nootropics) is not recommended. A professional consultation is highly advised when considering using Aniracetam supplements, mainly because research involving Nootropics is not very advanced and some unexpected reactions or drug interactions (with harmful effects on the users) are possible.

Nutraceutics Aniracetam seems to be still available for online purchasing, but from a reduced number of suppliers. Further research is however necessary to check the availability of the formula. Official information about this formula is not available at the time of this review. The lack of any testimonials from consumers is also a major disadvantage. It is also our recommendation to ask your physician before starting any treatment with such a product. 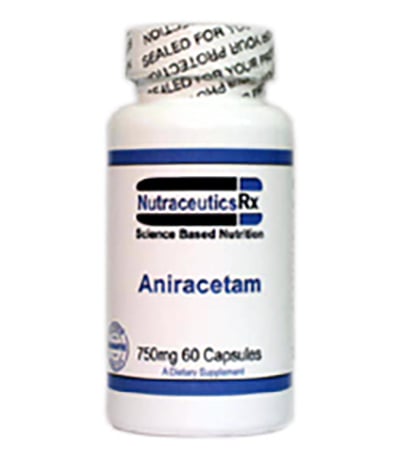 Q:
What is Aniracetam supplement?
A:

Nutraceutics Aniracetam (a drug which is marketed as Memodrin, Sarpul, Ampamet or Draganon) is part of the nootropics and neuroprotective class of drugs designed to address issues associated with depression, anxiety and cognitive impairment. The formula is manufactured by Nutraceutics. Aniracetam is used to improve memory and is thus recommended to Alzheimer's patients and other patients with medical conditions related to memory loss. Among the side effects of Aniracetam are headaches and nausea. Aniracetam effects are touted to the chemical's ability to act by balancing the Calcium levels, as well as the levels of Serotonin and Dopamine D2 receptors.

The active substance 1-Anisoyl-2-pyrrolidinone is claimed to be able to cross the blood brain barrier for long-lasting effects. Nutraceutics Aniracetam side effects includes feelings of anxiety, headache, vertigo, nausea, pain, diarrhea and insomnia. Nutraceutics Aniracetam reviews are available in very small numbers. You can buy Aniracetam based supplements form numerous retailers, however it may be difficult to find a retailer for this exact supplement as there is no official website to consult.

Aniracetam is an amino acid that is promoted as a natural method of improving cognitive functions. According to the manufacturer, there have been clinical studies to suggest this product can improve perception, memory, focus, concentration, alertness, and enhance creativity. This is accomplished through increasing communication between the two hemispheres of the brain. It is also stated to be a product that helps to regulate the various chemicals in the brain.

There are still many variables though that have to be looked at with improving cognitive abilities. As a result, it is very hard to determine just how useful this product would be for a particular person. It all comes down to their own needs and current cognitive ability as well as lifestyle choices. It is possible it could work though so it wouldn't hurt to try a bottle and see what occurs.

This product has been particularly helpful in improving recall memory and focus. After I turned 50 I started noticing that I started forgetting simple things like names of the people I knew for years. Of course, I thought it was just a sign of getting old. But then I found out about this effective way to improve the brain’s capacity. My doctor agreed to use Aniracetam for a month and see how that went. After 3 months I feel a very big difference. My memory seems to be as good as 20 years ago and I feel more alert and focused in everything that I do. I am glad I tried it and I recommend it to all those who want to preserve their cognitive function even after reaching a certain age.

Aniracetam has been a great support for me. I was having difficulties in learning and feeling overwhelmed at school because of that. During my final exams I just collapsed. Then I heard a colleague who had been taking the product for years and he was one of the top of my class. Since starting to take the pills my grades have improved my memory and concentration are better than ever, and I also feel more creative. And I didn’t experience any side effect.