ACES Vitamins Review – Is it Effective?

Carlson ACES Vitamins is a combination of three Vitamins and Selenium, a mineral essential to the normal functioning of the cognitive function and mood. The manufacturer Carlson Laboratories claims this is a potent antioxidant formulation, in which each ingredient plays a well established role as part of fighting oxidative stress.

The manufacturer is a company with more than 45 years of market experience, which has received numerous distinctions for its products and overall activity. For instance, between the years 1995 and 2005, the company has won 1st place in the Antioxidants Category of the industry prestigious Vity Awards. The company also enjoys a great reputation among its customers.

Carlson ACES Vitamins is recommended to be used by adults. The amounts of the vitamins and minerals included generally exceed the daily value recommended (sometimes by more than 900%) which is why we recommend caution.

Carlson ACES Vitamins is a blend of vitamins and minerals. According to the manufacturer, the formula is free of most allergens (milk, gluten, yeast, etc) and contains no artificial preservatives.Selenium is an important mineral found in nuts, seafood, minerals, tofu, yoghurt, beans and other foods. It has potent antioxidant properties and may help in the synthesis of proteins into antioxidants as well. Along with Vitamin E, it helps produce Glutathione, a powerful natural antioxidant. Generally, Selenium is used to promote a healthy mood and energy levels, as well as a normal cognitive function. Various studies have pointed out that Selenium deficiency may lead to mood disorders such as major depression, postpartum depression, fatigue, impaired memory, or Alzheimer’s disease symptoms.

A randomized double blind study on 341 patients suffering from selegiline delayed progression of the Alzheimer’s and taking vitamin E indicates that vitamins which increase the levels of brain catecholamine and protect against oxidative damage may actually reduce neuronal damage and slow the progression of Alzheimer’s disease. Long term supplementation of Vitamin E and C indicate a superior cognitive function and reduced risk of dementia.

You can also find a few key vitamins for brain health in OPTML NootropX.

3) Is ACES Vitamins Right for You?

Selenium is a mineral widely available in the natural environment. It is mainly known for its potent antioxidant properties and has the property to help produce even more antioxidants once inside the body. The main benefits of Selenium include improved mood, increased energy levels and enhanced cognitive function and mental clarity.

There are testimonials posted online about Carlson ACES Vitamins. What is being said includes:

The manufacturer recommends taking two soft gels daily at mealtime. The number of reviews is rather limited; however, most of them report great results.

The formula is available in bottles of 50, 90, 200 and 360 capsules. The 200 capsules bottle, which should last for more than three months costs roughly $50 at list price. This is a fair price, comparable to similar products. Certain price discounts and promotions are also available with different retailers, including the manufacturer’s website, which currently offers a 35% discount on the 360 capsules bottles. The formula is also available at stores and local drugstores.

8) Our Verdict on ACES Vitamins

Carlson ACES Vitamins promises to balance mood and to promote a relaxed, calm mind. The formula features ingredients such as GABA, B Vitamins and L-theanine, commonly used by similar products. The formula is very likely to accomplish its purpose, given that scientific research on its individual ingredients confirm their brain calming properties. There are however concerns over the effects of the formula on pregnant and nursing women, who are advised to consult a healthcare provider prior to use. We stand by the manufacturer’s recommendation and advise all patients considering taking dietary supplements to get specialized advice prior to use. 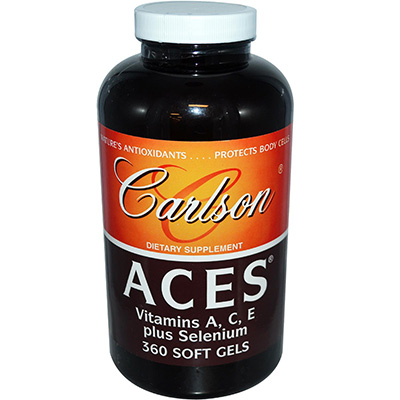 clear
Q:
What are the active ingredients in ACES Vitamins?
A:

Q:
ACES Vitamins is all about what?
A:

Carlson ACES Vitamins is marketed as a potent antioxidant formula based on the recognized health benefits of four ingredients: Vitamins A (as Beta Carotene), E and C and the mineral Selenium. The formula manufactured by Carlson Laboratories. Selenium may prevent mood disorders such as postpartum depression and fight Alzheimer's disease. Vitamin E protects cell membranes and may prevent Alzheimer's disease, when used in combination with other nutrients. Carlson ACES Vitamins contains high concentrations of the four ingredients; hence it is recommended that you consult a physician prior to use.

Vitamins and minerals are essential to a normal body function. A healthy, balanced diet is a good way of supplying your body with the nutrients it needs to function properly. Sometimes however supplementation is required, particularly because eating habits have changed to a large extent over the past decades.

Carlson ACES Vitamins contains four powerful natural antioxidants which help prevent many conditions associated with oxidative stress and free radical damage including premature aging, stroke or cognitive decline. Consumers claim the formula is efficient and are positive, although their number is limited.

All my family takes these, including my two children (1 softgel per day). It protects our minds and bodies from the damage of free radicals. Although there are no immediate visible effects, I know that on the long term we are protected.

This formula really improved my skin aspect and my overall health. I also feel more focused and energized. I’m not crazy about the smell, but it’s bearable.