There is no secret what people want from brain supplements. These brain supplements we use are claimed to boost our memory recall, cognitive abilities, focus, attention, concentration and mental energy.

NootropX is a nootropic claimed to have been formulated to enhance cognitive abilities, memory, focus, attention span, while also improving the energy levels during the day.

So what makes NootropX different? What makes it better than other similar brain supplements? Read our NootropX review to find out.

The company behind NootropX is OPTML. They sell products for brain health and function, mood, beauty, energy, pain relief, and even sports-specific supplements.

OPTML is described as a data-driven supplement company and specifically engineers products that cater to biohackers, especially those who want to maximize mental and athletic performance.

3) Details on NootropX Ingredients and Uses

Judging from the ingredients, the formula was designed to be well-rounded for brain health. It has ingredients that boost choline production, improve focus, helps clear brain fog, support memory retention, and uplifts your mood.

Particularly, using Alpha GPC is a sign that OPTML is serious about making a high quality nootropic. Alpha GPC is one of the best in the business for choline support.

The addition of BioPerine also allows every ingredient to be absorbed in the most efficient way possible.

We think NootropX works for focus, mood, and overall mental alertnes. It might have a boost in memory, but it depends on the user.

You can purchase NootropX at the official OPTML website and various online supplement stores.

As a dietary supplement, adults take two to four capsules daily with a meal, or as directed by a physician. It is recommended to start with no more than two capsules per day to assess tolerance.

9) Our Final Take On NootropX

OPTML’s data-driven research team led to NootropX, and we think they’re on point.

There is clear evidence of synergy, the ingredients used are all evidence-backed, and the ingredient forms are definitely not the generic ones.

Well, except for its B12 since we prefer methylcobalamin, but that huge dose ought to make up for minor snafu.

The reviews noted down on the supplement from its users are overwhelmingly positive, most consumers claiming that NootropX has changed their life.

Overall, NootropX may be a good choice for those looking for a good nootropic to support overall brain health. 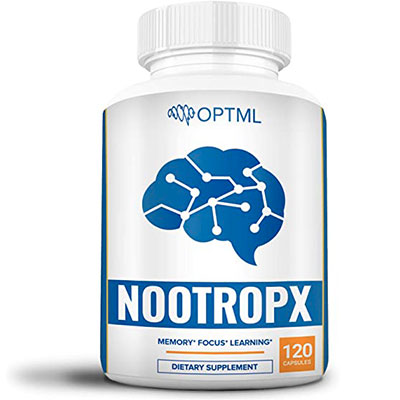 clear
Q:
What does NootropX contain?
A:

Q:
What is NootropX supplement?
A:

NootropX by Neuro Research Institute is described as a scientifically formulated blend with potent nootropic effects.

The product is produced by OPTML.

Q:
Where can I buy NootropX?
A:

You can purchase NootropX at the official OPTML website and various online supplement stores.

Q:
How much does NootropX cost?
A:

Q:
Does NootropX work?
A:

NootropX is that type of brain supplement that has some good ingredients, and enough research to warrant some of its brain health claims.

Does NootropX work? We believe the answer to that question is "yes," but within certain limits.

Q:
How should I take NootropX
A:

As a dietary supplement, adults take two to four capsules daily with a meal, or as directed by a physician. It is recommended to start with no more than two capsules per day to assess tolerance.

Q:
How do I contact NootropX customer service?
A:

Q:
Who makes NootropX?
A:

For me, this stuff works, been taking it for 90 days and my energy is through the roof. I’m 80 years old and play golf everyday then come home and cut the lawn, fix something make something, do the dishes, vacuum the home. I love this stuff can’t buy it on Amazon anymore, I’m bummed. no one paid me to write this. I will find someplace that sells this and continue to use it.
My mind is sharper, I remember everything, No more waiting for a TV commercial to do something and then forgetting what it was I wanted to do.

Title for your comment
Super stuff
Have you tried this product?
Yes
Reply