Vivactil (also known as Protriptyline) is a prescription drug used to treat depression and ADHD (Attention deficit hyperactivity disorder). The product is included in the tricyclic antidepressants group, one of the first discovered and used in the treatment of depression. The name comes from the structure of these drugs which is of 3 rings of atoms.

The manufacturer, Merck & Co, resulted from the association of 2 reputable companies: Merck and Schering-Plough in 2009. The new company has succeeded in becoming the second healthcare company worldwide.

Even though the mechanism of action is not fully known, it is believed that tricyclic antidepressants beneficial effects are a result of their ability to balance the natural neurotransmitter chemicals in the brain. Vivactil is only offered by a prescription and it is typically not offered until other forms of medication have proven to be unsuccessful. It is a product with many potentially dangerous or life-threatening side effects.

Vivactil is an antidepressant indicated for the treatment of depression and ADHD. Vivactil or Protriptyline is unique among tricyclic antidepressants (TCA) because it tends to have an energizing effect, instead of the sedative one specific to the rest of drugs from the group.

Protriptyline is used primarily to treat depression and the combination of symptoms of anxiety and depression. Like most of the antidepressants from this class it has also been used, on a limited scale, for the treatment of panic disorder, obsessive-compulsive disorder, cocaine dependency, ADHD and eating disorders.

The side effects are multiple and potentially dangerous. Some of the most common include dry mouth, constipation, urinary retention, increased heart rate, dizziness, anxiety, headache, insomnia, low blood pressure, nightmares, rapid or irregular heartbeat, rash, seizures. Being a prescription drug, Vivactil should only be taken as recommended by a healthcare professional.

3) What Does Vivactil Do?

Vivactil is a tricyclic antidepressant that is prescribed for the treatment of depression. The formula works by allowing certain chemicals to stay in the brain longer.

This product is available in tablet form and is taken three or four times a day. Vivactil uses are mainly focused on the treatment of depression but in some cases, this drug has proven to be effective for treating bulimia, anxiety disorders and fibromyalgia as well.

It is important to note that Vivactil has not been studied extensively in people under the age of 18, so it is only approved for use in adults.

There have been numerous side effects reported with the use of Vivactil or Protriptyline. They include yellowing of the eyes or skin (jaundice), suicidal thoughts or behavior, hostility or aggressiveness, engaging in unusual or dangerous activities, restlessness or inability to sit still, extreme elation or feelings of happiness that may switch back and forth with a depressed or sad mood, difficulty sleeping, anxiety, agitation, or panic attacks.

5) What You Need to Know Before Taking Vivactil

6) How Much Does Vivactil Cost?

Vivactil is a very expensive form of medication. Choosing its generic version (Protriptyline) may be a good idea if you cannot afford the treatment.

8) Our Verdict on Vivactil

Therefore, it is recommended only when other medication has failed to take effect. It is believed it works by decreasing the reuptake of norepinephrine and serotonin in the brain. In a similar way to other antidepressants, the therapeutic effects of Protriptyline appear slowly, approximately after 2 weeks of treatment. The drug is not recommended for people who suffered from heart attacks or have used MAO inhibitors within the last 2 weeks before using Vivactil.

Also, the drug may be harmful to unborn babies, therefore it is recommended to inform the healthcare professional if any of these cases apply. The use of children under 18 years old is forbidden without the advice of a doctor. 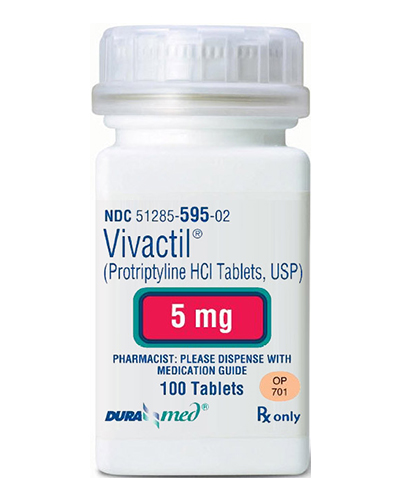 clear
Q:
What are the active ingrediens in Vivactil?
A:

Vivactil is a form of antidepressant medication aimed to help with depression and other mental issues. We were able to find numerous positive testimonials and reviews to support the Effectiveness of this drug but, as Vivactil is a prescription drug, these testimonials should not be enough to convince a patient to take this drug.

The only one entitled to decide if Vivactil is right for you or not is your doctor. It is encouraged to consult with your physician before taking any prescription medication.