Omega 3 features the essential Omega 3 fatty acids EPA and DHA and is advertised to promote a healthy heart, skin, eyes, brain, joints, and digestive tract. Ultimate Nutrition manufactures the formula, a company set up in 1979, which specializes in the manufacturing of innovative products designed to improve sports and athletic performance.

The company’s product portfolio includes various vitamins, minerals, amino-acids, fat-burners, and Omega 3 formulations. Some of the most popular products marketed by the company include Iso Mass Xtreme or Hyper Start.

Omega 3 fatty acids are essential for the normal development of both children and adults. The formula is particularly recommended to adults. Although a daily dosage is not established, most scientists recommend a 600 mg to 1000 mg dosage per day of cumulated EPA and DHA to ensure optimum levels.

Omega 3 is a combination of two of the most important Omega-3 essential fatty acids, called EPA and DHA. They are not produced by the body and have to be obtained from diet or supplementation. Food sources include such as fish and certain types of algae. Omega 3 EPA and DHA are found in high concentrations in the brain and the retina. Hence their importance to normal brain functioning is unquestionable.

EPA and DHA play an important role in reducing inflammation and are known to have blood-thinning properties. Research shows Omega 3’s may help reduce stroke, heart attacks, or coronary artery disease. Substantial evidence shows that Omega 3 may help with mood disorders such as depression, particularly in lowering bipolar disorder symptoms.

Some studies show that children with ADHD may improve their cognitive functions after taking Omega 3. However, further research is needed to confirm this benefit. Also, there is evidence that regular consumption of Omega 3 may lower the risk of developing age-related memory impairment, age-related memory loss, and neuro-degenerative severe disorders such as Alzheimer’s disease. Here to results are inconclusive.

Although there are many nutritional supplements based on Omega-3’s effects, Omega 3 promises to deliver the proper amounts of its contained fatty acids to improve areas like joint flexibility, cognitive health, and skin quality.

Even though these fatty acids can be delivered to the body by consuming ailments like fish or algae, people prefer to take them in the form of supplements due to their stressful daily lives. Compared to nothing, it is a good alternative.

In this particular product, the fatty acids found in higher concentrations are DHA and EPA. They are mostly known for their blood-thinning properties. Evidence showed that Omega 3s usually focus on enhancing cognitive-related activities, like reasoning, concentration, focus, alertness, and memory, while also protecting the tissues of the heart, avoiding potential heart attacks.

Also, it may help with symptoms of certain mood disorders that include depression and bipolar disorder. However, further research is required for confirming these properties.

Because most of the memory degeneration and loss occur due to aging processes, elders should think about providing the body with the necessary nutrients to avoid serious problems, such as Alzheimer’s, Parkinson’s disease, short or long-term memory loss, and memory impairment. Unfortunately, few clinical studies link the direct effects of Omega 3s to improving the health of those with Alzheimer’s, and most of them are inconclusive.

There are online testimonials about Omega 3. What is being reported includes the following:

5) Precautions of Omega 3 Use

Found for purchase by bottles that contain 90 capsules each, Ultimate Nutritional Omega 3 is viewed as a moderately-priced product, depending on the place of purchase. It can be found both on the manufacturer website, but also on other online or offline retailers. A bottle is generally sufficient for 30 to 45 days of usage, depending on the daily intake. International shipment is only made available for Australian customers.

There is no free sample or a money-back guarantee. Still, there is a contact number on the official manufacturer page for unsatisfied people after the purchase or desire more information about the product.

There are no consumer reviews regarding the formula posted online. The manufacturer recommends taking one tablet is taken three times daily, which contains 300 mg of EPA plus DHA. No precautions or side effects are mentioned for Omega 3; however, Omega 3’s may increase bleeding risk.

Omega 3 contains Omega 3 extracted from fish oil and is advertised to support several essential functions, including the nervous system, the heart, joints, and the digestive system. Unfortunately, there are no consumer reviews online, which we could access to evaluate the formula’s actual effectiveness.

This supplement has increased in popularity over the past decades. More research was conducted, and research results became widely available. However, you should know that Omega 3 may increase bleeding risk and potentially interact with blood-thinning medication. At the same time, some of its medicinal applications still have to be supported by scientific evidence. This is why we recommend you consult a healthcare provider before using any Omega 3 formulation, including Omega 3. 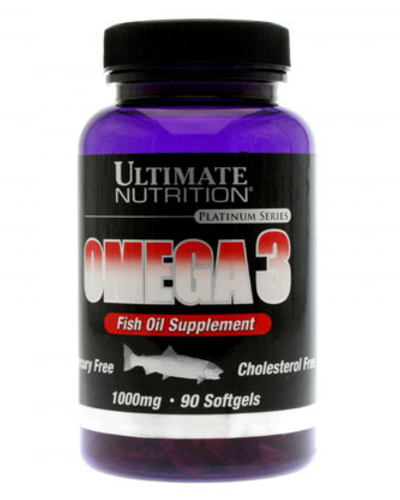 Customers Questions and Answers with Omega 3

clear
Q:
What are the active ingrediens in Omega 3?
A:

The manufacturer is Ultimate Nutrition and presents this product as an excellent alternative to prescribed medication for allergies, depression, cancerous cellular decrease, mild-cognitive impairment, dementia, and Alzheimer's disease. However, there are no clinical studies that support these claims.

Overall representing a formulation based on the effects of Omega 3's fatty acids, EPA and DHA, Ultimate Nutritional Omega 3 is available for purchase for people from the United States or Australia. The remedy focuses on stress relief, cognitive system improvement, and movement enhancement by positively influencing joint flexibility.

Although mostly recommended for adult usage, the treatment can also be followed by children with conditions like dementia or ADHD, but only after consulting a specialist.

Even though the manufacturer makes no explicit statements regarding its potential effects, people may experience nausea, diarrhea, headaches, or heartburn if the standard dosage is exceeded.

I bought this product out of curiosity, but after only two weeks of treatment I feel like I have more energy to do the things I want. So yeah, I recommend it

I used to have such bad migrenes and nothing seemed to help. One day I decided I want to try some natural supplements and I bought this one. My headaches didn’t go away completely, but I’m definitely feeling better.