Thorazine (chlorpromazine) is a form of prescription medication marketed under a number of different brand names. The current review refers to the product offered by GlaxoSmithKline. GlaxoSmithKline is one of the three largest pharmaceutical companies in the world ranked by income with a product portfolio that counts hundreds of products marketed worldwide and almost 100 thousand employees.

The drug is indicated in the treatment or to control a variety of conditions as follows such as schizophrenia, nausea, porphyria, tetanus (adjunctive medication), manic-depression, etc. The drug is also supposed to be effective in the treatment of a number of conditions affecting children, such as severe behavioral problems (in children aged between 1 to 12 years old) or hyper-activity accompanied by excess motor activity and conduct disorders (short-term treatment).

Thorazine should always be prescribed by a healthcare practitioner and should not be taken in the absence of close medical supervision.

Thorazine is generally known as a treatment for schizophrenia, although it has a wide spectrum of applicability in a variety of psychotic disorders and severe behavioral conditions in both adults and children. Although the precise mechanism of action of chlorpromazine (the active substance on which Thorazine is based) is not fully understood, we do know that the substance is an anti-psychotic medication, part of a class of drugs called phenothiazines.

Basically, chlorpromazine works by changing the actions of key chemicals in the brain, impacting all levels of the central nervous system, as well as multiple organ systems.

The product should not be used in psychotic conditions related to dementia because it may cause extremely dangerous side effects such as heart failure, pneumonia, and even sudden death. Patients suffering from liver or kidney diseases, glaucoma, severe asthma, a history of seizures, Parkinson’s disease, adrenal gland tumor, breast cancer and other conditions should discuss treatment possibilities with their doctor.

3) What Does Thorazine Do?

As stated above, Thorazine is a very powerful form of prescription medication aimed to treat the symptoms of severe bipolar disorder, schizophrenia and other serious mental health disorders.

In some rare cases, Thorazine is prescribed for children. According to the manufacturer, this formula is effective n controlling the behavior of children who are aggressive or hyperactive. This drug is also prescribed for individuals with severe nausea, chronic hiccups, and various forms of restlessness as part of a treatment plan.

The daily dose of this medication depends on the needs of the patient. The standard dose is one pill every 4 to 6 hours. The treatment will start with a low dose that will be increased as needed. Please note that Thorazine may cause allergic reactions, rash, swelling, fever, and trouble breathing. It is important to report to your doctor immediately if such reactions occur.

Just like with all prescription drugs, Thorazine has been associated with various unwanted side effects. Among the most common ones are nausea, vomiting, dry mouth, insomnia, irritability, headaches, changes in appetite, and memory loss.

5) What You Need to Know Before Taking Thorazine

6) How Much Does Thorazine Cost?

Thorazine is more expensive than other similar antidepressants. However, there are programs to help pay for it if a person can’t afford it. Most insurance plans and prescription coverage programs do cover this particular medication.

Dosage depends on the severity of the condition being treated, age of the patient, etc, therefore a medical evaluation is strictly recommended.

8) Our Final Take On Thorazine

Like any prescription drug, Thorazine has been associated to a number of potentially harmful side effects including, but not limited to: twitching or uncontrollable movements (of the eyes, arms, tongue, face), seizures (in the form of black-outs or convulsions), stomach pain; confusion, rapid breathing, fever, agitation and restlessness, vomiting, chest pains, etc.

This is a prescription drug and should only be used on doctor’s orders and under close medical supervision, especially since the drug is known to cause serious damage to several categories of patients suffering from other health conditions and disorders.

The product received good consumer reviews, being a rather common drug prescribed for patients with treatment for schizophrenia and a number of other disorders. 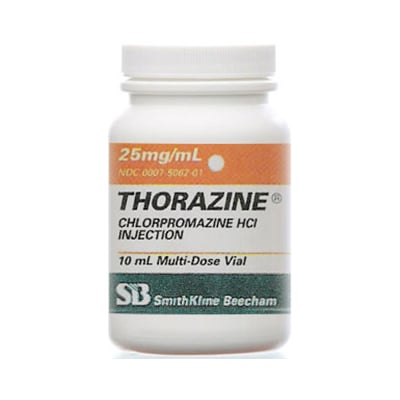 clear
Q:
What does Thorazine contain?
A:

Q:
What is Thorazine supplement?
A:

Thorazine is a form of prescription medication, and it cannot be purchased legally without a doctor's written consent. Furthermore, your doctor is the only one fully entitled to decide if this product is good for you or not.

Most users give a positive response when asked about this product but please note that testimonials are not that relevant when it comes to prescription medication.