Glucosamine & MSM Review – 8 Things You Should Know Before You Buy

Glucosamine & MSM is a dietary supplement particularly designed to reduce arthritic pain. According to Golden Glow, the manufacturing company the formula’s advertised benefits are based on the properties of two essential ingredients: Glucosamine and MSM (methylsulfonylmethane). While Glucosamine helps preserve and repair structure and function of the cartilage (and hence joints), MSM has the ability and potency to temporarily relief pain associated to osteoarthritis.

The manufacturing company behind this formula is a reputable Australian company. Golden Glow has a market practice of more than 35 years. It was established in 1976 and claims to have delivered more than 6 million orders worldwide since. The company manufactures and sells more than 300 dietary supplements, but is also focused on offering high-quality pre- and post-purchase services. These services include a 30-day money-back guarantee, quick order turnaround and the possibility that all company clients or potential clients consult for free the services of a naturopath team. The naturopaths are trained to answer any questions regarding the company’s products and can be reached through the manufacturer’s official website.

Glucosamine & MSM is recommended for adults who experience pain caused by osteoarthritis. The formula contains Selenium; the manufacturer warns that the recommended dose is not exceeded.

1) Glucosamine & MSM at a Glance

Glucosamine & MSM is based on two ingredients. While Glucosamine enjoys much popularity as a joint and cartilage health remedy, MSM is less known, and research is still in its beginning.

Glucosamine is a substance naturally produced inside the body and is present in human cartilage and in the synovial fluid of joints. There are several research studies which indicate supplementation with glucosamine is effective in managing osteoarthritis and Inflammatory Bowel Disease. A direct link between Glucosamine supplementation and increased joint mobility (or any other improvement in osteoarthritis symptoms) has not been established however. Many clinical research studies actually deny Glucosamine having any benefit on joints. Usually Glucosamine is featured in combination with chondroitin sulfate. Studies indicate Glucosamine is generally safe and causes only minor and rare adverse effects such as gas, nausea, heartburn, bloating, indigestion, and diarrhea.

MSM or methylsulfonylmethane is generally used for its ability to reduce pain. The synthesized compound is able to provide a vital element for joints and cartilage, particularly sulfur, and methyl groups, essential to energy production processes. Many scientists claim MS is able to provide long-term maintenance and prevention supplement. Research is still in its early stages; MSM’s safety should be discussed with a healthcare practitioner.

3) Does Glucosamine & MSM Work and it is Safe?

Glucosamine & MSM Plus combines glucosamine and MSM into a single formula. Also, it includes trace minerals which should also promote wellness.

The effectiveness of glucosamine based formulas is surrounded by controversy. Large clinical trials have been conducted to determine if it can stop the destruction of cartilages and prevent arthritis but the results have been contradictory. Some found that supplementation with glucosamine may promote cartilage degeneration (as glucosamine is a precursor of glycosaminoglycans, a major component of joint cartilage), while others found no better results than placebo. Further evidence is needed to determine how this compound works and whether its efficacy differs from one individual to another.

The situation is the same with Methylsulfonylmethane (MSM). This organosulfur compound may also play a role in the prevention of osteoarthritis, but the results of numerous randomized controlled trials conducted to confirm its Effectiveness have also been contradictory. The use of both glucosamine and MSM appears to be safe in the short term, but further research is needed to assess its safety for long-term use.

This product sold in different quantities and the price varies depending on the size of the container. Nevertheless, Glucosamine & MSM Plus has great value in general, the price per unit being very low.

Numerous retailers sell this product, both online and offline. Discounts and money-back guarantees may be offered. The manufacturer also sells this supplement directly via their website. Their prices are usually lower than those provided by other retailers.

7) How to Take Glucosamine & MSM

The daily recommended intake of Glucosamine & MSM is two capsules.

Joint pain and reduced joint mobility seem to be inevitable for most of us. This is why more and more people start wondering what they can do to stave off joint pain and conditions that impede the normal functioning of joint. Glucosamine & MSM is suggested as both a preventive remedy, and as a treatment of arthritis symptoms. Both Glucosamine and MSM are well known, well-researched substances. Few side effects have been found for Glucosamine, while MSM’s use for more than 12 weeks is not systematically studied. It is our constant recommendation that you search the advice of a specialist before deciding which treatment alternative to chose. 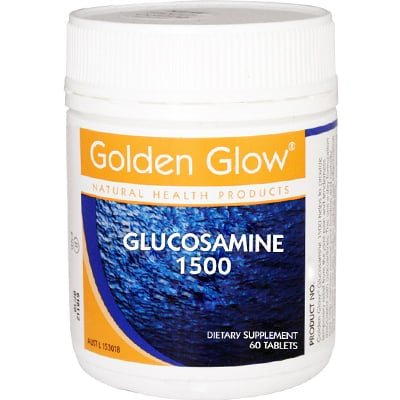 clear
Q:
What does Glucosamine & MSM contain?
A:

Q:
What is Glucosamine & MSM supplement?
A:

Advertised to fight against arthritic symptoms, Glucosamine & MSM is a dietary supplement which contains two ingredients, each of them having a different mechanism of action. The formula is manufactured by Golden Glow, an Australian company. Glucosamine is a substance naturally produced by the body and essential to the structure and function of joints (cartilage), while MSM should assist with and bring faster and greater relief from associated pain. Glucosamine & MSM is designed for the use of adults who suffer from osteoarthritis.

It is hard to determine the Effectiveness of Glucosamine & MSM Plus in the absence of concrete scientific evidence. Even though Glucosamine and MSM are not completely recognized as treatments for arthritis nor have they been shown to prevent cartilage deterioration, many people report feeling better after taking these substances.

Please note that this product contains Selenium, which is toxic in high doses. A daily dose of 150mcg for adults of Selenium from dietary supplements should not be exceeded.

I noticed some improvement in my pain, but it was short-lived. I needed something stronger I guess.

Because of a nasty injury in my shoulder, I was prompted to take this a couple of years ago. It helps me a lot with managing pain and mobility. It is great!