Super Complete Formula is promoted as a dietary supplement which relies on a wide array of ingredients and promises to offer optimal nutritional amounts for regular people who are too busy to feed themselves following all the rules of healthy foods or to have a good exercising program on a regular basis. The business behind this remedy is named Ultimate Nutrition and has been on the alternative medication area for quite some time.

The business was established by Victor H. Rubino in 1979. Its founder was known at that time as one of the best amateur lifters on a national scale. A particular feature of the company is that in the late 1970s as well as early 1980s was within the first to sell protein powders, fat burners and tablets based on amino acids. One of their best-selling products was Sports Energizer, a drink beverage that features ten flavors and helps the body by boosting its energy levels.

Super Complete Formula which is the base for this supplement possesses a lot of vitamins, minerals, amino-acids, as well as antioxidants which seek to provide a general support to the body in order to fight against radical damage more vividly and with more strength than usual. Furthermore, it is presented as a unique formula, thus it should differentiate from others with the same purposes found on the supplementation area.

1) What is Super Complete Formula?

Super Complete Formula represents a multi-vitamin approach which also contains several amino-acids, minerals and other nutrients that have been included in order to enhance its results. On the other hand, most of its featured components appear to be off-the-charts when it comes to the daily suggested quantities and as far as the product’s description goes, from a serving a person can get approximately sixty seven percent more than the needed Thiamin value, for instance.

Research revealed, Thiamine is the most important vitamin from the B-vitamins group. It has the property of being water soluble, thus excess amounts are easily eliminated through urine. Due to this, quantities of this component need to be constantly replaced so the organism can function properly. It has a crucial role when it comes to main chemical processes of the body and its beneficial effects are observed in heart, muscles, and nervous system. A possible deficiency manifests through symptoms such as appetite loss, leg numbness, fatigue, and in the more difficult situations, nerve and brain damage, and psychosis.

This product is a multi-vitamin blend that also features certain amino-acids and minerals which are meant to improve its effects. However, most of its contained ingredients appear to be off-the-charts in regards to the daily suggested value and according to its labels, from a serving, an individual can get somewhere around sixty seven percent more than the required Thiamin amounts, for example.

As researched showed, Thiamine is the leader among the B-vitamins group. It is water soluble, thus excess quantities are easily excreted with the help of urine. Because of this, amounts of this ingredient have to be replaced on a daily basis in order for the body to function within proper parameters. It possesses a crucial role when it comes to chemical processes of the organism and has a beneficial effect when it comes to muscles, heart, and nervous system. A potential deficiency manifests pretty harsh and includes symptoms like appetite loss, fatigue, leg numbness, and, in the worst situations, brain and nerve damage and psychosis.

People should know that supplements that contain this component have to be consumed in a prompt manner because the refrigeration for more than twelve months means a loss between twenty and sixty percent of contained Thiamine. On the other hand, excesses of products that contain it are not a reliable solution either. On occasions, they may determine the appearance of unwanted side-effects which include restlessness, sweating, nausea, or a tight feeling in the throat.

There are online customer testimonials about Super Complete Formula. What is being reported includes the following:

This product comes in two forms, 135 count and 270 count formula tablets, and is found online either directly on the manufacturer website or other retailers. Its price is viewed as affordable by some while others believe it doesn’t worth the money it’s accounted for, thus making it rather expensive. Even though opinions are divided, on average, it’s found for moderate prices. International shipment is also made available, but it’s better for people outside the United States territory to buy it from a local store or a nearby distributor. It comes in form of tablets which are easy to swallow.

It is important that supplements featuring this ingredient are consumed in six months from their production because afterwards, the nutritional value is progressively lost. On situations, they may lead the appearance of harmful side effects which such as restlessness, nausea, sweating, or a tight feeling in the throat.

8) Our Verdict on Super Complete Formula

All in all, Super Complete Formula is advertised as a good source of essential minerals, vitamins, and amino-acids that should improve the strength of the body, thus making it more powerful in the fight against oxidative damage on a regular basis. It can be consumed by anyone and possesses no restrictions as far as the producer claims on the official website. On the other hand, individuals with known allergies to some of its components as well as lactating or pregnant women should better ask the advice of a healthcare provider before beginning its utilization. If any appear, the treatment should be interrupted. 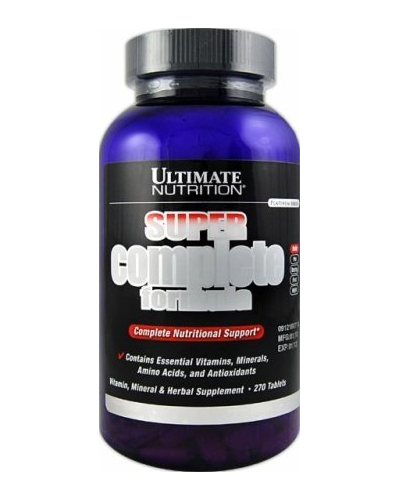 Q:
What is Super Complete Formula?
A:

Super Complete Formula represents a multi-vitamin and mineral blend which focuses on the body's overall enhancement, particularly for people who either live stressful lives or don't have the time to properly eat or go through exercising sessions. It is a product designed by Ultimate Nutrition and it comes in 135 and 270 formula blend. Furthermore, it's claimed to have a positive impact on the daily oxidative damage due to high amounts of antioxidants.

Overall, Super Complete Formula is presented as a reliable source of essential vitamins, minerals, and amino acids which should enhance the strength of the organism, thus making it more powerful against the damage done by free radicals on a daily basis. It can be taken by anyone and has no restrictions as far as the manufacturer states on the official webpage. However, people with known allergies to some of its ingredients as well as nursing or pregnant females should better consult a healthcare provider prior to beginning its consumption. In case any harmful effect is noticed, the utilization should be interrupted and only began again after it completely disappeared.

I do believe this product is a good source of vitamins. Since I’ve started taking it, I had no headaches and could sleep better!

My husband really likes these vitamins and I am so glad to be able to get them on Amazon. They are the only vitamins he will take..I on the other hand can not stand the smell of them..