Snore Control Review – 8 Things You May Not Know

Snore Control is a water based oral spray for people with snoring problems, including slow labored breathing and stuffy nose. It’s sold by the 27 year old company KingBio. They’re located in Asheville, North Carolina, and focus on homeopathic products. They use standard Good Manufacturing Practices (cGMPs) which many reputable companies also use. KingBio sells a wide variety of products which may be able to meet a similarly wide variety of needs. Not all of their products have been properly scientifically tested, though, so keep an eye out for disclaimers.

1) Snore Control at a Glance

Snore Control mostly has water, probably 99.9 percent or more. It claims to also have diluted versions of 12 other ingredients. This includes Cuprum metallicum, Phosphoricum acidum, Rhus toxicodendron, Stramonium, and Zincum metallicum. Stramonium refers to Datura stramonium, a plant with many names, including Jimson weed and Devil’s snare. It’s a part of the famous nightshade family. Every portion of Datura stramonium is toxic, and careless use of it can easily result in death. In traditional Indian (Ayurvedic) medicine it has been used to treat asthma symptoms, and later it was used as an anti-inflammatory and burn salve. The plant can also cause intense hallucinations when used in certain near-fatal concentrations. American Indians used Datura stramonium in some spiritual rituals. It has also been used in Voodoo.

This product uses purified water as its base, and water makes up the vast majority of ingredient concentrations (if not 100 percent). The HPUS active ingredients are Bromium, Chamomilla, Cinchona officinalis, Helleborus niger, Laurocerasus, and 7 other substances. Helleborus niger is commonly called the Christmas rose. It’s toxic and can cause burning of the eyes and throat, but was once used to treat paralysis, insanity, and more.

Laurocerasus is Prunus laurocerasus, also known as cherry laurel and the common laurel. Sometimes it’s confused with a cousin, Prunus caroliniana, or the unrelated Laurus nobilis (“the true laurel”). Prunus laurocerasus is an evergreen shrub or small to medium-sized tree. Crushing the leaves releases a smell similar to almonds. The leaves, fruit, and seed are all considered poisonous. It’s quite not as deadly as some other plants, but can cause severe discomfort if ingested. It gets its reputation because it contains the poison prussic acid (hydrocyanic acid), along with other substances. Prussic acid is also known as the infamous Hydrogen Cyanide. Under the name Zyklon B, it was used in Nazi extermination camps during World War II. Large amounts can be used in chemical warfare, and is therefore manufacturers of hydrogen cyanide are closely regulated.

Each two ounce bottle probably has an average price. It depends on where you find it and how often you use the product. For some people, it will be viewed as inexpensive. You can also rest assured with their 90 day money back guarantee. KingBio’s website doesn’t specify if they refund you shipping costs. As for the other storefronts you can find this product at, they may have different return policies. You’ll have to check if the place you’re looking at offers free shipping or other services. In most cases, people living in North America have the easiest access to this company’s products.

Cuprum metallicum is the natural form of the element copper. In homeopathy it’s dissolved with lactose sugar, ground into a fine powder, then heavily diluted and filtered with water. It can allegedly help with respiratory problems, coughing, and joint pain. It’s rarely prescribed and long term use can lead to significant problems, depending on the concentrations of Cuprum metallicum in whichever product you’re taking. Likewise, Zincum metallicum is simply zinc, a common mineral in multivitamin supplements. It’s chemically similar to magnesium. Copper is not used in modern medicine except to treat copper deficiency, which is rare because the element is present in common foods. Zinc is more useful because it may help protect your eyes, skin, and immune system; it may also function as an indirect antioxidant.

This is mostly purified water, so it’s bound to be safe. People of all ages will be able to use this product without worrying about side effects. It’s not entirely clear how much of each “active ingredient” is really inside this product. Despite the company’s lengthy history, there are almost no independent testimonials (such as customer reviews) about the usefulness of their products. On the surface, it doesn’t appear that this product can make a big difference in your life. But when all other solutions fail, give it a try. 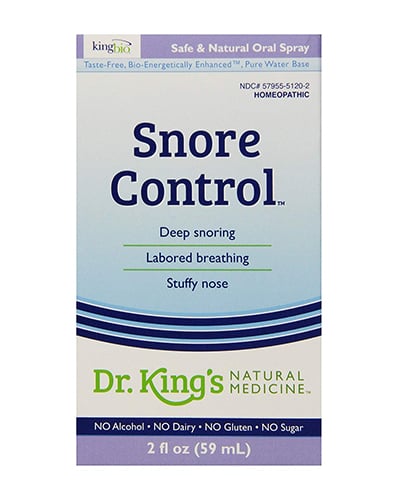 clear
Q:
What are the active ingrediens in Snore Control?
A:

Q:
Does Snore Control work?
A:

KingBio appears truthful and reliable regarding some of its claims. The remaining claims are difficult to verify, since homeopathic medicine is notoriously unreliable. It works well for some people, and doesn't do anything in other people. While this is to be expected with supplements and medicine, a common failure rate for nootropics and prescriptions is sometimes considered 10 percent or less. Homeopathy is more of a 50-50 chance. But when it works, it's often a very safe and worry-free natural remedy.