Sitting Pretty Balm is an herbal balm promoted as being effective in the treatment of varicose veins and hemorrhoids in particular. The company behind this formula is Mountain Rose Herbs.

Mountain Rose Herbs processes and distributes many herbal extracts and spices which it usually acquires from American certified organic farmers. It also works however with foreign suppliers. The company has also launched its own lines of herbal remedies (like salves, tinctures, infused herbal oils) and cosmetic products, as well as herbal teas and home and gardening accessories and tools. One of the core values of Mountain Rose Herbs is to support ecological agricultural practices and it has even won some rewards given its continuous efforts to promote sustainable farming.

Mountain Rose Herbs claims that Sitting Pretty Balm is a potent and astringent formula with soothing properties. According to the producer, it may provide relief from hemorrhoids and varicose veins disorders, while also being able to prevent this type of medical conditions. The formula is based entirely on natural ingredients of which most are certified organic or wild harvested. The producer does not give details on who should use or not use Sitting Pretty Balm. Therefore we believe you should consult with your healthcare practitioner before using it.

Sitting Pretty Balm is an herbal balm which contains only herbs and natural preservatives and thickening agents (like the vitamin E oil, the olive oil, and the beeswax in which the active herbs are infused). One key ingredient that has even been tested in clinical trials for its effectiveness in treating hemorrhoids is witch hazel. Witch hazel may provide only temporary relief from the pain and itching sensation usually associated with hemorrhoids. The plant also has other uses, based on folk medicine. These include poison ivy blisters, diaper rashes, fever and tuberculosis. As for side effects, this herb may only cause some mild skin rashes when used topically. Internal use in large amounts could cause liver damage and stomach problems.

The plants used in this formulation are recommended for skin conditions, gastrointestinal problems, depression and other nervous system disorders, coughs and colds. As a result they may interact with medication for these illnesses. Therefore you should consult a doctor if you are planning to use Sitting Pretty Balm for longer periods of time.

The Food and Drug Administration has not evaluated the formula’s quality and effectiveness therefore the producer has to mention on the label that Sitting Pretty Balm is not intended to treat any illnesses. This is the case with many herbal products.

Sitting Prety Balm is an herbal formula based on witch hazel and yarrow which are recommended for hemorrhoids, although scientific research about the Effectiveness of yarrow is pretty scarce. Butcher’s Broom is often recommended for varicose veins so it might also work in the treatment of hemorrhoids.

Witch hazel has been shown in scientific studies to alleviate unpleasant symptoms associated with hemorrhoids like itching and pain. However, specialists do not advise using it if in the case of bleeding. The plant extract is usually applied topically in a sitz bath. However, it provides relief only temporarily. Anecdotal uses of witch hazel include skin conditions (poison ivy, diaper rashes, sunburn), fever and colds symptoms, injuries and tuberculosis. According to laboratory tests, witch hazel is a potent anti-inflammatory and astringent, as well as having antimicrobial activity.

The plant is considered safe as only milk skin irritations have been reported when applied on the skin. However, it may be toxic to the liver if used in large amounts. Moreover, it might cause some stomach upset when taken by mouth.
Sitting Pretty Balm is an herbal product that can be marketed without having previously been evaluated by the Food and Drug Administration regarding safety and quality.

The manufacturer does not give too many details on how often to use the balm on its site. Also, it does not say anything about side effects, if any.

We have not found online customer testimonials about Sitting Pretty Balm, therefore, we do not know whether customers have been satisfied with this salve.

6) How Much Does Sitting Pretty Balm Cost?

The Sitting Pretty Balm formula comes in two sizes: one ounce and two ounces. The price for one ounce depends on the size of the container. The average price per ounce would recommend it as an affordable formula.

It can be purchased directly from Mountain Rose Herbs, by placing your order on their official website. You may also order by telephone, by fax, by mail or by email. The company offers a two-month money back guarantee for the majority of its products, and it does not charge restocking fees. In other words, customers will get a full refund.

When ordering from the producer, you have to also pay attention to the shipping charges they will charge you as they are pretty high. The product cannot be found in many online stores. Online retailers tend to sell at higher prices than the producer.

The balm is sold in tins of one or two ounces. On its website, Mountain Rose Herbs does not list side effects or clear use directions.

Sitting Pretty Balm is recommended as an effective formula for varicosities and hemorrhoids in particular. It contains ingredients which back up its effectiveness as they have been traditionally used in folk medicine for treating varicose veins. Nonetheless we believe you should ask for medical advice if you plant o use it regularly as the producer does not give details on its side regarding potential side effects or a maximum recommended dose. Moreover Sitting Pretty Balm has quite a limited number of online customer testimonials therefore we do not have sufficient empirical evidence that the product works or whether it is safe. 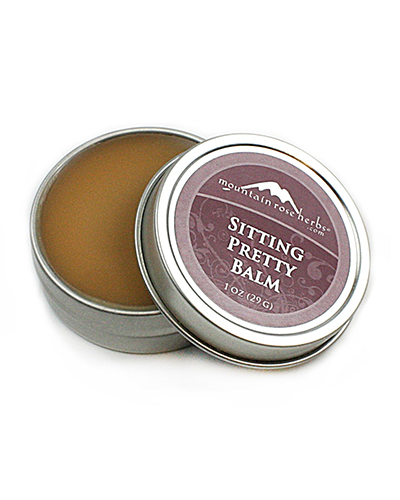 clear
Q:
What are the Sitting Pretty Balm ingredients?
A:

Q:
Sitting Pretty Balm is all about what?
A:

Sitting Pretty Balm is an herbal formula that is recommended for easing symptoms associated with hemorrhoids and other types of varicosities. It may also be used just to prevent the formation of varicose veins. It is produced by Mountain Rose Herbs. It contains ingredients like witch hazel and butcher's broom which are generally recommended for enlarged and painful veins. The producer does not mention side effects in relation to Sitting Pretty Balm on its website .

Q:
Are Sitting Pretty Balm benefits actually a reality?
A:

Sitting Pretty Balm is an herbal remedy that may help in treating hemorrhoids. It contains herbs like witch hazel, butcher's broom, and yarrow which are recommended by herbalists in treating painful and swollen veins. As a result, we believe that this formula may offer good results. Nonetheless, it does not seem to be popular as it does not seem to have online consumer reviews.

While herbal products are increasing in popularity mostly because of the side effects of chemical drugs, you should ask for medical advice before using Sitting Pretty Balm. Some of the herbs it contains may interact with other medications or may not be safe if you suffer from certain medical conditions. Yarrow may interact with blood thinners and like St. John's Wort may increase sunlight sensitivity.

I bought Sitting Pretty Balm for my father who is 72 years old. He said it works quite well.