How many ingredients does it take to make a powerful fat burner?

According to RSP Nutrition, just four when they came out with Quadralean.

The fat burner claims to have scientifically researched ingredients capable of helping you burn fat while preserving lean muscle. Hence, the name.

QuadraLean promises to be one of the better weight loss supplements, but does it deliver?

Read our QuadraLean Review to find out.

1) RSP Quadralean at a Glance

2) The Company Behind RSP Quadralean

Quadra Lean is produced by RSP Nutrition, a company whose roots go back to 2008 with founder Victor Davanzo, who was a collegiate athlete at the time.

RSP Nutrition sells a variety of supplements across multiple categories including protein, pre workouts, fat burners, vegan, and even keto.

Some of their best-sellers include:

We have firm reason to believe that QuadraLean, if nothing else, works well as a metabolism booster and appetite control supplement.

The ingredients are premium or standardized, the doses are mostly on point, and there is clear evidence of synergy.

The only questionable part is whether CLA will work as intended since it often needs over a gram to have any positive effects to our metabolism and muscles, at least that’s what most studies say.

However, the ingredient does come in as the branded Innobio, so maybe there’s a chance that it’s much more bioavailable and more potent than standard CLA.

6) Where to Buy RSP Quadralean?

You can buy QuadrLean from the official RSP Nutrition website or from other online supplement retail stores.

Take three capsules on an empty stomach twice daily. For best results, take 30-60 minutes before meals with the first serving before breakfast and the second serving before exercise. Do not exceed 6 capsules in a 24-hour period.

9) Our Final Take On RSP Quadralean

Adding ingredients that are not only known to help with weight management, but also branded or standardized definitely makes the supplement feel premium and well-researched.

The angle RSP Nutrition went with QuadraLean is mostly about appetite management plus an extra metabolism boost, and we think the supplement works as intended.

The only questionable benefit is whether CLA can actually do something worth noting or if it’s just here to make the supplement more expensive.

Regardless, CLA is a quality and must-try weight management supplement that won’t cost an arm and a leg, unlike the newer formulas out there. 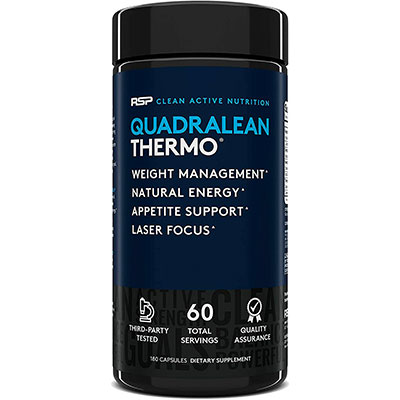 clear
Q:
What are the core ingredients in RSP Quadralean?
A:

Q:
What is RSP Quadralean?
A:

Quadra Lean by RSP Nutrition is one of the many weight loss supplements available on the market. It uses four key ingredients plust Chromium to control appetite, trigger various fat burning processes, and maybe touch on muscle preservation while on a diet.

RSP Nutrition claims their product will support the weight loss process, metabolism, and will improve energy levels - when taken as recommended.

Q:
Where can I buy RSP Quadralean?
A:

You can buy QuadrLean from the official RSP Nutrition website or from other online supplement retail stores.

Q:
How much does RSP Quadralean cost?
A:

Q:
Can I take RSP Quadralean if I'm pregnant or nursing?
A:

RSP Nutrition strongly advises against it.

Q:
How should I take RSP Quadralean
A:

Take three capsules on an empty stomach twice daily. For best results, take 30-60 minutes before meals with the first serving before breakfast and the second serving before exercise. Do not exceed 6 capsules in a 24-hour period.

Q:
How do I contact RSP Quadralean customer service?
A:

Q:
Can I return RSP Quadralean?
A:

They offer 100% Money Back Guarantee

Q:
Who makes RSP Quadralean?
A:

The company behind QuadraLean is RSP Nutrition.